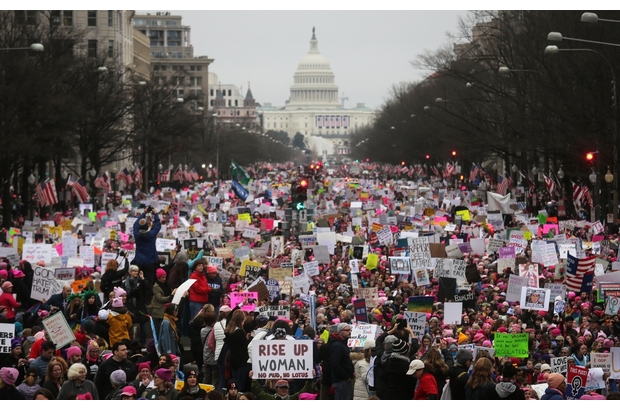 HANNAH TAAFFE writes about what we can do to keep the momentum of the Women’s Marches going.

Looking at the figures from last weekend’s #WomensMarch, it’s easy to feel hopeful. In London alone, the crowd protesting Trump’s first day of presidency amassed 100,000 people, many of whom didn’t even make it to the rally in Trafalgar Square as they were still slowly snaking their way through the streets of London, three hours after the march took off. With the winter sun shining down on London, you couldn’t help but feel the positivity in the air – love really does trump hate, the pussy will grab back.

Yet, just two days later, the bubble burst when President Trump signed the Mexico City Policy. This executive order prevents United States federal money from funding non-governmental organisations worldwide which provide information on abortions – despite the fact that it has been linked to a rise in the rate of abortions in Sub-Saharan Africa. Although the “Global Gag Rule”, as it is commonly known, has been a political football for more than three decades, its instatement two days after the Women’s Marches dealt an especially harsh blow, and proved that marching alone isn’t enough. 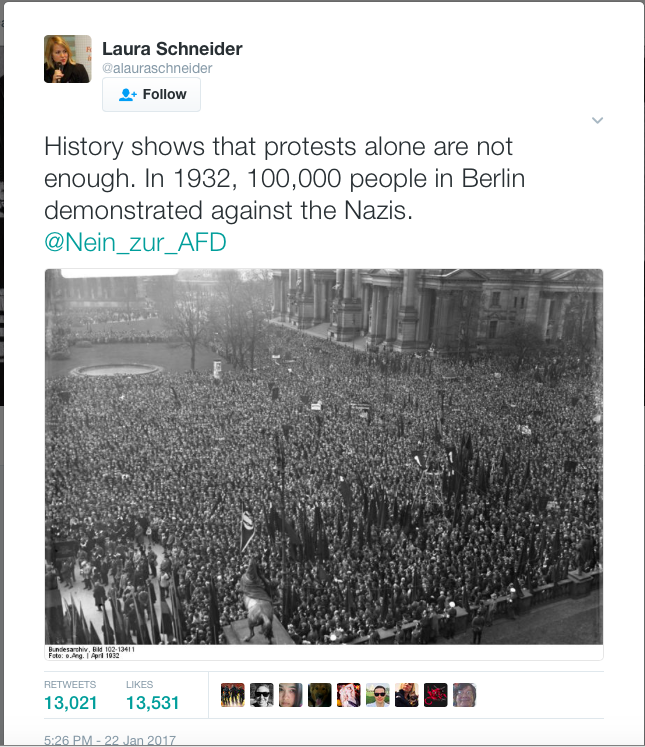 This was proven once again at the end of the new president’s first week in office when he signed an executive order temporarily banning refugees from entering the United States. While the administration insists that the order is not a Muslim Ban, it is noticeable that the seven countries affected by the ban all have a majority Muslim population.

We were told to ‘take Trump seriously, but not literally’, but that hasn’t made his actions since his inauguration any less terrifying. If anything, it makes it worse. Trump’s first week has confirmed our worst fears about how his administration would jeopardise the lives of women, minorities and refugees — and not just those in the US, but worldwide.

It’s important to remember that what Trump does in the US does not occur in an American bubble, but in a worldwide context. That’s right, Prime Minister – it’s not just the United States which are responsible for the United States’ policies. Any policy which has an international impact must be addressed by the international community. And policies as dangerous as Trump’s must be internationally condemned – not just by those in power, but by the people, too. Not least as we find ourselves being steered towards a more and more gruesome post-Brexit alignment with Trump’s USA across a range of policy areas, from borders to economics what with CETA being green-lit.

Powerless as we may feel against combatting this rise in fascism (call a fascist a fucking fascist), we can and must take effective action — not just in the form of marches.

Here are a few things you can do and organisations you can support to alleviate that feeling of hopelessness and — more importantly — help those most at risk.

In and around UCL and London

Amnesty International is a worldwide movement of people who campaign for internationally recognized human rights independently of any political party or religion. The UCL Amnesty society works to raise funds in support of amnesty campaigns and also to raise awareness of human rights violations occurring throughout the world.

UCLU GenFem have had an awesome rebirth this year. Most recently, they’ve held a placard-making session in honour of Marge Simpson and supported protests against Trump in and around campus, and are running a childcare campaign. Get involved!

The UCL Refugee Support Group launched last October in the wake of the demolition of the Calais ‘Jungle’. This group brings UCL students together to coordinate actions to support refugees and asylum seekers in the UK and abroad through campaigning, volunteering, fundraising and raising awareness.

The Women’s Network is the women’s liberation campaign at UCL. It is a safe space for all self-defining women and non-binary students to discuss issues around gender, and how it intersects with sexuality, race and disability. Current campaigns include Zero Tolerance Against Sexual Harassment and a collaboration with the UCLU Heads Up campaign which aims to raise awareness of and destigmatise mental illness.
Join the Facebook group (if you self-define as a woman or non-binary) or like the Facebook page (for all UCL folk regardless of whether they identify as women) to stay up to date with upcoming events and campaigns.

We also publish our own zine, Genderal Studies. Pertinently, the theme of the last issue was Action. Check it out on Tumblr for some activist inspiration.

Inspirational in their direct action against cuts to domestic violence services, Sisters Uncut have made headlines blocking bridges and hijacking London tube ads. UCL students might find the North London group easiest to support, but you’re sure to find a group near you.

The Fawcett Society is the UK’s leading gender equality charity. In their 150-year history, they’ve campaigned against the Gender Pay Gap, women’s underrepresentation in political roles and much, much more. Most recently, they launched a review of the UK’s Sex Discrimination Laws, amidst fears that women’s hard-won rights will be lost post-Brexit. Membership is as little as £1.50 per month for students, and they always welcome volunteers to help out in their small (but very busy!) London office.

Of course, there are so many more things that you can do to support refugees and women. For some more excellent organisations you can support and ways you can take action, check out this article from Platform London.

In and around London there are also many other really, really important organisations that are worth your support and who make a difference around the world: Black Lives Matter UK, Help Refugees, Hope Not Hate, and Stand Up To Racism, among others!

Don’t be neutral in situations of injustice

At a recent Women’s Network panel discussion, panelists spoke about the effect of gendered and racial harassment on one’s mental health. Something that we kept coming back to in this discussion was the idea of being seen as inhuman. A big problem with the British stiff upper lip is that we are all too used to keeping shtum in an awkward situation — but in the current climate, this just doesn’t work. If you see a Muslim woman being verbally abused on the Tube, or a trans person getting a sandwich thrown at them in the street — approach them. Talk to them. Ask if they are okay. Make small talk. You don’t have to put yourself at risk by calling out the abuser, but you must recognise the humanity of the person being abused.

Small charities and campaign groups often benefit most from volunteers coming into the office to carry out tasks for which they just don’t have the money to pay the staff. You might just be entering names of supporters into a database, or calling people to ask if they will be at the next demonstration, but these little things can make a huge difference.

*Full disclosure: I’m the Publicity Officer for UCLU Women’s Network and work at the Fawcett Society, so please forgive the shameless plugging.