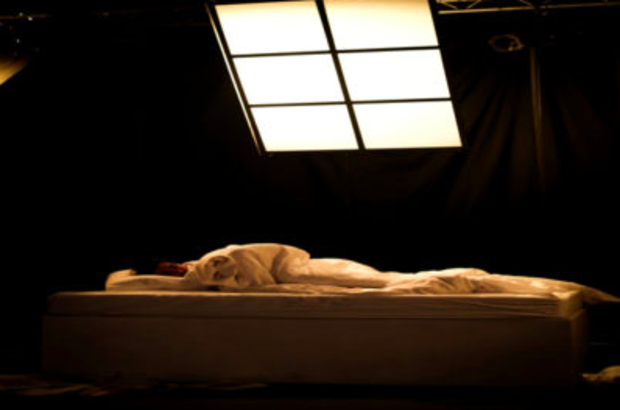 TOMMY WALTERS introduces the play Happy Yet? which tackles the stigma and humiliation of being labelled mentally ill.

Following a sell-out run at Edinburgh’s 2016 Fringe, Happy Yet? moves to London’s Courtyard Theatre for five shows between October 24th and  28th.

The dark comedy, written by Katie Berglöf and directed by Imy Wyatt Corner, is set in Stockholm where a family deals with the complex effects of depression and anxiety.

Happy Yet? is the story of the Sandqvist family and their struggle to understand Torsten and his disordered moods and dysfunction. From an attic flat in Stockholm, Torsten wages battle not only with his brother and his sister-in-law – but with his own mercurial mind. As a permanent guest in his brother’s home, Torsten is constantly reminded of his inadequacy and inability to live up to conventions of Swedish society.

A fresh voice to theatre, 22-year-old Swedish playwright Katie Berglöf wrote her first play Happy Yet? from personal experience. Berglöf grew up watching a close family member endure years of depression, mood swings and misunderstanding. The play uses humour to turn tragedy into a source of understanding, dignity and hope.

The play has been described by The List as ‘…an important addition to the discussion about mental health and an education to those weary of the subject. A striking, beautiful and heartbreaking production.’

Happy Yet? will perform at London’s Courtyard Theatre Oct 24-28. Tickets can be found here.