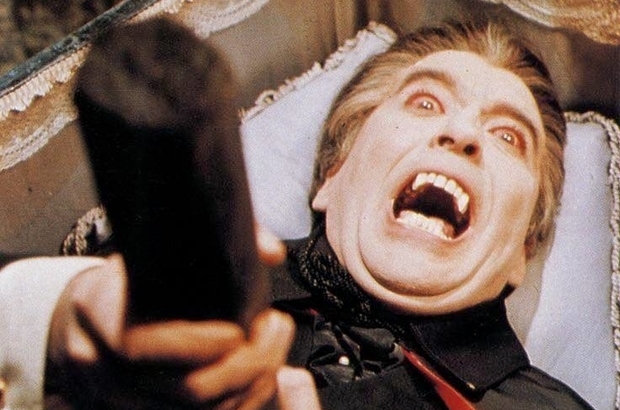 Through the topos of an after-dark tour of the historic Sutton House, with (for the purposes of full disclosure) a generous supply of complimentary Prosecco provided before the show proper, the audience slides seamlessly into the story of Dracula, ingeniously blurring the real and the theatrical. Tea Break Theatre cunningly integrates this site-specific piece of promenade not only into the house itself, but the mechanics of the setup as an historical attraction, where audience and actors move in and out of each other’s space fluidly. Writer-director Katharine Armitage perspicaciously updates Bram Stoker’s 1897 horror behemoth to the modern day – Lucy Westenra and Sir Arthur Holmwood (Jennifer Tyler and Jeff Scott respectively) become plummy Ascot types, Van Helsing (Jon-Paul Rowden) is an internet conspiracy theorist. There’s also something deliciously tongue-in-cheek about how Dracula’s insane acolyte Renfield (with a fantastically creepy performance by Louise Wilcox) is translated as a tour guide in the employ of the National Trust – a looming force that fittingly pervades stately property and sucks its victims dry through eyebrow-raising admission prices and car-park tariffs.

In the programme the production sets out its stall – ‘this story is really all about one thing: repression’ – a theme adroitly explored through Angela Nesi’s performance as Dr Seward, who in the updated setting becomes a modern therapist/psychiatrist. Her assessment of Lucy’s vampiric behaviour? ‘She’s depressed!’ It is in this way the play traces a bloodline from the (often problematic) medicalisation of various behaviours at the fin de siècle to today’s overtures into an open and lucrative conversation concerning mental health. In drawing this parallel in relation to a re-examination of Dracula, the play interestingly draws attention to the prevalence of vampire imagery even in recent cultural cognizance of mental health, with the figures of the goth or the emo, for example.

Armitage also explores how the vampires feed on repressed feelings through her engineering of a homosexual attraction between Seward (changed from the male version in Stoker’s novel) and Lucy – which necessitates the production’s return to the original homophobic Victorian setting of the source material. Engaging with Sutton House’s LGBTQ season (we are, after all, in Hackney), this queering of the vampire paradigm serves only to restore the story to its original context – Bram Stoker’s coming to terms with his homosexuality and his infatuation with famed actor-manager Henry Irving. Fittingly, the play largely takes place in the same rooms as an exhibition of queer nightlife – scenes of gothic horror unfolding in front of photo portraits of drag artist Victoria Sin. It is in this way the production delves into another stratum of the mythology of Dracula – the vampire as queer symbol, a figure of forbidden erotic exploration, the fanged mouth as a locus of both penetrative and receptive sexual possibility, unconfined to a specific gender identity. Ideas of vampirism are intertwined with the idea of the gay man in particular, from his watershed emergence as a sartorial but predatory Dracula-esque menace in the 1890s – Stoker would have been writing his novel at exactly the same time as the rise and fall of Oscar Wilde – to parallels with the blood-curse of AIDS just under a century later. In a grounded and understated confrontation between Molly Small’s Mina Harker and Christopher Dobson as Jonathan, Armitage seems to suggest that Mina identifies a latent homosexuality in her husband that has been awakened by an encounter with Dracula.

The eponymous Count’s presence is felt throughout, despite his never physically appearing – an ingenious decision which makes the experience more psychological and steers the evening away from Carry On Screaming territory. Having said this, the production does at points succumb to the seductive campness integral to the enduring celebration of Dracula. There is, for example, the flourish of a ‘disclaimer form’ distributed at the beginning, where the participant is asked to specify suggestive categories such as ‘marital status’ and ‘blood group’ – but that is not to say these touches are unwelcome. Despite the deft modernisation of the Stoker novel, many would come away disappointed from an incarnation of Dracula totally defrocked of its Hammer Horror heritage. One yearns for at least a glimpse of cravat or flicker of candle, and on this front the production thankfully does not disappoint, delivering plenty of frills as well as thrills. But before the parade of Victoriana has the chance to wear thin, the production takes another hairpin turn and veers off in another unexpected and exciting direction with many tricks – as well as treats – in its repertoire. That said, the show’s publicity teases ‘the story you thought you knew, stripped bare’, but at points the plot itself becomes somewhat lost between rooms as the audience is shepherded around, or when the production is overcome by some of its own spooky theatrics. Without wishing to give too much away, there is a gloriously high-gothic interlude involving hoods and chanting which is tremendous fun, and genuinely unsettling, if superfluous to the development of the plot.

Although the show touches on contexts of queerness and mental health in the Dracula myth, this never feels like box-ticking or trying to be too flavour-of-the-moment. The production happily indulges both a nuanced re-reading of the original story as well as an appetite for caped cliché, managing to strike a balance between silly and serious and creating theatre that is fun as well as thoughtful.