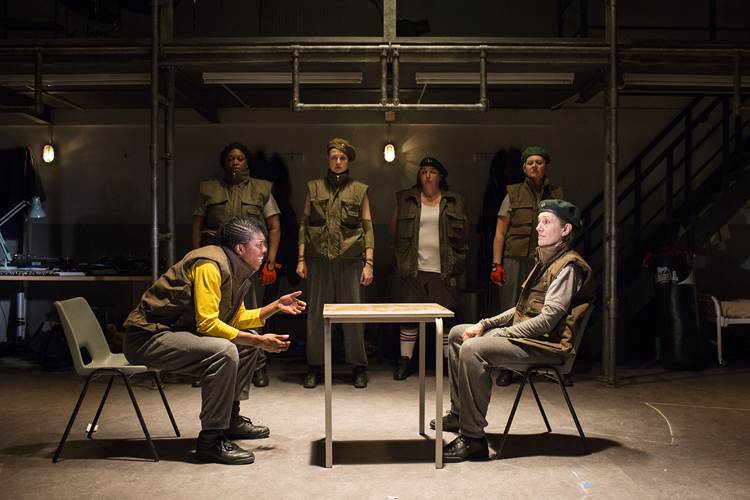 Henry IV is the second of Phyllida Lloyd’s all-female productions of Shakespeare’s plays at the Donmar. On entering the theatre – via the emergency exit – you are thrust into a prison setting. Even the ushers are dressed in police uniforms.

The play opens with the prisoners lining up and the audience’s first encounter with Prince Hal (Clare Dunne), who is celebrating her imminent release. It is a moment that resonates strongly later, as the character of Hal must leave his old friends behind and assume the role of king; both Prince Hal and prisoner will be forced to shed their previous selves and abandon their old friends. The difficulty of this decision is something that is brought into stark relief by Lloyd’s additional ending.

Since the cast is only comprised of females and the personal pronouns within the text remain unchanged, there are some amusing moments as Falstaff (Ashley McGuire) and Hotspur (Jade Anouka) decry the follies of women. The actors, keeping their native accents, demonstrate an impressive command of the language, making it feel natural and part of the now. Dubliner Clare Dunne makes light work of Hal’s lengthy speeches, being both wilfully laconic and blisteringly intense. The removal of the language from its usual RP delivery enables the women to reclaim the text, revealing the underlying question that Lloyd’s production is asking the audience: who actually owns Shakespeare?

While McGuire has been widely praised for her hilarious turn as Falstaff, Jane Anouka and Sharon Rooney also shine brightly. Anouka’s reimagined Hotspur is full of vitality, perfectly embodying the character’s rash youthfulness without shying away from his more vulnerable moments. As an emotive Kate, Rooney marks an impressive stage debut with an utterly convincing portrayal of heart-rending grief.

However, Lloyd’s other touches vary in their effectiveness. The frequent use of music throughout the production, seamlessly interweaves the two periods of language together; firmly rooting this Shakespeare production in the present day. Natural and effortless moments, such as Falstaff’s rendition of Pulp’s Common People, work well, yet there are instances which feel overtly staged and jar with the text of the play.

Although this condensed two hour version of the two Henry IV plays, there are some moments that lose their impact, because they feel rushed and lack the breathing space of a full-length production. Consequently, some of the subtleties in character are necessarily lost, and motivations left unclear to those unfamiliar with the plays or the history of that period.

Whether to good or to ill, we are never allowed to forget where the play is set. As some of the prisoners don police helmets in the final scene, the intrusion of reality and the outside world comes to the fore, drawing the play to a self-conscious close. As McGuire is pulled offstage by the prison guards, we are given a final reminder of the universal strength of emotion Shakespeare’s plays engender and embody.

Who owns Shakespeare? We all do.