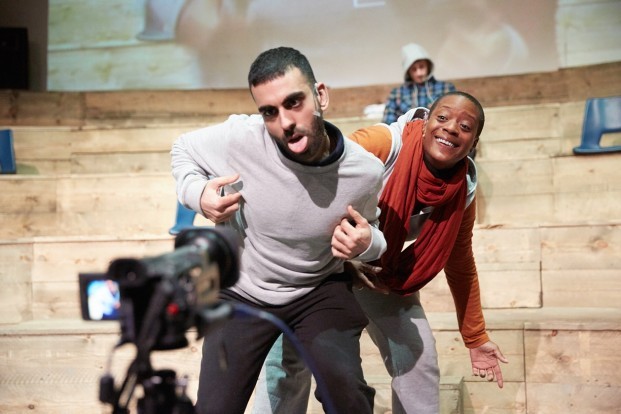 SUSANNAH BAIN reviews Re: Home at The Yard Theatre in Hackney Wick.

Re: Home at The Yard Theatre begins with a short piece of video footage. It explains what verbatim theatre is, and that in this case the words come from the residents of the Beaumont Road Estate in East London. The play is a follow-up from Home, which was built around interviews conducted by Offstage Theatre Productions in the same area in 2005, just before two tower blocks – St Catherine’s and St Paul’s – were demolished.

Georgia Lowe’s clever set design fuses with the space of The Yard itself to create the run-down and neglected atmosphere of the estate. Everything is wooden, seemingly temporary and decrepit. There is a sense of tragedy and impermanence, as the juvenile graffiti comes to represent the boys at their early age in 2005, while we are given access to their less innocent behaviour ten years later. The set is used well too, with the actors clambering over it to show distinctions between characters. The actors don’t just play young boys, but elderly people, mothers, fathers, and teenagers, as well as themselves.

Performances are strong from all four of the actors. Having to play an array of different interviewees, they display high levels of versatility. This is particularly the case with Hasan Dixon, whose portrayal of two characters, Brenda and Nancy, provides comic relief, moments before his Darren reveals a tragedy. His style is extremely understated: he suggests a wholly different character with a few small changes. This less-is-more approach is taken by all the actors, and serves a piece that relies on the real words of real people. Part of what makes Re: Home a great piece of theatre is this honesty.

What brought Re: Home home for me (pun intended), is the sheer mastery with which the story unfolds, how the interviews are edited and arranged. Things start loosely as the audience are familiarised with the story and its characters. However, as the play proceeds, more personal stories are uncovered, tales infused with a subtle humour that creates a very personal discussion. Such an experience – one of captivation and heartbreak – is surprising in a play about such large scale events, ones that we know of and which most of us feel at a distance from. Nonetheless, this emotion is necessary in explaining and evoking the experiences of those from the Beaumont Road Estate.

The play ends on a sad note. A character that previously has seemed insignificant, there largely to provide evidence of the truth of the interview process, becomes prominent and suddenly very important. It’s a twist you don’t expect, even if, in hindsight, there have been hints at the occurrence all along. Such a statement leaves us wondering about how easy it is for us to disregard and overlook. The Beaumont Road Estate was largely demolished a decade ago: its population becoming a diaspora in other parts of London, in the suburbs, and in the countryside. While the estate may not see as much crime today, residents feel they have lost their community. Most of us probably saw something on the news about the towers falling, but very few of us took a moment to contemplate the lives of those who lived in them