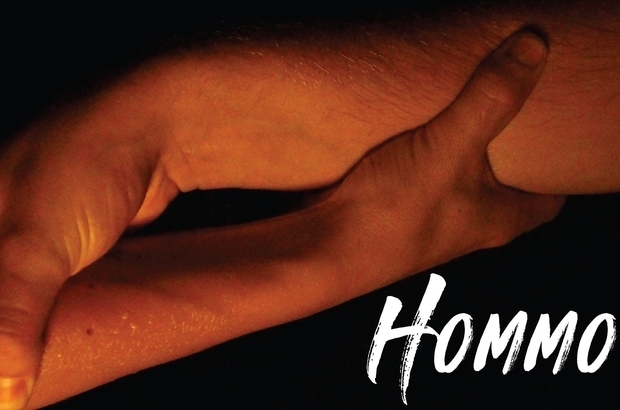 DANIEL LUBIN reviews Hommo at the Lion and Unicorn Theatre.

Multi-coloured toy guns and condoms; an erect punching-bag arranged between two boxing gloves; bullets and a toy ball. This garish array, glowing shrine-like at the back of the stage. presents a range of images mingling sex with violence, tinted with a comic innocence that perfectly captures the tone of Hommo. Posing physical against verbal expression in an exploration of masculinity and sexuality, Thomas Froy’s piece of new writing is riddled with innuendo, balancing comedy with a deliberately prevalent and absurdist awkwardness – but at points it gets lost in its own ambiguity.

The narrative follows two men (played by Erik Alstad and Sam Ebner-Landy) as they discuss the killing and seduction of two women. Murder and dating are ambiguously aligned by sexualised descriptions of violence towards one woman, and violent descriptions of sex towards the other. Loud expressions of heterosexual masculinity are shown ultimately to be hollow facades – any boast is undermined by an inability to deliver, leaving the characters in a state of stifling discomfort. Ebner-Landy’s character crudely interrogates the other about his sex life, enacting ‘locker-room banter’ with a smirk only to reveal moments later that he doesn’t enjoy sex himself. Similarly, he later insists on giving the other character advice as to how to conduct the murder, but suddenly can’t express himself and descends into a panicky waffle. Alstad also smugly asserts his immense ‘experience’ in murdering women but then recedes into cagey discomfort, and is taken aback by the sudden appearance of the gun. Language, in these moments, fails the characters, where earlier it is used as a tool to confidently assert themselves.

But these explicit expressions of masculinity only thinly veil an underlying homoerotic tension tightly woven into the crude innuendos that pervade the dialogue. When the toy gun is placed on the floor, both characters are disturbed by its intrusion, and its phallic implications emerge in their awkwardness as they describe it as ‘big’, ‘heavy’, and ‘solid’. The transparency of their language is inevitably funny, but the play draws a serious contrast between the showy expressions of heterosexuality the men make and the homosexual desire that permeates the play, ever-present but only in metaphor and implication.

This tension in the characters grappling with verbal expressions of sexuality dissipates in the later dance/dream sequences. In the first of these, the actors strut around the edge of the set at a distinct distance, but as the routines indulge further in their homoeroticism, the staging captures a looser feel than the rigidly staged early scenes. A mimed gym routine is followed by an intensely sensual massage, and finally a Bond-esque spy role-play in which Alstad urgently pivots with his pistol held out. In these scenes the physical intimacy of the characters overrides the prevailing awkwardness. Through physical theatre, mime and dance set to music, homosexual desire is allowed to be openly and comfortably expressed in a way it wasn’t before in language. After the sequence, the two lie against a wall exhausted and utterly relaxed. The script slyly blurs their conversation, so it is unclear as to whether it is the murder of the women or their own sexual consummation that has just been enacted. What is innuendo and what is reality is initially ambiguous.

But this conflation of homosexual discovery and femicide is potentially problematic. The three threads of homosexual desire, heterosexual masculinity and the play’s treatment of women are tightly intertwined, but it would seem the last is really used only to bind together the first two. The woman is present merely as a symbol, to be the object of misogyny, and to be killed as a metaphor for homosexual awakening. Whilst the woman’s role as pure symbol pacifies the conflation of femicide and homosexuality – were she a developed character it would be crueller – it also leaves her wholly objectified. The play seems to confuse its attitude towards women, since as we are obviously meant to scorn the men’s crude sexism and objectification, the sexual empowerment at the end we are lead to support is inextricably tied to an act of flippantly violent misogyny.

Hommo does show the damaging effects of toxic masculinity, both in its inherent misogyny and in its effects on the male characters, bringing them obvious discomfort, and stunting their true expression of gender and sexuality. It shows that our society’s model of masculinity can be difficult to navigate and restricts individual expression. Any message past this gets lost in the play’s metaphors and absurdities, and the message that is conveyed is ultimately not substantial or nuanced enough to carry the play, despite the undeniable importance of the discourse raised.