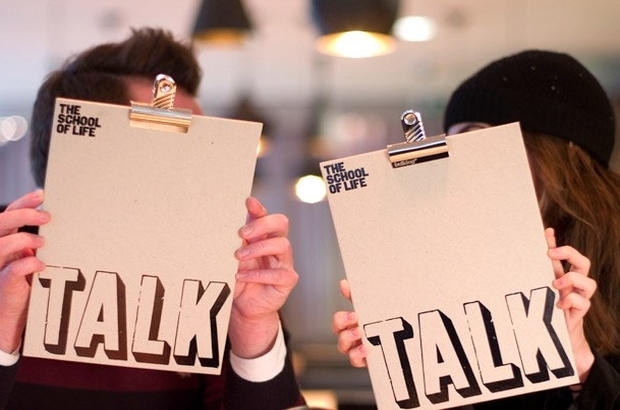 “Unencumber yourselves”, a woman proclaims on stage as the event starts. I’m wondering what I am unencumbering myself from – the patriarchy? The class divide? The fact that I’m an ethnic minority? Welcome to The School of Life.

The idea of a secular ‘Sunday Sermon’ is one that subverts religious terminology, and speaks volumes about the role The School of Life wants to play in our lives. The Church was once the cornerstone of culture and society in the United Kingdom, helping individuals reflect on their morality, giving them step by step guidelines on how to live a fulfilling life, and most importantly fostering a community of like-minded individuals who encouraged one another in their lifestyle. Fast-forward to today, The School of Life has recognised the void in our lives that was once filled by religious institutions and attempts to present their own secular alternative. One of the ways they do this is through their ‘Sunday Sermons’. However, rest assured, ‘you will never be cornered by dogma’: they are piously devoted to the principle of open-mindedness.

I attended a ‘sermon’ delivered by Shami Chakrabarti, the barrister and Shadow Attorney General, who was previously director of human rights advocacy group Liberty. Chakrabarti was to give a speech about feminism, primarily focusing on what she covers in her new book, Of Women: In the 21st Century.

I took my seat in a hall occupied by women, a sight I had not beheld since my days in an all-girls convent school. The event started with a hymn, an energised exercise whereby the entire room immodestly engaged in vocal exercises together before we sang. The hymns were to the tune of pop songs, with lyrics hijacked to encompass feminist ideology. Together we sang, “Sisters are doin’ it for themselves tap tap”. The woman on stage was throwing her fists in the air, her enthusiasm reverberating through the room. It was bizarre, almost cult-like; I had never witnessed such a united female presence before, and, as I sang along, blood surged through my veins and I (surprisingly) felt delightfully empowered.

It certainly felt like an ‘extreme feminist event’, but Chakrabarti’s stance was less aggressive and more nuanced; her sermon was considered and insightful. Focusing on the theme of sisterhood, she began with an eloquent speech about how she once thought equal rights were a tangible possibly, yet her generation grew up only to betray each other. She then went on to make the bold statement that, ‘Gender injustice is the greatest human right abuse.’ In a meticulous manner, the lawyer in Shami Chakrabarti proved her point through a rigorous run through of statistics, concluding that equal rights would achieve the collateral benefits of peace, stability, and general happiness.

One of her most insightful points was regarding how she strongly advocated for affirmative action for both women and men, a stance she did not originally hold as a young woman. Affirmative action for men should exist in occupations like primary school teaching, where a male influence is very much lacking. She argued that the reason affirmative action is required is because the planet today is far from being meritocratic. Even if women who achieve notable positions through affirmative action are disrespected, Chakrabarti contends that they would have been disrespected anyway — so one can at least level the playing field. It is a persuasive argument in a world where women have become accustomed to a tough uphill battle, and feel almost undeserving of equality, as if it has been given rather than earned.

The sermon concluded with another hymn. When practising the line, “What’s going on”, the woman on stage implored us to think about who we would aim this line at. The hymn felt like something of a battle cry for fighting oppression in the world today.

The School of Life’s Sunday Sermon was indeed a refreshing experience. I am, however, more sceptical of their overall claim that they will “direct you toward a variety of ideas from the humanities”. A variety of ideas are certainly presented within the programme as a whole — but at least within this event, they seemed to cater to a fairly liberal, privileged standpoint. “Political correctness gone mad” – a phrase that Chakrabarti mentioned sarcastically in her speech — was received with knowing laughs and cheers in the audience; she was clearly amongst her ilk. Like the religious institutions The School of Life emulates, there is clearly a certain moral agenda behind its Sunday Sermons, incorporating what is an important, but perhaps qualified, form of open-mindedness.

The School of Life’s next event – Heroes: Oliver Jeffers meets Brian Cox – will take place this Friday 24th November at Logan Hall. Click here for tickets, and use the discount code PHYSICSFICTION50 for 50% off the original price.

Featured image courtesy of The School of Life.