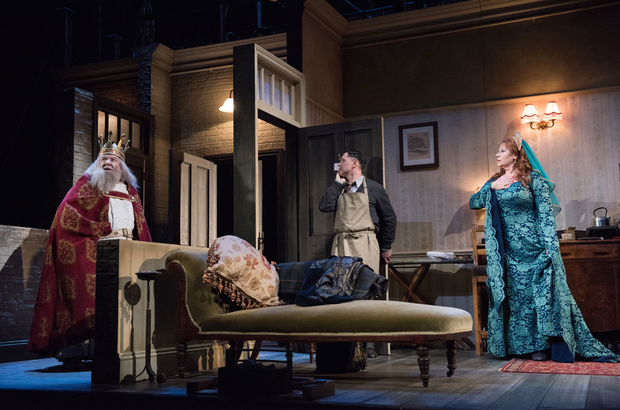 AMY MACPHERSON reviews ‘The Dresser’ at The Duke of York Theatre

I once had the displeasure of visiting an extremely rundown theatre in East London. It had peeling wall-paper, flickering lightbulbs, and cracked mirrors that loomed drearily over the dressing tables. The air was thick with the smell of rotten costumes. The carpet was grey. The set of ‘The Dresser’ replicates the atmosphere of that theatre’s dressing-room almost exactly.

The play has been described by critics as Ronald Harwood’s love-letter to the theatre. Judging by the events of the production, the love-letter is bitter-sweet: expressing the drama of backstage and the pain of performance. Indeed, I left the theatre wondering if the life of an actor was all it was cracked up to be. ‘The Dresser’ is not an attractive portrayal of behind-the-scenes antics.

The play begins with a bang–literally. A bomb drops from the sky. It is World War II and a production of ‘King Lear’ is about to take place. Reece Shearsmith plays the eponymous dresser, whose task it is to ensure that the ailing, egomaniacal lead actor, known only as ‘Sir’ (Ken Stott) arrives on stage in time. This is easier said than done. Sir’s memory is a little foggy and he’s feeling–shall we say?–lachrymose. What ensues is a high-tension tragicomedy, where the audience is never quite sure whether to laugh or cry.

This is partly because Sir appears to have dementia, which makes laughing at the character feel at times like the laughter of Victorian visitors to the lunatic asylums. His slow deterioration is one of the more tragic elements of the play, though Ken Stott’s performance makes the odd chuckle irresistible. The abrupt changes in the character’s mood are palpably evoked by the small, upward crease of his lips or the distracted furrowing of his brow. The stage atmosphere shifts with his demeanour: darkening when his depression surfaces, and brightening as the spark of forgotten vigour re-enters his eyes.

Reece Shearsmith, the effeminate and long-suffering Norman, is the perfect counterpart to the ailing Sir. Stott may steal the show in the first act, but Shearsmith matches him in the second with his intense portrayal of decline and heartache. He plays the character with a nervous energy that can at times be humorous and other times utterly unnerving. He is cunning, manipulative and sometimes downright cruel. Long silences stretch out between him and Stott, causing any previous levity to fall down dead and the malaise of infirmity to sink back in.

Unsurprisingly for a play called ‘The Dresser’, there is a lot of dressing and undressing. The first act almost entirely involves Sir applying make-up, dressing up and fitting on a wig. The various processes are laborious and time-consuming, and they are made more so by the aging actor’s reluctance to perform them. Nonetheless, Sir does complete them. Spurred on by the unctuous flattery of Norman and–bizarrely–the thought of Nazis raining hell from the skies, he makes it to the stage and delivers his King Lear performance. Theatre is a labour of love. It is a soul-crushing and repetitive, yet defiant act.

The play is mainly centred around its two lead actors, but the supporting cast also deliver strong performances, especially Harriet Thorpe, who plays ‘Her Ladyship’. Selina Cadell’s appearances may be fleeting, but she nonetheless delivers them well.

A precise balance between tragic and comic is deftly achieved by director Simon Foley, though many aspects of the play are incredibly bleak. A few more moments of levity might have made the whole tragedy a little easier to bear.

‘The Dresser’ is showing at The Duke of York Theatre until 14th Oct. For tickets and more information click here: https://www.londontheatre.co.uk/show/the-dresser