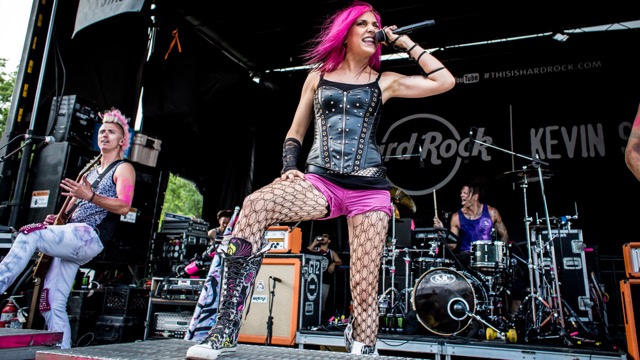 JAMES PATRICK CASEY sees Icon For Hire at the Islington Academy, an awesome, energetic band with a reluctant, incongruous fanbase.

With my insulin pump bandaged to my arm and my sprained wrist wrapped up in padding, I went to see pop-punk band Icon For Hire who are, completely incidentally, the third consecutive band I’ve seen this year to come from Chicago. And while both the headliners and opening five-piece Dead! were brutally energetic and engaged with the crowd, the crowd themselves were the weird mixture of punks and chilled pop fans, all crammed into an insultingly small venue considering the quality of the acts, that left the three-hour performances continually on the verge of boiling into a full-scale moshpit, but never reaching that point.

Icon For Hire aren’t a hardcore band, with their second album, Icon For Hire, being much more synth-heavy and melodic than their first, more angsty full-length piece, Scripted, and I feared this difference would make it hard for the band to have a defined on-stage persona. Fortunately, everything from drums to keyboards were overdriven, singer Ariel appeared all in black, ditching her once-bright pink hair giving the whole evening an edgy, abrasive performance, not like an anti-establishment punk group does, but more like being sworn at by a Tim Burton character.

The ‘slower’ songs from Icon For Hire were also morphed into surprise rap songs, with ‘Nerves’ and ‘Sugar and Spice’ being met with bobbing hip-hop hands from the crowd, adding a new dimension to a gig that threatened to become a predictable, although enjoyable, rock show after the introduction of Dead!, a talented young band who are basically My Chemical Romance circa 2004, complete with floppy-haired singer and a second guitarist who looks like he’s there because he’s the lonely mate of the singer or something.

The lack of moshing was a shame because both bands were great performers, with Dead! joking about drinking from beer bottles angrily lobbed by spectators and their guitarist’s sore throat, and Icon For Hire firing insults and questions at each other between songs – “Are you playing softer than usual?”. Both groups also manned their own merchandise tables at the end of the show, and I got a signed t-shirt and the knowledge that Icon guitarist Shawn doesn’t sleep with his hair in a mohawk, but uses conditioner to flatten it before bed, so we felt like friends seeing our annoyingly talented mates play at a venue, rather than having the usual fan-artist divide. And while some of Ariel’s anti-mainstream speeches felt a bit forced and aimed at the angsty fifteen year-old we’ve all moved on from, there was a closeness and genuineness to the entire evening that I feel we, as a crowd, squandered somewhat – I believe Icon For Hire when they said “we weren’t meant to throw ourselves away, for one meagre shot at fame”.