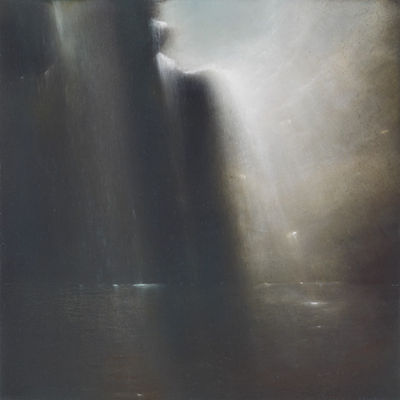 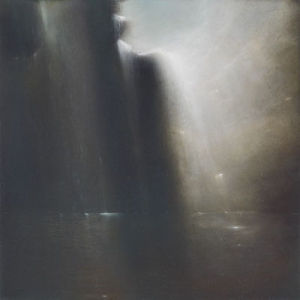 Last month I attended the opening for Richard Whadcock’s solo exhibition at the Northcote Gallery, Chelsea. The space is almost entirely dedicated to Whadcock’s recent work and is open until next weekend. Whadcock is an artist based in Brighton who travels around the British Isles to find inspiration for his large-scale land and seascape oil paintings. This exhibition features a collection of his paintings from his residence in Cill Rialiag, Ireland and reveals Whadcock’s fascination with coastline.

What first strikes me about Whadcock’s paintings is how they are wholly contemporary, yet at the same time recall the Romantic landscapes of JMW Turner and Caspar David Friedrich. Whadcock’s work manages to appear both abstract and photographic and these seemingly conflicting qualities allow for an elegant and ethereal interpretation of the British landscape.

Whadcock works on both large scale (up to 100x130cm) and smaller scale canvases. In both he is equally successful in capturing a strong sense of movement and light. However, it is when we view the larger canvases that we have the most immersive experience. Whadcock’s paintings draw you in with their depth and light, and recreate the feeling of walking along an Irish coastline or Dorset field. 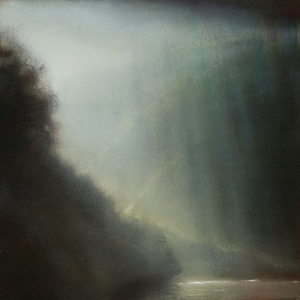 Whadcock has an unusual artistic process: in order to create the glassy effect of his paintings he alternately layers oil and glaze. In this way his landscapes are able to evolve naturally as they are composed of a slow build-up of layers, allowing Whadcock to deviate from his photographic sources. Because they are infused with many layers of glaze, his paintings are remarkably amorphous and luminous. The sense of movement in the paintings may also be attributed to this lacquering effect as the artistic process mimics nature’s subtle, shifting momentum. Each layer must dry before the next is applied and so multiple canvases are worked on at one time, giving the collection a noticeable coherence.

From a distance, the paintings almost appear monochromatic, seemingly composed of steely greys or burnt umbers. However, on closer inspection you can see an unexpected range of colours. In the murky blues you find surprising tinges of pinks and orange, the base colours of his canvases, seeping through. In this way, while the subject matter may often be bleak, the overall impression can become one of rich opulence. Furthermore, during the different times of day, the atmosphere of the paintings also shifts. The light and spacious Northcote Gallery facilitates this quality in the paintings.

Ruskin once noted Turner’s ‘exquisite sense of colour,’ particularly in his treatment of white. He notes how white ‘ought to be strangely delicious – tender as well as bright, like inlaid mother of pearl.’ He claims this can be achieved ‘by absolutely refusing to allow any white to exist except where you need it.’ Whadcock seems to share this ability to control the brightness of his whites so that he is able to capture the frozen light of sunlight cracking through clouds and hitting water thus attaining the opaline whiteness that Ruskin values so highly.

His subject matter ranges from towering craggy cliffs and gullies to a few stumped trees in fog, yet they all make for mysterious and enthralling scenes. Indeed, it is often the most innocuous of landscapes that are the most curious. In this way Whadcock’s paintings have a poetic beauty that render a deeper understanding of the British landscape. It is hard now, to look at a bleak winter’s landscape or seascape and not have Whadcock’s paintings in mind.