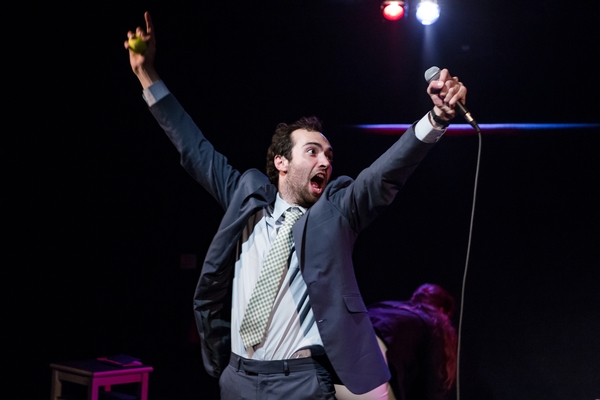 COLETTE ALLEN reviews If I Were Me at Soho Theatre.

The audience seated in the informal Upstairs at Soho Theatre are introduced to Philip (Nasi Voutsas) as he makes several attempts to record a message for his answerphone. Philip works in advertising, not exactly an obvious career choice for an awkward, bumbling man who is always seen carrying a dying plant. In the process of trying to sell ‘MugShot’, a new instant noodle snack, Philip also learns to sell himself, as this quirky and eccentric satire exposes the pitiful reality of corporate consumerism.

Around the time the audience is required to throw tennis balls at Philip from our seats, our protagonist’s pathetic nature goes from funny to depressing. The breakdown which follows as he ‘allows’ office bully Hannah (Daniela Pasquini) to make a fool out of him is heart-retching. Philip strips off his suit onstage and parades around in his boxers, lost and lacking identity. At this point the play becomes surreal. Person (Merce Ribot), an admirer of Philip who has lost all identity herself, emerges from the audience to take on Philip’s character (I told you it was quirky, bear with me here). With Philip half-naked and Person in his discarded suit, for a moment the imposter does a better job ‘doing Philip’.

Yet somehow, watching Philip improve his lot is so much worse than his crisis. Inspiration to take back control of his life comes from the dynamic Trevor at the advertising company’s bustling conference. But Philip doesn’t walk away, as we hope he might; instead he puts his suit back on and learns to conform. The epiphany that appears to bring Philip happiness actually makes him a bit of a prick, turning on the friends he didn’t appreciate while he was ‘nobody’. Sure, his plant begins to blossom, but that just marks his movement into the corporate sphere.

The plot unravels alongside a poking commentary on the ridiculousness of Western, particularly American, advertising. Trevor’s ‘will to distinctify’ and over-the-top enthusiasm clearly mocks the paradox at the heart of corporate rhetoric, which promotes individuality while nurturing conformity. Watching Philip sell out threatens to be almost too depressing to watch, but his decline is made bearable when offset with a reflection on the ridiculousness of this world of consumerism. The full house’s raucous laughter, which provides a soundtrack to the story, goes to show that the play’s inferences are well received by the young audience, many of whom face the same challenges as Philip in beginning their own careers.

There is moment when Person, acting as Philip, mentions that her word of the month is ‘synonym’. She reflects that this word needs its own appreciation. Just because it is a word used to describe other words does not mean it should be ignored. This idea summarises the entire message I believe the play is trying to make; that we are so confused by the abundance of ‘stuff’ in materialistic twenty-first century society that we ourselves feel the need to be ‘flashy’ to receive attention. In thinking this, we undermine the more mundane roles as worthless. Yet such roles have a value of their own which we must learn to recognise. In the desperate scramble to be recognised in the corporate environment, climbers lose the identity that makes them, them.

Promising young company Antler beautifully capture the uncertainty surrounding this environment. They take a much-needed step-back to encourage a re-examination of the way we sell ourselves in the twenty-first century and If I Were Me is a touching a witty commentary on retaining identity in the commercial world.

‘If I Were Me’ was playing as part of the Soho Rising season, which focuses on providing a platform for new artistic talent in London. For more information visit http://sohotheatre.com/whats-on/season/soho-rising.