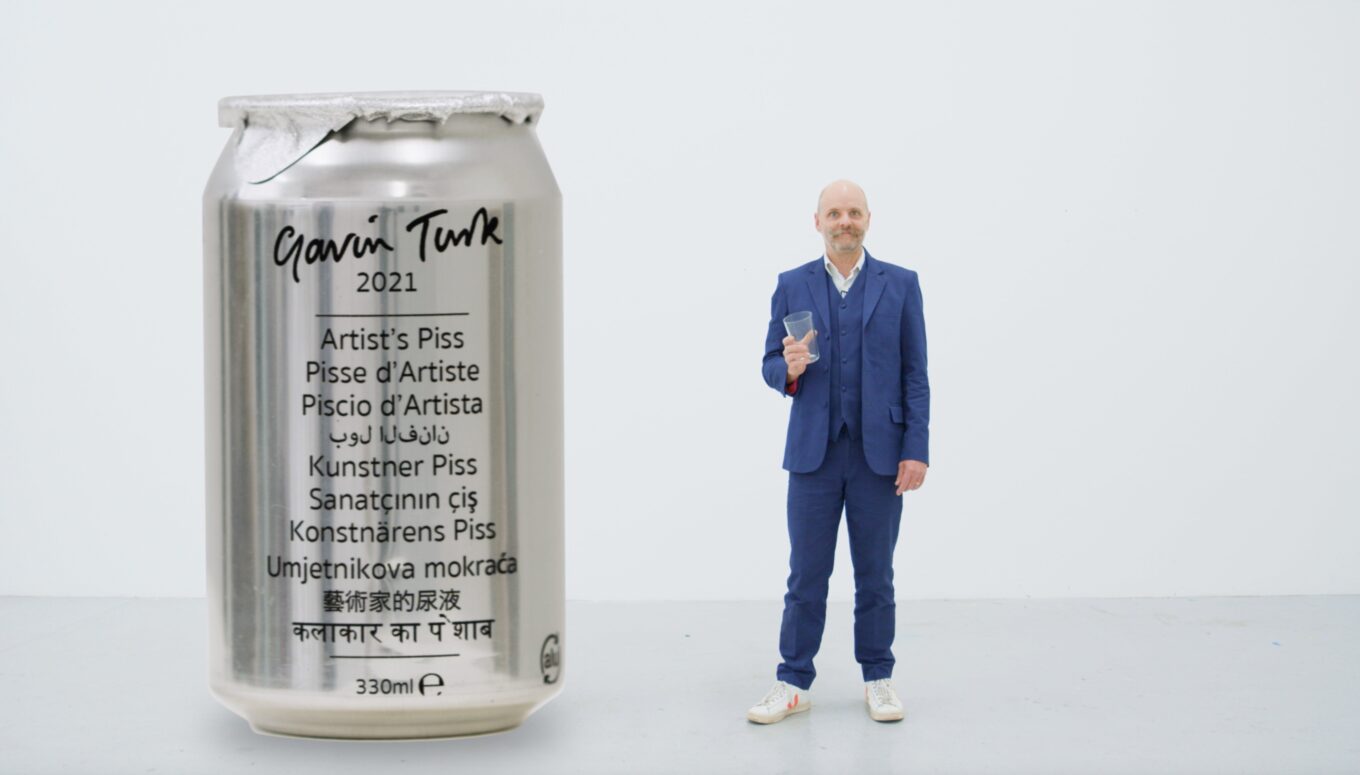 LAURIE MILTON-JEFFERIES and RUBY ANDERSON chat to British artist GAVIN TURK about Piscio d’Artista, a project in which Turk sells cans of his own urine for their equivalent weight in silver.

On 13 September 2021, Gavin Turk launched his Kickstarter campaign to support the production of his new body of work. Piscio d’Artista is an homage to Piero Manzoni’s 1961 Merda d’arise – but, instead of shit, it’s piss; instead of tins, its cans; instead of gold, it’s silver. Turk produced 1,000 bespoke aluminium cans of his urine, completed with specially screen printed exterior with text translated into thirty-one different languages, and finished with a hand signed foil seal. Exploring the way in which value is ascribed to contemporary art, Turk advocates how by supporting this endeavour, ‘you’re making art history come to life’. We chatted to him about the nuances behind the project, and how the work situates itself within the art historical canon.

Are you taking the piss? You say you’re “giving a piss”, but by selling urine in a tongue in cheek manner, aren’t you taking it, figuratively speaking? The satirical edge to the work is very intriguing.

This work plays up to the provocative game that art plays when it gets right up close to the picture plane, in fact somehow sneaking out of it. ‘This isn’t art!’, some people cry. They say art should be beautiful, thought provoking, progressive, communicative, the list goes on.

There is certainly a satirical edge to the work. However, the work is also a celebration, paying homage to art history. It celebrates the power of art to make pictures of our reality that can elucidate our conscious and unconscious being. The phrase ‘taking the piss’ makes me laugh, as why would anyone want to do that, and where are you taking it to? Early alchemists believed that by taking and processing this liquid with the golden hue they might be able to find actual gold.

Talk us through the logistics of the project. What kind of reactions did you get when telling people about the idea?

I’ve been thinking about this project for the past five years and started to bottle my urine (in found two litre plastic bottles) at the start of last year. In many ways, I see this project as a reflection of the pandemic lockdown. People are generally disgusted at first, then come round to the idea, seeing the way that the canning process (in Canning Town) mirrors the tinning process that Piero Manzoni used back in 1961. The issue/story of human waste is rapidly becoming the imperative topic of contemporary life.

Why recreate Manzoni now? Do you think that there is still something provocative about using bodily fluids in art?

Manzoni was a modernist. In 1961, one of the keys to art was originality; great importance was placed on whether this or that had been done before. Today, art is a reflexive subject where significance is derived from reference and alignment. Bodily fluids aren’t provocative in art today in the same way that they were in 1961. The human condition and cultural systems cannot stop the fact that, like breathing and eating, people are going to urinate and defecate.

Urine has been used historically in other artworks, and indeed in your own practice. How does your work sit in relation to this art historical tradition.

Back in 1917 a sculpture called Fountain was displayed at (and eventually removed from) The Society of Independent Artists Exhibition. The work, consisting of a ceramic urinal displayed on its back, was credited to Marcel Duchamp (who was on the hanging committee), signed by R.Mutt. Duchamp went on to outline his belief that art is context and concept before all else, eventually coming to refer to the work as ‘the buddha of the bathroom’.

In 2008, at Krinzinger Gallery in Vienna, I put together a two person exhibition with Helen Chadwick, called Piss Off. I had filled the walls with my Piss Paintings, and on the floor were three Piss Flowers that Helen had made by casting the snow that she had pissed in. Art making is often related to art performance, which when taken to its logical conclusion means that just being alive is an art work.

You chose to crowdfund this work. What do you think about people buying these objects as a form of investment, rather than as an art object to be displayed?

The work on the Kickstarter is relatively cheap, so I would expect it to go up in value pretty fast – so it’s a good investment. Although really, I think people are keen to support and are interested in the idea of an actual artwork that can be displayed, or indeed to be part of the artwork existing. The work is accessible on lots of different levels, and for that reason it’s exciting. Currently, for the crowdfunding campaign, I’m imploring buyers to ‘be a part of making art history’, implying they are collaborating on something imbued with art historical rhetoric, yet is simultaneously the end of art. There is an intellectual investment – the collectors become an art syndicate.

The value of art has become so abstract; it is interesting to consider why people are buying work now. How does your work relate to the new era of NFTs?

The collector base is very different for NFTs. When Christie’s placed NFT’s through their auction, only 1% were art buyers and they retreated very quickly from the bid. I think that question might be better answered by friend Kenny Schachter.

Finally, you’ve been described as ‘punkish’. Is this work punk? Does punk still exist?

For me the idea of punk relates to anarchy, I am more interested in the idea of surrealism. ‘Punkish’ for me makes me think of the enfant terrible idea which frequently gets associated with the YBAs. I think punk art still has a role to play. I guess canning my piss is a punk gesture.