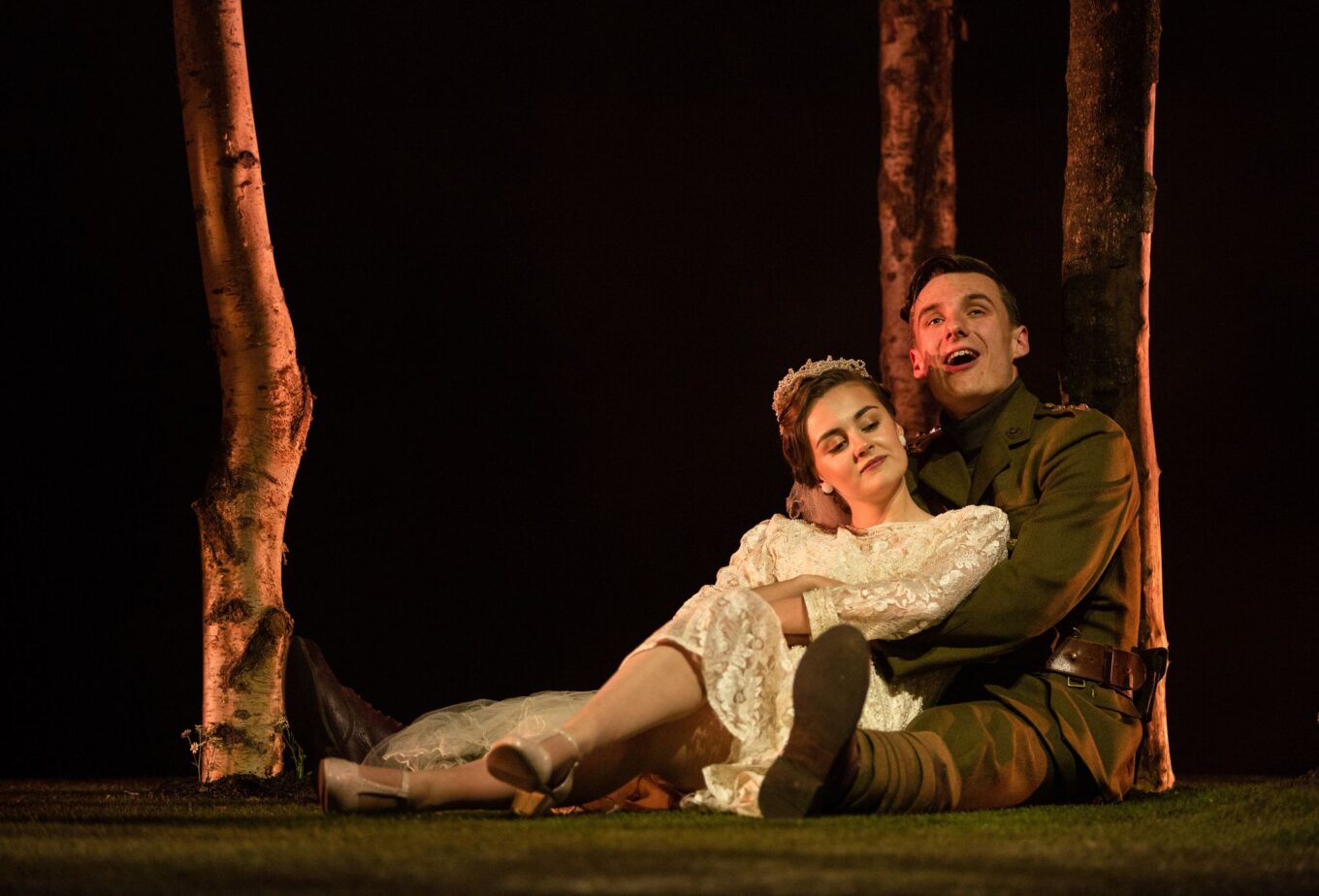 Following it’s run at the Shaftesbury Theatre earlier this year, the musical adaptation of DH Lawrence’s Lady Chatterley’s Lover (1928-1929) premiered at the Soho Screening Rooms last week, ahead of its digital run on Stream.Theatre this autumn. Directed by Sasha Regan, with a score by John Robinson and publication by Phil Willmott, this compelling production takes us through a tempestuous marriage and a concealed love affair, fostering discussions surrounding sexuality, power and class.

When Sir Clifford Chatterley (Sam Kipling) returns from war paralyzed from the waist down, the life he had planned with his new wife, Connie (Georgia Lennon), is shattered. Unable to have children, Clifford suggests Connie have an affair, so that they can raise a child together and further the Chatterley name, a notion Connie is horrified by. Isolated by her husband’s pursuit of literary success and his leadership over the coal-mines, Connie turns to the gamekeeper, Oliver Mellors (Michael Pickering), for company, and for the escapism she craves from the mundanity of her unfulfilling life. And so unfolds a production infused with romance, underpinned by poignant reflections on female agency and sexuality.

The opening scene between the newly wedded couple sets the tone for a musical that anticipates innocent romance, though eventually delivers a more nuanced and complex exploration of romantic relationships. The physical proximity of Lord and Lady Chatterley as they reflect on the origins of their relationship captures the intensity that exists between two lovers, whilst the opening lines of the first musical number – ‘How beautiful you are’ – carefully conceal any sign of the turbulence present  within their relationship in the not so distant future.

The following episode, capturing the moment Clifford is wounded in battle, demonstrates an inspired awareness of how stage and lighting can work together to accentuate the dramatic action within a performance. As the camera closes in on Clifford during his advancement on the battlefield, the lingering smoke, sinister red lights and the sound of a tumultuous explosion provide a sensory reflection of war.  Simultaneously, this stagecraft alerts the audience to the root of decline in the Chatterley marriage, and asks us to contemplate how the war  impacted a generation in a more general sense. The play is conscious of its situation within a social, political and economic context, the war being one of the many defining factors for a country that was to endure rapid transformation.

Each cast member exhibits a sensitive connection to their individual characters, allowing them to showcase an admirable level of depth and a necessary awareness of the stories, experiences and anxieties their characters harbour. From Clifford’s frustration of a life lost due to his injuries to Connie’s sudden outpouring of emotion in reaction to the suffocation she experiences within her marriage, each cast member offers us an insight into their thoughts, emotions and visions in such a way that it enlivens the performance.

The exquisite musical score by John Robinson perfectly compliments the sublime performances from the cast, who all showcase a necessary awareness of the stories, experiences and anxieties their characters harbour. The music adds pace and certainty to the performance, underlining the entirety of the production with the effect of connecting the individual scenes together in a cohesive whole. Although at times ominous and almost overwhelming in their power and energy, the eloquent melodies driven by the string instruments situate themselves within a background of the breathtaking vocal lines. Each cast member employs such emotion, rawness and intensity into their songs that it makes the experience of watching the production as breathtaking on screen as it was sure to be in the theatre.

A particularly unique element of the production is the use of two stages, one elevated above the other. The lower level acts as the grounds of the Chatterley estate, the tree trunks littered across the stage emphasising the fact it is an external sphere. It is distanced from the sophistication of the Chatterley residence above, and symbolic of Connie’s appreciation of the space to explore her relationship with Mellors, offering her the necessary distance from the claustrophobic atmosphere of her home with Clifford. An impression of superiority and grandess is alluded to in regards to the Chatterley’s residence, however the space remains notably bare save for Clifford’s desk and a permanently closed window, a reminder of the sense of unfulfillment Connie experiences within her marriage. The two stages have dissonant dynamics: there is an uncomfortable, sometimes volatile, atmosphere during the moments that occur on the higher stage, whereas the encounters between the characters on the lower stage are spirited and relaxed. Though often darkly lit in comparison to the sharp glow of the Chatterley dining room above, a sense of calm and tranquility is established on the lower stage to symbolise the freedom this space in nature offers Connie to explore another life away from the confinement and restrictions the Chatterley name represents.

A love-triangle ensues once Lady Chatterley and Mellors begin their affair; this tension is expertly crafted. A key moment of such tension takes place towards the end of the performance, when Mellors is invited to drink with the Chatterley’s and their friend, Tommy Dukes (Jake Halsey-Jones). Fusing social commentary regarding the dawn of the twentieth Century with jealousy and suspicion, Clifford and Mellors display their differing views and contrasting characters, the former condescending and pompous whilst the latter grounded and humble. It is a remarkable moment whereby we can read into the metaphorical implications behind their argument: Clifford, contained in class superiority and an archaic conviction to preserve the coal-mines, clashes with Mellors, whose relationship with Connie traverses class divisions and embraces the social change that Lawrence’s original literary work was preoccupied with.

The phrase ‘One is only a link in a chain’ sticks with you throughout the performance; possibly referring to the increasingly industrial nature of society and advancement of machinery and mechanism within the interwar period. The performance’s interest in how we navigate relationships – particularly physical ones – is interlaced with an exploration of the individual at a time of extensive political, economic and global change. How does one retain a sense of agency and individuality, when these very things are informed by the positions we hold in society, and indeed in relation to others? From the use of multiple stages, to Clifford’s life-changing injuries, to Mellors’ self-deprecation in light of Connie’s social standing, the musical is tangled with constant change. Perhaps the observations made by DH Lawrence in the early twentieth century are not wholly unlike the observations we can make of Britain today.

This intriguing, multi-layered performance, guided by an inspired musical score and the intimacy offered by the Soho Screening Rooms as the location of the musical’s on-screen debut, was captivating and thought-provoking, showcasing some of the best of the London theatrical scene.

Lady Chatterley’s Lover can be viewed on stream.theatre from 15th October to 21st November, find out more here.