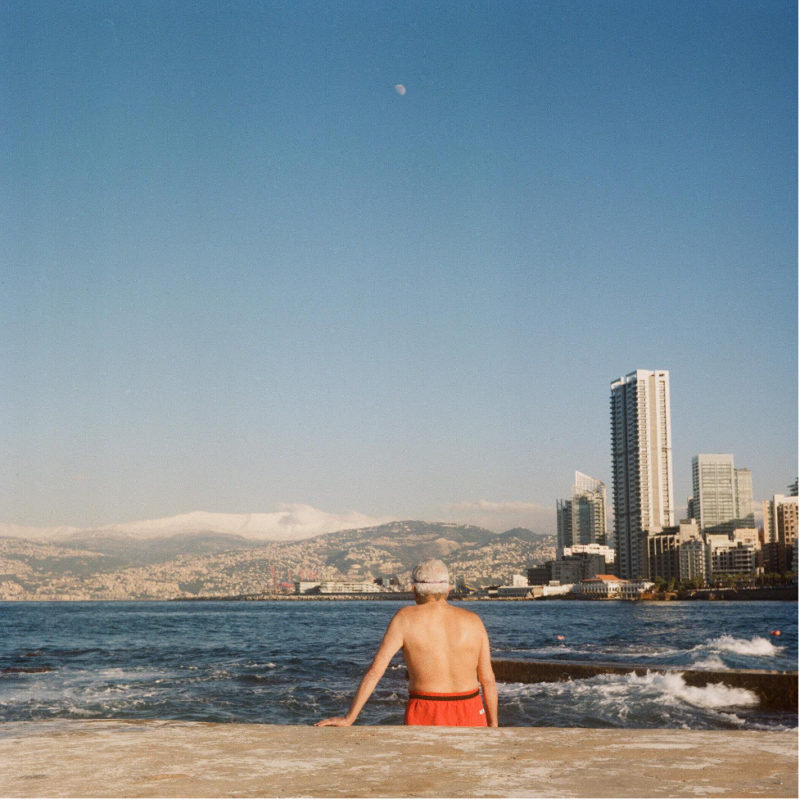 TAMARA SAADÉ is a photographer and journalist born and raised in Beirut, Lebanon. She lived in New York City for two years while studying journalism at Columbia University, returning to Beirut on the cusp of the pandemic. Using both analogue and digital formats, her works range from street photography to experimental polaroids, and encapsulate Lebanon’s ever-changing political landscape. Saadé’s photographs capture intense feelings which linger in the space between nostalgia, serenity, but also anger and grief. She demonstrates photography’s potential as a form of storytelling, outside the confines of boundaries and expectations.

From looking at your photos, they seem very engaged in politics. When you take photos, do you have the intention of your photos being political?

Sometimes, yes, I do have an intention in mind when I take my pictures. But for others, I’m simply capturing a moment, or something I find interesting, and then I like to leave it up to the viewer to see whatever they want to see. It depends on the type of work I’m doing. If I’m doing photojournalism and assignments, sometimes I have an intention in mind. If I’m doing street photography, it’s more about leaving marginal freedom to the viewer to imagine what they want. 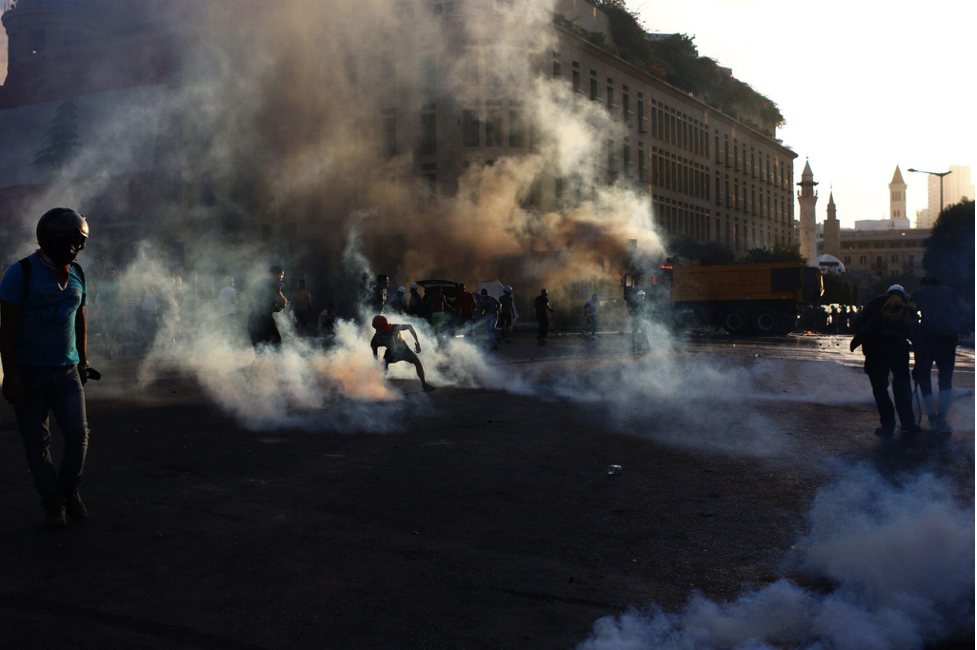 Honestly, wherever I go. I think there’s a lot of pressure when you travel to a new place as a photographer because you want to capture the best of it. I used to be sad that I wouldn’t get really strong pictures when travelling, but then I realised it’s very hard to capture those small instances in new environments. You are a stranger. You haven’t mastered that place just yet. That’s why I’m very comfortable in Beirut – I’ve been here my whole life, and I’ve photographed it so much. It’s easier for me to find those small moments because I know it by heart. I know the light at certain times of the day, and where people are at a certain hour. At the same time it’s always great to discover new places. There’s always that element of surprise when travelling.

How was it moving to New York after living in Lebanon for so long?

So, I moved there in 2018. I’m very lucky, because it was the last year before COVID hit. I mean, New York is very, very, very tough, but it’s an incredible city. It was very hard and I really insist on that. Don’t believe everything you see on social media: it’s curated, and I had really tough moments where I had to adapt. But [New York] was magical. It taught me so much about photography and journalism, and about myself  as well. I felt more confident. I feel so lucky I’ve had the chance to go.

Once the pandemic started, you returned to Lebanon. What was it like going back home after being away for two years? Especially since a lot had happened.

I moved in the midst of an economic crisis, which is very hard to both live and report on as a journalist. And two weeks after I came back, there was the August 4th port explosion, which I think shook everyone to their core. I don’t really believe in regrets. I would have loved to stay in New York, that’s for sure. But I don’t regret coming back; I’m very happy to be with family during these tough times, and with friends. I’m very happy to be reporting about Lebanon right now, I think it’s helped shape my career and given me incredible opportunities.

What was it like photographing the aftermath of the explosion?

The explosion happened at 6:07pm. You know, you always have that minute of disbelief, like, ‘Am I dreaming or did this happen?’ As soon as I knew that my family were okay, and once we’d called our friends and family abroad to assure them we are okay, I just tried to figure out what had happened. By 7:00pm, I didn’t think twice and just hopped on my bike and went down to the port. I was so taken by the shock, I forgot my mask and had to go back to get it – I forgot my batteries, I forgot memory cards. It was this whole mess. Once I got there, the scale of the thing was so huge it took me some time to understand the extent to which it had hit the city. It was really like a battlefield. It was the first time I had witnessed something like that as a photographer. I’ve been in conflict situations before as a journalist, but nothing ever that extreme. I was questioning whether I should take photos or not. It’s my hometown – I wasn’t that much of an exterior eye. I was trying to grasp it all, but my journalist side kept telling me, ‘Shoot, shoot, shoot’. At this point, I was walking and standing on top of buildings, people were screaming ‘Get out of here, the balcony is falling down’. I’ve never said this to anyone but, I had some really incredible shots, but I was so disorganised that when I got home I forgot to back them up on my laptop. That same week I was filming the army, and they confiscated my memory card. So I lost quite a lot of pictures and I can’t stop blaming myself for that. But I’ve been trying to cut myself some slack because it was hard to witness that.

Facing the conflict between your professional and personal side must have been an intense journey. Do you think you have had many instances when your separate instincts as a photographer come into conflict?

When I was a bit younger, I used to wonder why I did this. Especially when things got a bit hard. I thought about doing something that didn’t involve witnessing such hardships. But then I’d think, ‘I do have a sensitivity that enables me to portray and immortalise certain things’, and hoped that my work would change things for the better. If I can get someone to chuckle at a picture, to feel a bit better about themselves, to notice something nice, or just put a smile on someone’s face even if just for a minute, even if they have a bad day, that’s what I see as changing something for the better. That’s the biggest accomplishment for me.

What are some of your personal favourite works?

I really do have a soft spot for street photography. And polaroids. There is a certain magic to seeing a picture unfold in front of you. I also love to give pictures to the people I photograph. Right now, I’m most excited about the project I’m about to start, which is on hairdressers. I’m really excited because I’ve been meaning to do it for a year but I was too shy to start.

I saw that you did some very experimental works with polaroids. Can you talk me through the process of creating them?

There is a lot of stuff you can do with polaroids, beside capturing images. I had all sorts of polaroids I wasn’t using, failed, underexposed or overexposed ones. I’m trying as much as I can to have a zero-waste approach to photography. Especially analogue, which leaves a big carbon footprint with developing and all that. I’m trying to have a circular process. I came across different techniques, some of them are really easy, like putting polaroids in water for two months and seeing what happens. It’s incredible, to see how the polaroids are basically alive. The chemistry in it never stops evolving. I started with ‘souping’: you put a picture in liquid; soap, tea, or whatever, and you see what happens. I started doing it with different liquids. There is a series I’ve done with arabic coffee: I let the pictures soak for two months. Then I wanted to add more colours, so I invested in ink and played around with it. All this really started in the pandemic when I had nothing to do. Honestly, it was the best time. 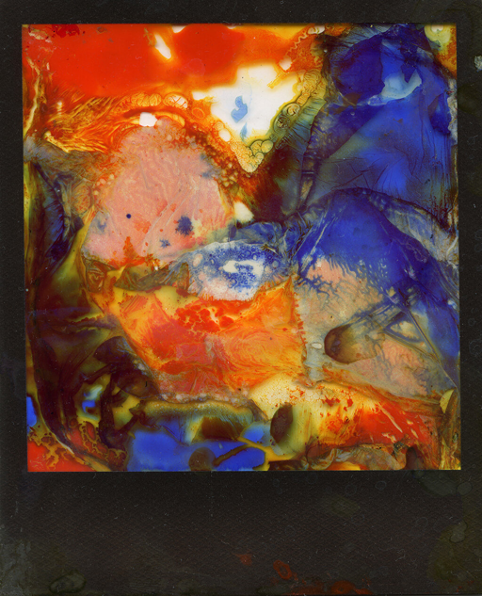 I saw that you created NFTs with your experimental polaroids. What are your thoughts on NFTs?

I’m very new to NFTs. It’s really cool – again, I don’t really know where I’m going to go with them, but I think there is a lot of potential to them because they really democratise the concept of art galleries and creating. I was initially very adamant about not wanting my regular photographs to be NFTs, I didn’t want to give up photographs for less than what they are worth. That’s why I’m focusing more on my polaroid manipulations. I think it’s very interesting to have such an analogue process digitally rendered.

It’s refreshing seeing you fuse traditional medium with such a modern concept.

I think there are no rules in art. As long as there is consent and you’re not hurting anyone – which are my two main mottos in life – there are no rules. For me, in school and in Lebanese society, they are still a bit rigid about things, not bending the rules. I think, ‘Hell no, I’m an artist’. I think art is meant to be experimental. It doesn’t need to reach anywhere as long as you’re happy about putting it out there, that’s it.

All images courtesy of Tamara Saadé.