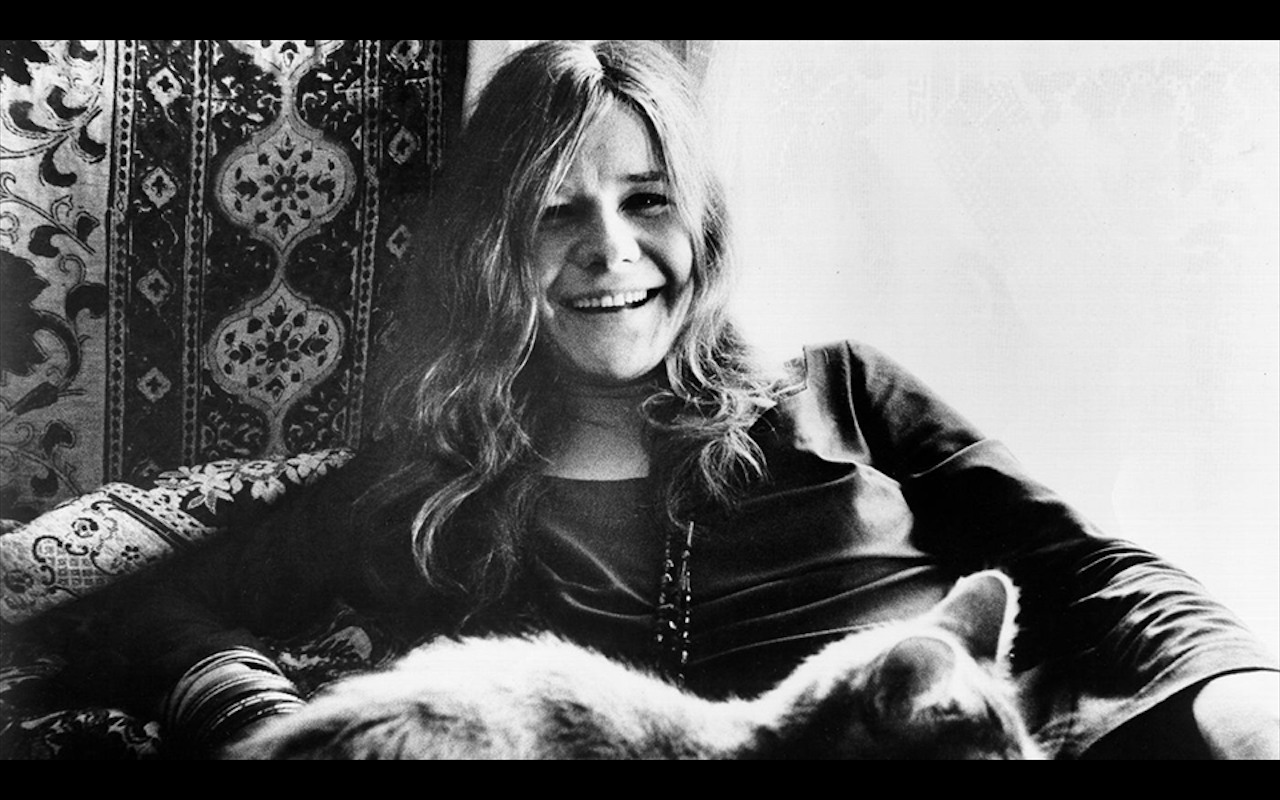 What else, what else is there to do?
Oh and I know how you feel
I know you feel that you’re through

The lines channel empathy and despair, and in Janis: Little Girl Blue, Berg balances this sense of the blues with the psychedelia of Joplin’s life and music. Like Jimi Hendrix and Jim Morrison, Joplin died aged 27 at the turn of the 70s following drug abuse. Through interviews with friends and family, newspaper cuttings, and, most compellingly, diary entries, Berg doesn’t just emphasise what made Joplin an icon; she uncovers the fragility beneath a public image, as off-stage life fails to match the high of performance.

Berg’s film is the latest to document the life and death of someone in the ‘27 Club’, after Kurt Cobain: Montage of Heck and Amy took similar approaches to humanise the story of a star. But while the Cobain and Winehouse documentaries have the benefit of telling relatively recent stories, providing a more immediate sense of pathos, what Berg creates is an elegant portrait of 1960s Americana and the decline of counter-culture ideals post-Woodstock.

Janis Joplin’s life perfectly covers the story of the 60s in America: aged 17 as the decade began, her final 10 years would be spent blossoming into a musical talent while battling her self-doubt and heroin addiction, as the country experienced a similar state of flux. Berg tells her story simply, in chronological order, beginning with Joplin’s difficult in childhood in Texas, where she was bullied at school because of her appearance and liberal views.

A family member notes: “she couldn’t figure out how to make herself like everybody else … Thank God”. Berg gracefully presents the way Joplin developed a rebellious streak and turned a troubled childhood into the fuel of her raw, bluesy vocals. Joplin reached the University of Texas at Austin, where she was voted ‘Ugliest Man on Campus’ by frat boys — an incident that, according to a close friend, devastated her, but perhaps drove her on to success.

Joplin travelled back and forth between Texas and California as she chased her singing career, her journey illustrating the 60s dream at its peak. As she strived for fame in 1963 San Francisco, playing hootenannies and gaining recognition, a friend tells Berg of how Joplin first met Bob Dylan: “we all gonna be famous”, he said. And Joplin’s diary entries, brought to life by the voice of Cat Power and beautiful close-ups of the singer’s original handwriting, evoke the rush of a musical revolution, as Joplin joined the band Big Brother and the Holding Company: “the whole city has gone rock ’n’ roll”.

At the documentary’s high points, colourful, pixellated footage of Joplin on stage, voice rasping, provides a spine-tingling experience of the singer in action. The vivid colour and driving guitar of these scenes represents the enchantment and illusion of the ephemeral psychedelic rock era, painting how Joplin’s life reached its drug-like peaks on-stage — especially at the Monterey Pop Festival, where she stepped into the public eye — before the lows that inevitably followed.

Berg ensures we realize the parallel battle Joplin had with her off-stage life. Her diary reads “I wanna be happy so fucking bad”: a pursuit in conflict with the way “she drank like she did”, as a friend says, to “feel everybody’s pain” so she could adequately sing the blues. The first words we hear in the documentary are those of Joplin in an archived interview, explaining how singing is all about feeling something you can’t feel anywhere else. In the hope of maintaining this feeling, Joplin turned to heroine at various points in her 20s, an inclination which ultimately would end her life.

At times Joplin would find a tranquil joy, as in a trip to Brazil shortly before her death when she had briefly stopped alcohol and drug use: a ‘little girl lost’ but free. Berg finds poetic photographs of this trip, and behind-the-scenes footage of Woodstock in 1969, to depict the last year of Joplin’s life, when highs and lows fluctuated until she lost control. Underpinned by the power of Joplin’s voice on its soundtrack, Janis: Little Girl Blue paints a passionate and melancholic portrait of a musical legacy frozen in time.

‘Janis: Little Girl Blue’ is screening at the DocHouse until 25th February. Tickets are available here.