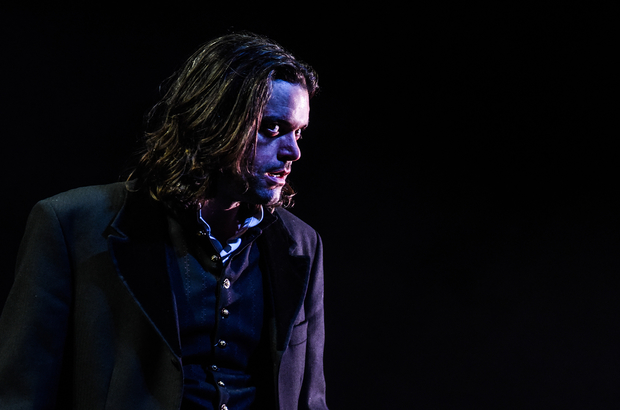 ‘Out of his time or out of his mind?’ asks Dr. Hastie Lanyon (Rowena Lennon), Dr Jekyll’s contemporary. Blackeyed Theatre’s thrilling adaptation of Robert Louis Stevenson’s 1886 gothic novella has at its heart the drive for world-changing scientific discovery, the agony of insanity and a moving romance between the Irish songbird Eleanor (Paige Round) and the title character (Jack Bannell). Nick Lane’s production at Greenwich Theatre takes the audience right back to the dark and putrid streets of nineteenth century London with opulent costumes and a sparse yet authentic set. By far, the crowning achievement of this production is its imaginative choreography, using movement and minimal set changes to great effect.

Dr. Jekyll is a quick-witted yet arrogant scientist whose field of study is the human mind. His neurological odyssey for a compound that might ‘split the mind’ and reveal its mysteries begins with experimentation on rats. However, as the doctor’s hunger for answers evolves, he begins plucking human test subjects from the ranks of the poor and disenfranchised. His rationale is that a handful of lives squandered in the name of science pales in comparison to a revolution in the understanding of the psyche. The production raises some poignant questions about ethical experimentation, circling around that well-known moral dilemma: would you sacrifice one person to save the lives of many? Furthermore, it is the ill and impoverished who are targeted in this dramatisation. A prostitute, disfigured by the notorious Hyde, encounters the police only to realise they are ‘not here for the likes of [her]’, and it takes the killing of someone rather higher up the pecking order – an MP – to provoke any curiosity on the part of the authorities. Although the symbolism here is undeniable, it would have been good to see further exploration of the classist and sexist implications of Jekyll’s crimes — in reality, of course, it is the most disadvantaged that suffer from the woefully inadequate provision and quality of mental health treatment.

After his misdemeanours are discovered by his only friend, Dr. Lanyon, who threatens to expose him, Jekyll makes himself the subject of his own experiments. He enters a world of unknowns: a blood-red lit realm of shadows and ominous music in which we encounter the menacing Edward Hyde. Bannell’s performance of the character’s transformation is visceral. As he changes from Jekyll to Hyde, he contorts himself wildly, altering his physical presence and voice. Jekyll was a physically decrepit man hunched over a walking stick, wincing with every step and every word — an interpretation quite clearly based on director Nick Lane’s own circumstances. Lane permanently injured his spinal cord in a car accident in his twenties. By contrast, his newfound alter-ego, Hyde, is a broader shouldered imposing figure and sexual predator for whom the cane becomes a menacing weapon. An interesting parallel between physical and mental health is established through the transformation. This focus on Jekyll’s physical weakness as a source of frustration, and the possibility of a ‘rejuvenating’ elixir, is a unique take on the cult classic.

The tetrad cast of The Strange Case of Dr Jekyll and Mr Hyde collectively perform sixteen distinct characters. All four actors are profoundly engaging in each of their parts, but much of the play’s content seems superfluous and adds little to the narrative. Unnecessary scenes dilute an otherwise captivating rendition. In general, however, this is a creatively fresh take on a well-known story with a remarkable approach to storytelling, aided by the use of inventive choreography throughout. This approach to movement is in no way superfluous, and marks Bannell out as a phenomenal lead. His extremely realistic beating to death of an innocent bystander in slow motion is a truly disturbing moment, and just one of the many original elements weaved into Lane’s production. Ultimately, this is a performance that poignantly highlights the importance of mental health research, painting Jekyll as an unrelenting pioneer of work within the field.