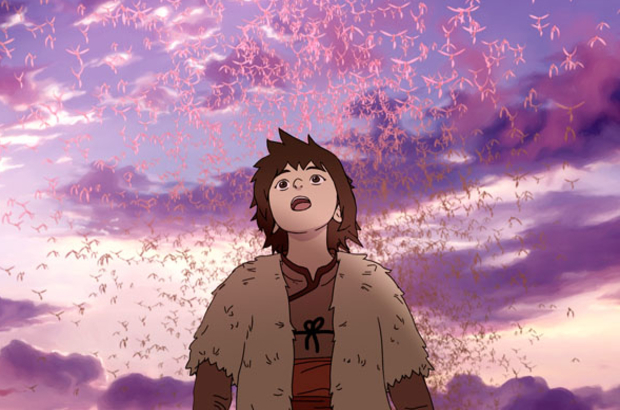 In recent years, Korean animation studios have started to come into their own, having previously been relegated to contractual animation for their more renowned Japanese and American siblings. In 2011 Leafie, a Hen into the Wild managed to break into the domestic film market and achieve financial success, while the animated series Pororo the Little Penguin garnered domestic and international recognition. With Kai, produced by Yeon Sang-ho of Train to Busan and directed by Lee Seong-gang (arguably Korea’s answer to Miyazaki) Korea seems poised to continue this trend.

In a beautifully animated world of vast plains and icy forests, Kai tells the story of Kai and Shamui, siblings in a nomadic tribe. When the two are separated by an avalanche, Shamui ends up in the clutches of Hattan, an evil snow queen seeking to freeze the grasslands of Central Asia. As Kai embarks on an epic journey to protect his village, he meets a whole range of fantastical characters from river spirits to a giant, magical moose.

Does this sound familiar? Kai purposefully borrows elements and plot lines from a smorgasbord of other animated films and rehashes them into a new film. Beyond the animation, which is in itself Miyazaki-esque, it is not difficult to identify many aspects of familiar animations in Kai. The endearing comic relief in the form of an unidentifiable pink blob is reminiscent of the titular character from My Neighbour Totoro; many characteristics are also borrowed from another coming of age tale set in a fantastical world, the acclaimed Spirited Away. Aside from these Studio Ghibli , Kai also closely parallels Disney’s Frozen, with its story of sibling separation and reconciliation. One finds it hard to look at Kai as separate from all the films it is inspired by (perhaps too closely).

The problem that this creates for Kai is that it becomes difficult to separate from all the films it is inspired by. However, predictability is not necessarily a bad thing: conscious borrowing and referencing has been a crucial aspect of narratives form Chaucer to the modern day. Being fair to Kai, with the enormous popularity of the animated adventure and fairy tale genres, it would be almost impossible to create an entirely original adventure-themed plot. The proliferation of typical fairy tale tropes serves to make the film easily understandable, and the simple plot leaves the central message uncomplicated by superfluous details.

At its core Kai is a heartwarming, humorous tale of growing up and familial love. The film is animated with almost surreal fluidity and the voice actors are perfectly equipped to play their respective characters, allowing the film to meld as a cohesive whole. For those who grew up watching such films, Kai is likely to provide an almost palpable sense of nostalgia, and for those who watch this as they grow up, Kai presents a modern take on a tried and tested formula.

If Yeon Sang-ho had intended to recreate a Korean version of the classic coming of age tale, he has certainly achieved his goal. However, Kai does leave the viewer wanting more, especially when one considers what movers and shakers Yeon Sang-ho and Lee Seong-gang are in the Korean film industry. One might expect that these two would have brought more to the table, with hugely innovative animations such as The King of Pigs and My Beautiful Girl, Mari as their respective brainchildren.

Kai is gorgeously animated and uplifting, almost magically so. It is definitely worth watching, if only to reconnect with your inner twelve year old or to smile to yourself for the duration of the film.