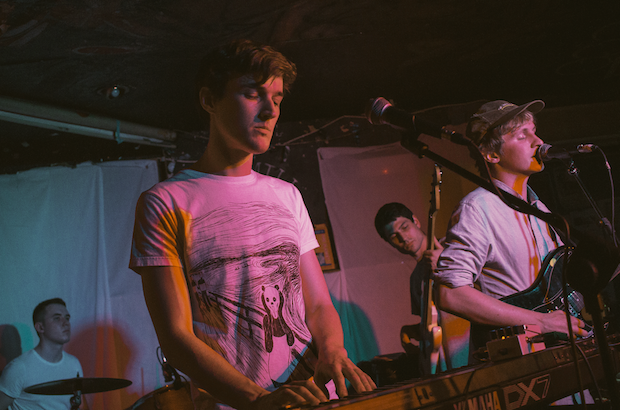 Tracks and words from THE WELL RESTED.

Introducing ‘Towers’, three and a half minutes of shimmering indie pop from The Well Rested. Take a listen to ‘Towers’ below and read what the band have to say about their release:

Oliver Ninnis explains that the track aims to render ‘the romantic discourse of unrequited love in a way that is at once anachronistic and current. The verses remark on technological methods of communication and transportation, letters & bicycles, that seem nostalgic and out of place in our world of instant messaging and high-speed rail, yet are also anticipatory of a future world simplified by the obliterating power of political folly’.

The band’s video for ‘Towers’ follows this interest: raised high above Soho, the band look down on the cityscape below, both in the big smoke and set apart. This reflexive doubling overlaid with an aura of simplicity in the music video, directed by Matt Ritson, gestures to The Well Rested’s characteristic duplicitous playfulness with the archaic and the modern; the band state that ‘this anachronistic approach is also echoed in the song’s production: a hybrid of digital quantisation and analogue tape envelopes, and a mixture of surf guitars and gospel synths’.

‘Towers takes up our love of commercial pop with the addition of a good smear of DIY enthusiasm on the surface’. The dream-like jangle of the songs,  with wandering vocal and guitar lines, offers a leisurely daze, reminiscent of the brand of pop made popular by the likes of Mac DeMarco and HOMESHAKE.

Ninnis goes on, ‘as the efforts of the scientific community edge ever closer to a technological singularity, artists working at the coalface of culture creep further behind the saggy sofa of history to gain perspective over the horror that awaits us’. The Well Rested work with this philosophy as they fight order with chaos – ‘channelling the dichotomous archetypes of Dionysus and Apollo through the entanglement of Oliver Ninnis’ vodka fuelled poetry and Andrew Ford’s devotional recording-boffinry to produce work which is both discursive and sensual’.

The Well Rested are currently performing as a trio and you can catch them live at Lion, Coffee + Records on December 17th. Take  a listen to the band’s latest release, ‘The Well Rested EP’, on their Bandcamp. And also check out the video for ‘Neeas’ below,  another song from the EP: