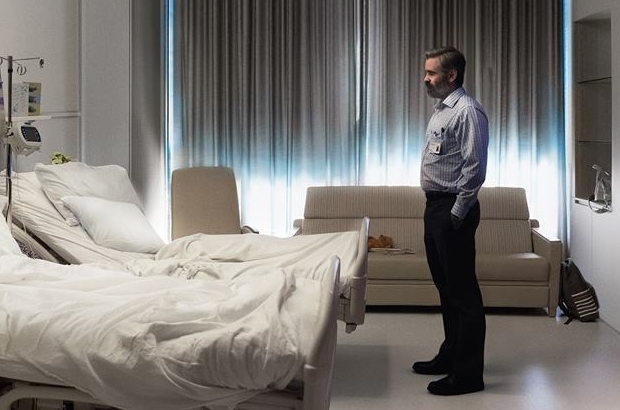 Resurrecting the Greek tragedy of Iphigenia in the setting of the modern material world, Yorgos Lanthimos’s latest film, The Killing of a Sacred a Deer, is an art-house horror of multiple layers. A master of allegories, Lanthimos forms unlikely parallels between the supernatural and the mundane to form this horror comedy, whose unsettling feel is all the more apparent because of the seamless injection of absurdity into a 21st century universe. This is a film which leaves the viewer emotionally conflicted and disturbed.

Beginning with a close-up sequence of open-heart surgery, we quickly learn that Lanthimos is not a director to shy away from the grotesque in a horror genre. Colin Farrell’s character, the heart-surgeon Steven Murphy, is seen symbolically removing his blood-stained gloves. Steven’s life appears ordinary at first glance: his ophthalmologist wife and two teenage children constitute an idyllic nuclear family, living in an ostentatious, cavernous house. And yet within their materially rich life, intimacy is missing. Continuing the idiosyncratic style of Lanthimos’s 2015 film The Lobster, dialogue is minimal and monotonous as conversation ranges from menstruation to lemon tarts. But what makes the film so watchable is the subtext within every discourse. The almost laughable sex scene when Steven’s wife Anna (Nicole Kidman) asks matter-of-factly if he wants ‘general anaesthetic?’ perhaps implies the surgeon’s guilt or insecurity, and yet the sacrificial suggestion harks back to the mythological title.

Family life may be somewhat off for Steven, but it is the meeting with Martin (Barry Keoghan) that creates a more sinister tone within the narrative. Never one to give the game away, Lanthimos doesn’t reveal the relationship between Steven and Martin too early on. And thus we are left wondering. Is he the child of a previous relationship? An unconventional love affair?

Incongruous with the humdrum setting and conversation for the most part, oblique camera angles and operatic music make their meetings painfully suspenseful and jarring. The ambiguity of Martin’s character is never fully resolved. A polite but  disturbed boy (who, at times, hints at having an Oedipus complex) at times we sympathise with him and later fear him: He is neither immature victim seeking vengeance nor demonic villain. What is clear is the seemingly vice-like grip Martin has over Steven: their relationship is predicated upon blackmail, and Steven placates Martin with gifts, nurturing and kind. And yet there is a mild cautiousness to his manner from the offset. I am reminded of Freud’s the ‘uncanny’, for even the most mundane scenes are laced with an eerie, unnerving feeling.

On another level, there could be a classist implication. Steven educates Martin in the ways of the world; a rich, self-righteous man supporting a poor, fatherless teenager, living in a ‘not so nice house in a not so nice neighbourhood’, as Martin describes it. Adding a further sinister dimension, the insidious yet realistic exploitation of the power-dynamic in this relationship is juxtaposed with the explicit flashes of brutal horror, which build as the ancient curse begins to dominate the story. Lanthimos’s physical torment of a wealthy, privileged man, by means of a mythological curse constructed by an emotionally-neglected boy, may be a comment on contemporary inequality, and the ignorance and lack of empathy of the wealthy upper class towards other groups in society: Steven’s first mistake is his arrogance.

As the film progresses, the absurd takes over. The truth behind the strange acquaintance is unveiled. Martin is the son of a past patient of Steven’s who died in the operating theatre. As Martin slowly integrates himself into the family unit, ordinarily humorous scenes become strangely frightening. ‘I won’t let you leave without you trying my tart!’ screams Martin’s mother, after Steven rejects her sexual advances when invited over for dinner, provoking a rather uncomfortable giggle. When Steven attempts to withdraw from the situation, Martin retaliates.

As per the Greek myth, Martin unleashes his supernatural revenge, cursing Steven’s family one by one. Stage one: paralysis from the legs down; Stage Two: Refusal to eat; Stage Three: bleeding from the eyes; Stage Four: death – unless Steven chooses one of his family members, his ‘sacred deer’, to sacrifice. An eye for an eye, as Martin sees it, to balance out the deaths in their respective families.

As the picture-perfect family life is deconstructed bit by bit, the preposterous pragmatism and resignation to their fates prevails, in a disturbing manner. The camera prowls amongst the cast, cut with striking close-ups and is overlaid with an operatic, theatrical soundtrack. The psychic dilemma created by Martin is leaves Steven, the man of science, utterly at sea, unable to comprehend a supernatural scenario. As things deteriorate, the logic vs emotion conundrum dealt in such a farcically flat approach is deeply unnerving: which of his ‘sacred deer’ will Steven choose?

The Killing of a Sacred Deer may sound like an overdone horror film, which predictably tears down the facade of the cookie-cutter, middle class, white family. But Lanthimos’s approach is unique, absurdly bringing a terrible mythological curse into a modern setting with a blacker-than-black comic quality and full-blown body horror. Expect to be repulsed, impressed and amused in equal measure. Delving deep into subconscious fears through the metaphorical lens of an ancient tragedy, Lanthimos does not let us get away emotionally unscathed.

‘The Killing of a Sacred Deer’ is on general release.