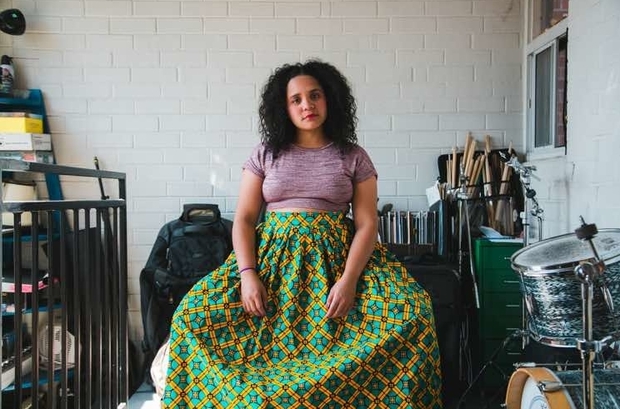 In September 2017, Lido Pimienta won the Polaris Music Prize with her album La Papessa, beating Canadian heavyweights Feist and Leonard Cohen. Visibly shocked, she told the audience that ‘perhaps the only thing that I can say and hope is that the Aryan specimen who told me to go back to my country two weeks after arriving in London, Ontario, Canada, is watching this’. Pimienta, who is Colombian-Canadian and Afro-indigenous, is unafraid to tackle white supremacy head on. She explains to me that it just ‘needed to be said’. Her outspokenness is admirable, especially given the virulent abuse she is constantly subject to online, from neo-nazis and alt-righters alike. Recently in Halifax, she was at the center of controversy after she asked people of colour to move to the front of the audience, a move which is often a part of her sets. One member of the audience did not take lightly to the request, and when the story caught wind on line, alt-righters unleashed a torrent of abuse, accusing her of ‘reverse racism’ and ‘white segregation’. Pimienta acknowledges that ‘this is what happens when people speak up’, but nevertheless she is justifiably ‘sad and traumatised by the whole thing’.

The event is a stark reminder of the oppression people of colour face every day, even in supposed liberal utopias like Canada. Pimienta says: ‘Canada is supposedly the best country in the world because we embrace immigration, we embrace people of all religions – but we forget to speak about indigenous people. We are able to enjoy all this high quality Canadian healthcare, and such like, at the expense of indigenous people here’. The issues facing indigenous communities are a recurring theme on La Papessa— on opening track ‘Agua’, her piercing vocals cut through a bed of dreamy synths, addressing the Earth’s most precious element: water. Both in Canada and Colombia, the legacy of colonialism and systemic racism has meant that large portions of indigenous communities do not have access to clean, safe water. The song is a sharp reminder of the basic human rights violations that indigenous people suffer every day, despite our supposed progress.

Though Pimienta’s music is full of serious political themes, she delivers them in with sharp humour and a certain degree of playfulness. In the video for ‘La Capacidad’, she is surrounded by colourful shapes and dances gleefully. There’s a playful sarcasm to her lyrics too:  ‘tu eres el hombre y yo soy la mujer/ Pero esto no quiere decir que me vida sucede por ti’ (you are the man and I am the woman/ But this doesn’t mean that my life revolves around you). She’s making poignant social commentary and tackling serious issues such as domestic abuse, but it’s done with an overt sense of humour and directness. Pimienta tells me that this because ‘I don’t like people patronising me, so I’m not about to patronise anyone’. Her candidness is something she shares in common with hip hop artist Cardi B, whom she called in an interview with The Guardian ‘my patron and my saint’. Both portray the realities of been Latina women of colour in nations with a continuing legacy of colonialism and white supremacy, but do so in a way that is relatable and cuts through the sometimes exclusionary and elitist rhetoric of white, mainstream feminism. For Pimienta, as well, it is ‘a practice of self care’, and a way to extend solidarity with the women who have suffered from abuse: they see, in the figure of Pimienta, ‘that it will get better’.

Since the election of Donald Trump, mainstream music has tentatively begun to engage with political sentiments. Recently, Eminem delivered an anti-trump freestyle and was showered with praise, with one high-profile white political commentator saying that ‘after 27 years of doubts about rap, I am now an Eminem fan’ –  although many black rappers have been tackling issues such as systemic racism for decades, often in far more compelling ways. When I ask Pimienta about what she thinks of the freestyle, she instantly rolls her eyes and asks: ‘Where were you four years ago? Were you not listening to the news when in the Obama administration there was the largest amount of deportation of Latin American families? Was that not worthy of an epic freestyle, Eminem?’. She also questions his absolute love of veterans: ‘You know what your veterans do in my country? Are you aware? There’s ways that you can phrase that. The veterans from the US that go with the false assumption that they’re going to fight freedom— what freedom? You are free. Freedom to what? Freedom to buy oil for a $1 a gallon?.’ Here, Pimienta criticises mainstream, neoliberal commentators who critique Trump but also turn a blind eye to decades of Western imperialism, settler colonialism and white supremacy. Pimienta seems to be the antidote to this collective amnesia, challenging us to confront our past in order to understand the precariousness of our current situation.

And yet, despite her critical view of Colombia and Canada, she insists that she is proud to be both. She describes her next album, Miss Colombia, as a ‘cynical love letter to my country’ set to ‘industrial reggaeton with a bunch of brass’. The album’s title, she explains, is a reference to the infamous Steve Harvey incident in which Miss Colombia was named Miss Universe but then admitted he made a mistake and it was in fact Miss Phillippines. She says that following the incident, ‘all hell broke loose’ and  ‘I’ve never seen Colombians so angry before’. Her analysis of the situation is characteristically blunt: ‘there’s indigenous kids dying right now because they don’t have water, and this is what you decide to be united about, motherfuckers?’. The reaction from many Colombians, who hurled racist abuse at both Steve Harvey and Miss Philippines, made her ‘feel ashamed to be Colombian’. She elaborates on this sense of shame: ‘How is it possible to be so simultaneously proud to be Colombian and yet so angry with Colombia?’. Her music does not feel like an attempt at reconciliation; instead, it embraces this sense of ambiguity. Perhaps Pimienta views this ambivalence as a necessary aspect of achieving the radical social change she envisions – it does not shy away from difficult, perhaps contradictory, thoughts and ideas.

Despite the complexity of Pimienta’s work, her art is fundamentally visceral, and encourages an immediate reaction. Her recorded music might have a high-gloss finish, a dizzying marriage of complex brass arrangements and synthetic textures, but live, her work takes on a totally different complexion. Her body moves with the music, the beats rattle, the vocals overwhelm. Even amidst this assault on the senses, her playfulness shines through; she tells one of her band members on stage that ‘I might be pregnant with your baby… keep up with my instagram story for news updates on that’. Pimienta says she wants her music to be accessible as possible, whilst still remaining multifaceted. Pimienta’s work now, more than ever, feels extraordinarily relevant; her vision is clearer and more concentrated than it has ever been before. ‘If I can create an album that can convey all these emotions and have no words, that would be great’, she says. ‘Maybe I’ll do it’.