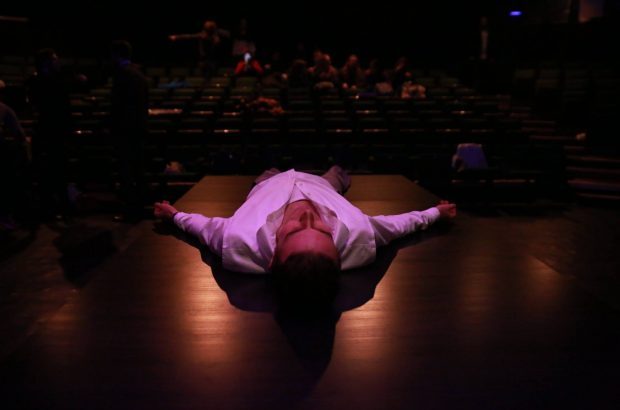 February 2nd 2017 marked the first performance of a play that director Oliver Marsh had reputedly been brooding on ‘for nine long years’. Considered by some to be Shakespeare’s grandest play, Lear follows the consequences of a king’s distribution of his land amongst his daughters according to the love they claim they have for him. King Lear promptly exiles Cordelia, the only daughter who actually sort of loves him, on account of her insufficient praise of him (‘Nothing, my lord’) and in the ensuing acts descends into madness.

Marsh’s innovative and ambitious production situated the characters in the financial crisis of 2008, within the heart of the banking world itself and replete with what (fittingly) must have been a costly wardrobe of appropriately-noughties slim-cut suits, slinky dresses and women’s power jackets selected by costume designer Becky Kells. The night offered relentlessly superb acting and a powerful performance of an inspired interpretation.

From the moment the lights came up, Ben Teare emanated both authority and doubt in perfect measures – essential for any convincing portrayal of King Lear. Lear’s character was greatly complemented by the setting and its general mood of excessive confidence mixed with instability – itself a comment back onto the roots of the financial crisis. Other outstanding performances came from Florence Wooley as Goneril and James Cassir as Kent – the former’s malice manifesting itself through her poised coldness and the latter delivering a superb rally of insults at Oswald (Finn Burge). This tirade was one moment in a series of hilarious interactions between Burge’s Oswald and Cassir’s Kent – characters unusually and ingeniously opposed in this production as a sort of high-camp slapstick double-act, comic relief well received in what is a particularly heavy tragedy.

Although Goneril and Regan can often be indistinguishable, coming across as a pair equal in evil and deception, Hansy Shore’s Regan was quite distinct from her sister. Polly Creed, too, played a heartfelt Cordelia, aptly the polar opposite of her two sisters. The only times the performance faltered at all, came with the deaths towards the end, where the dying screams became more ear-wrenching than heart-wrenching. Nonetheless, Gloucester’s (Bella Driessen) eye-gouging was executed with brutal efficiency by Alex Lopez’s Albany, holding the audience in suspense before turning heads in disgust at the gruesome act (and surely in panic, too, at all that blood-stained and un-washable costumery?).

And all of this is not to ignore the superb wider cast, who with deft and unique touches fuelled a mood of constant busy-ness and instability through their insistent Yes-Man-ism. Rather than props, throughout it was the actors who created a sense of setting. When the action takes to London’s backstreets in the stormy heath scenes, those who used to be Lear’s chattering and bustling band of followers, return as the parka-wrapped homeless strewn motionlessly across the stage.

Setting Lear in the financial crisis was highly effective, adding new meanings to an oft-staged play and achieving a wholly unique performance, as the tragic downfall of what seemed like each and every character in turn, reflected the catastrophe of the collapse of the banks, while simultaneously the madness building throughout the piece reflected the confusion and uncertainty of that time. This modernisation’s success lies in the accessibility such a sense of confusion has to an audience that experienced such anger and helpless uncertainty only 9 years ago.

By the arrival of Teare’s climactic display of Lear in all his faculties towards the very end, I was fully invested, at which point he enigmatically gestures towards the audience crying, ‘Look there, look there!’ This ending finally brings to bear the full force of personal, social and political crisis on us the audience. This Lear seems to be saying that we should not be invested in the individuals in the play, but in one another, as it brings all of their relationships to the point of collapse.