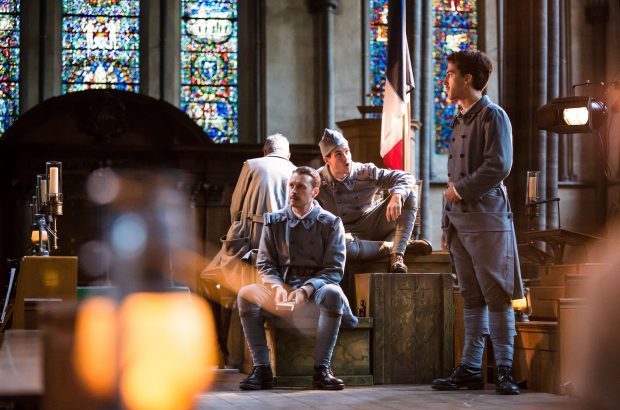 There are few venues more atmospheric than Southwark Cathedral. It is the perfect setting for Antic Disposition’s intimate, bare and emotionally-charged adaptation of Shakespeare’s Henry V.

The play begins with two wounded soldiers–one French, one British–who are evacuated to a nearby military field hospital in the midst of the First World War. As a gesture, the British soldier gifts the Frenchman a copy of his only book, Shakespeare’s Henry V. In order to pass time and momentarily escape from the battles on-going around them, the soldiers decide to put on a production of the play.

This idea of two people turning to theatre as a form of escapism is a simple one, but it posed a unique challenge in the framing of the dual narratives. Directors Ben Horlsen and John Risbero skillfully use this narrative structure in order to point to the fragile artificiality of theatre. Huddled on crates placed across from one another, the two soldiers watch as their fellow men bungle the opening lines of the play, laughing along with the audience as the actors attempt to ease into the physicality of their characters. The audience became a blur of theatregoers and spectating soldiers, and the two narratives weaved in and out inauspiciously, to the point that the reality of both began to merge. Throughout, the soldiers’ production of Henry V seemed to be on the edge of falling apart. Indeed, in what was one of the production’s most powerful scenes, the harrowing reality of war is brought sharply back into focus when the fictitious threat of a gun causes a soldier to fall the ground, shaking violently on the floor in between mangled cries.

That said, the direction struggled to resolve a central issue to this sort of adaptation, that of reading both stories–the soldiers’ and that of Henry V. The final scene elides the courtship of the Princess by the young King Henry with that of the nurse by the soldier. Particular emphasis was placed on the comedic and light-hearted nature of the dialogue, and the King’s conversational style sharply contrasted with the exaggeratedly stilted delivery of the Princess. This approach worked wonderfully in the telling of the awkward beginnings of love between the soldier and the nurse, yet the sinister undertones of the text itself were overlooked.

The language barrier between the King and the Princess is more than just a comedic device: it reinforces the position of the Princess as a political pawn while making a greater point about the dynamics of power, political and gendered. This version of the scene, boiled down to its comedic elements, ultimately sacrifices the nuances of its original in order to accommodate the second narrative. This sort of adaptation, in vogue since Tom Stoppard’s highly-entertaining, pseudo-philosophical strip down and overhaul of Hamlet in Rosencrantz and Guildenstern are Dead (1966), results in engaging and entertaining shows, which–to give Antic Disposition their due–often make interesting comment on ways we use theatre now, but, in so far as I have seen them done, never can quite escape this limbo space between new writing and the plays they are parasitical on. The soldiers read Henry V as a play that develops and helps us understand fundamental and universal human qualities, and this is exactly what this sort of adaptation offers to us as what underlies, and in some sense justifies, the artifice and theatricality. Qualms aside, Antic Disposition deliver their performance with passion and panache, deftly steering away from the self-indulgence productions of this self-consciously theatrical sort commonly slip into.

Their extensive additions of music feed the sense of theatricality. Sometimes deployed too liberally and with mixed results–the powerful image of the traumatised soldier, whose cries rang out through the silence, was cut short and diverted by one of these songs; in another scene, Mistress Quickly, wonderfully played by Louise Templeton, vividly recounts the harrowing moment she found the dead body of Falstaff, followed this time by a musical number that felt redundant after her powerful words–the best of these songs, however, created some truly necessary and compelling moments: in a scene interrupted by the sound of a mass explosion in the distance, the eerie silence that ensued gradually gave way to a stirring choral piece, a call-to-arms that was imbued with immense hope and passion. This was a moment where it seemed that the characters felt they needed to sing, that words alone were not enough.

Ultimately, the unique blend of intertwining narratives and music put into action in Antic Disposition’s Henry V results in a production that is less a story about King Henry V or the Battle of Agincourt, but rather about war in the theatrical space and theatre on the battleground. Constant reminders of the play’s artifice are layered throughout John Risbero’s elegant, but utilitarian set: speakers are placed in plain sight, props are made of paper bags. For the soldiers, this artifice offers an escapist haven, and for us the production lays bare the consequences of what happens when reality begins to impinge on the stage.