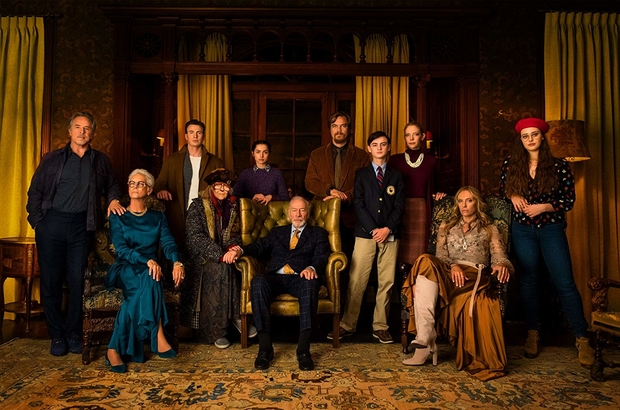 Knives Out is a refreshing, modern and utterly witty whodunnit which reclaims the tired genre and gives it secure twenty-first century recognition. With a star-studded cast, Rian Johnson managed to direct a polished mystery with a plot more intricately woven than Chris Evans’ staple knitted jumper.

The film is centred around the family of Harlan Thrombey (Christopher Plummer), a legendary murder-mystery writer who is found with his throat cut the morning after his eighty-fifth birthday party in his spectral attic study. The case seems to be a clear suicide and the local detectives (played by Lakeith Stanfield and Noah Segan) seek no further investigation. However, an unknown party requests the services of private detective Benoit Blanc, played by Daniel Craig sporting a southern drawl so ironic that Evans (as Ransom Thromby, black sheep and unruly grandson of the victim) mocks him as ‘CSI KFC’ on their first meeting. It is this sustained humour which takes the film from being an homage to the novels of Agatha Christie to a wonderfully spun mystery-comedy. Once Blanc is enlisted and duly suspects foul play, the case is prized open and the Thrombey family is brought in for questioning. With cleverly spliced-together shots of each interview, the five family members are interrogated. It soon becomes obvious that Blanc has a skill for catching lies and conflicting stories so profound that his fame as a private detective earned him an article in the New Yorker.

The extended family consists of a mixture of Harlan’s sons, daughters and grandchildren, who plot against each other so frequently it seems to be the only family trait. Each member represents a modern political subculture, from the ‘woke’ teenage granddaughter (Katherine Langford) to the unapologetically Trumpist son-in-law (Don Johnson). However, all share the trait of being spoiled and are utterly entitled as a result. Benoit begins a trail of the leaf-drenched New England estate and takes on Harlan’s devoted nurse and friend Marta (Ana de Armas) as the Dr Watson to his Sherlock Holmes, because she avoids suspicion due to her inability to lie. Throughout the film, repeated shots which capture the whole family gathered in the lavish living room reminds the audience of the grandeur of the setting, and relays the importance of Harlan’s death.

Everyone in the family has something to gain from Harlan’s death and each story is explored in a seamlessly interwoven plot. This makes the two hours interactive for the audience, who are led to a different conclusion with each new scene. With continued twists along the way, the audience is taken though the maze of Benoit’s thinking as he further unravels the mystery and Ransom Thrombey returns to contribute his own share of suspicious actions.

Knives Out is shrouded in the feel of classic cinema and this is made clear by Sinatra and Sondheim featuring on the soundtrack, although the modern element is encapsulated with flares of hip hop and a cunning score by Nathan Johnson. Its dramatic orchestra is both full of suspense and used as a brilliant tool to assist the crucial monologues and confessions which are central to the plot. The actors have a natural chemistry; together they manage to convincingly create palpable family tension. Johnson’s casting of an iconic ensemble of actors pairs with the meta-cinema of the murder mystery genre to tap into traditional cinematic experience. A clear strength of Johnson’s is that he has the ability to give each family member equal screen time so as not to suggest that some are  more suspicious than others.

This is a film which foresaw its own ‘edge of your seat’ reviews, giving an added sense of irony to a film which seems aware of its clichés. With countless laughs and gasps at the references to recent global events and political undertones which become apparent, you are left questioning whether the whole film is merely a satire of the current political climate. By using a comedic whodunnit to make political statement, Johnson has revealed the growing hilarity that is western politics. Despite this, the offhand references to real-life events such as Trump’s immigration policy of separating children from their parents at the border, can seem facetious. Although Johnson effectively exposes how drastically far away these characters’ lives are from the reality of this policy and others, the film, as a result, also appears too distant from it. As good as its intentions seem to be, Knives Out remains slightly guilty of exploiting grave political issues for comedic value. However, this is a slight fault and film is nonetheless very sharply written. There are mysteries inside mysteries, alibis which become their own stories and plots which compel the audience to watch, eyes fixed to the screen, and wait for the dramatic final reveal.