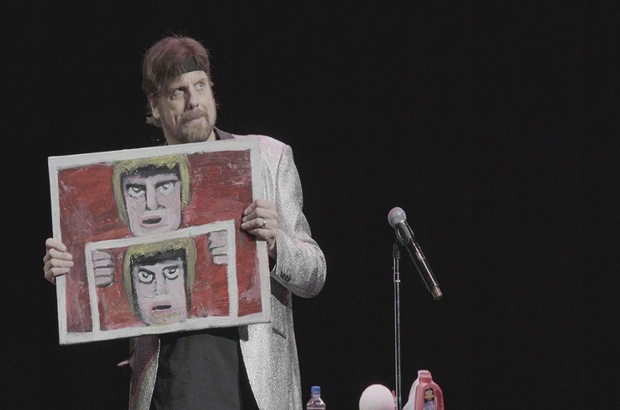 As its title states, the focus of Ben Berman’s documentary began as ‘The Amazing Johnathan’, the stage name of John Szeles, an American magician who gained fame in the 1990s for the bravado, blood and banter in his act. Whether appearing to snort an entire jar of cocaine or by pushing the same plastic straw through (almost) all of his orifices on stage, The Amazing Johnathan inspired the likes of Penn Gillette and Carrot Top – the next generation of Las Vegas magicians-turned-celebrities. In 2014, Johnathan was diagnosed with a terminal heart condition and given one year to live. He decides to embark on a farewell tour: cue documentary crew.

It starts as one has grown to expect this kind of documentary to. We are introduced to Szeles via an external narrator – in this case, an Amazon Alexa – her cold, impersonal voice reverberating off discarded glass pipes and empty Easy Cheese cans. The next thirty minutes of the film proceed in the same enjoyable fashion, juxtaposing videos of Johnathan on stage in his heyday with clips of the now-dying man coughing and spluttering, as he attempts to choke down a grape-sized pill, aptly labelled “the bane of my life”. As for why the meth-addled magician doesn’t simply cut the pill in two and swallow both halves separately, I’ll never know. As in many instances during the film, I find myself simply crediting this nonsensical behaviour to Szeles’ inherently irrational personality.

It is at this point that the narrative switches, or rather, Berman is forced to change it. Szeles  (subtly but smugly relishing in his return to the limelight) makes the shock announcement that he has invited a second “award-winning” documentary crew to film his dying days, seemingly with no remorse or sympathy for Berman, who must find a way to distinguish his own film from the competition. The comedy which ensues from the two crews’ jostling for camera positions at Johnathan’s shows (both evidently frustrated by the other’s presence) is only exacerbated by the revelation that two more, entirely separate documentary makers will also be joining the ever-growing entourage. Berman is faced with a problem: should he abandon six months of work and thousands of hours of filming and planning? Or should he try to find a way to make his work stand out from that of the other three filmmakers, even though they share the same subject? He chooses the latter.

This becomes the documentary’s saving grace. Prior to this, although thoroughly watchable, it becomes clear that there is a deliberate shallowness to Szeles’ character which leaves the narrative stranded. It becomes evident that Berman lacks the journalistic ability to thoroughly challenge his subject at several critical junctures in the film. Yet not for lack of trying, even delving into the dark depths of gonzo-journalism by (allegedly) trying meth with the magician in an attempt to bond with him. After watching the documentary for the first time it appeared to me that the façade Szeles erects was little more than a half-arsed attempt at appearing to be media-trained at the request of his lawyer (to whom he refers throughout the film). Berman’s attempts to probe underneath Szeles’s impersonal veneer  are frustrating. The sad, glazed-over look in the magician’s eyes does little to hide the emotion and worldly contemplation which is evidently behind them. However, whether the lack of trust between the two is the result of Szeles’ distrust of the media or of Berman’s failure to present himself as someone in whom Johnathan can confide is a question left up to the audience to answer. In a Q+A session after the first screening of the film in London, Berman remarks “I don’t know if he ever truly opened up, or if I got him opening up and it wasn’t all that good? I don’t know.” Whatever the case may be, it makes for very interesting watching, and this uncertainty ultimately manifests itself in a dramatic climax with Berman sitting Szeles down and asking him directly whether he is faking his illness.

Unable to find a satisfying conclusion for his film, Berman’s narrative meanders on, despite an increasingly unresponsive Johnathan who shows no sign of dying anytime soon,  having outlived his original prognosis by several years. We begin to get to know Berman himself, who, between sporadic calls and meetings with Johnathan, gives his audience insight into his own personal life where his subject fails to do so. He contemplates the morality of documentary making and of his own actions: perhaps Szeles is right to have a natural distrust of those who heard the news of his illness, flocked in their masses to document it and now circle like vultures to capture it on camera. Wandering from state to state, Berman ponders whether his emotional detachment surrounding death derives from his mother’s own passing. In an interview with My First Shoot Berman admits “I wasn’t okay with it, but it just didn’t hit me.” I spoke to Berman myself via Instagram and asked him whether he believed closure to be a cohesive motif of his film, to which he politely replied, “sounds like a good accurate theme to take from the doc”.

The remainder of the film is intercut with clips of several prominent figures in the entertainment industry reacting to the documentary: although the snippets of an incredulous “Weird Al” Yankovic and Eric Andre are humorous, I believe they distract the audience from the action rather than adding to it. However, Berman’s decision to pursue and interview the director of the third documentary (a man we are previously introduced to as Chad), who we find out is really “Mad Chad” – the chainsaw juggler turned part-time filmmaker, hilariously encapsulates the sheer lunacy of the entire movie.

By the end I’m not convinced we ever really meet Johnathan, we never even meet ‘The Amazing Johnathan’; instead, we must settle for a man who toys with the idea of both personas, but never fully delivers either of them. Despite being worn down by years of disease and drug use, this is someone who desperately wants to leave a legacy which isn’t a rotting billboard on an abandoned stretch of a Las Vegas highway, and in the final scene of the film he does so. In a a moment of tragicomedy, Szeles is told that award-winning producer Simon Chinn has, on request of Berman, unexpectedly lent his name to the film’s credits. Prior to this, Szeles was supposedly under the impression that Chinn was a part of his second documentary crew; whether he knowingly lies about this or not is another one of the magician’s mysteries. Having Chinn as the namesake executive producer of his own documentary almost becomes a symbol for Szeles’ own integrity. Thus, he takes it as a personal victory when Berman makes fiction into fact. So, Johnathan hums back into his mother’s 90th birthday party on his mobility scooter, parks it next to hers and proceeds to announce the news. Unsurprisingly, he fails to mention that the extent of Chinn’s involvement in the film is a short interview with Berman in which he was asked permission to use his name. Yet here, if only for a brief moment, Szeles cements his legacy in front of his friends and family. The lyrics “Something big is what I’m living for” fade in as the credits roll.

Ultimately, ‘The Amazing Johnathan Documentary’ flourishes more as a film about the ethics of documentary-making than as a biography of a man in the twilight of his career, and possibly his life. It generates more questions than it answers and while several critics are left frustrated as a result of this, it spurs me to ask these questions of my own life. Aren’t we all chasing the nostalgic haze of our ‘Amazing Johnathan’ years?

Press tickets for ‘The Amazing Johnathan Documentary’ were provided by The Bertha DocHouse in Bloomsbury. Find their current listings here: https://dochouse.org/cinema/screenings/