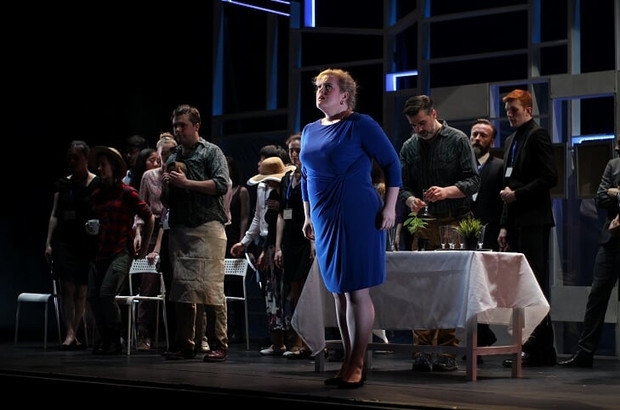 University College Opera masterfully presented the British premiere of Bedřich Smetana’s 1872 opera, Libuše, at the newly refurbished Bloomsbury Theatre. As is traditional for the company, the cast and orchestra both consisted of a mix of students and professionals, adding a professionalism which some other university performances may lack. It did, however, have the less fortunate secondary effect of making the students in business dress look a little like they were on a spring week placement, rather than the directors and board of an unnamed Big Four firm.

Anyone even slightly familiar with Smetana’s opera might be wondering what corporate law has to do with Princess Libuše (Kirstin Sharpin) and her medieval court — and justifiably so. Under the direction of Cecilia Stinton, the UCOpera production brought the opera’s brotherly tension and monarchical politics into the modern day, with the Princess having inherited a prestigious law firm from her father and the brothers slotting in as senior partners. Unlike many other attempts to modernise shows written and/or set in the past, this temporal shift really added to the production.

It helped that it was more than just a change of costume, as Holly Muir’s minimalist set incorporated the skyscrapers synonymous with the business and financial districts of countless cities, without it being overbearing or too obvious. Flexible enough to become several different settings with relative ease, the bulk of the staging was constructed from bright white grid-like structures, lending a slightly clinical edge to the world of wealth being portrayed. This sterility plays into the initial frustration of Libuše’s romantic passions: she gives her right to choose a husband to the board of directors in order to find the union which would best facilitate the survival of the firm, despite her obvious desire for the object of her youthful passion, Přemysl (Robert Davies).

There might have been deeper social commentary making itself heard here, too; in a world of increasing professional female opportunity, women often feel a corresponding pressure to sacrifice their personal lives in order to prove themselves worthy of standing shoulder to shoulder with their male counterparts. This makes the unity achieved at the opera’s close even more poignant. Given that this was a 138 year-old opera performed in the original Czech, this temporal shift allowed the gender themes of the piece to be surprisingly relevant to its modern audience.

The cast should also be congratulated for their mastery of the Czech language. The diction was clear and fluency maintained throughout, which some prominent singers struggle to achieve even when singing operatic works in their native tongue. The ensemble were spirited and able, remaining engaged with their characters even when in the background of a scene. The characterisation offered by the students playing the feuding brothers Chrudoš and Sťáhlav was excellent, although the latter could have benefited from a little more power in his vocals. Sharpin’s soprano was breathtaking, and Davies’ baritone comfortably commanded the theatre.

The orchestra, under the baton of Charles Peebles, were incredibly skilled. The score is beautiful but by no means easy to effectively realise, with immense variation across the different moods of the onstage action. The musicians, however, handled it with apparent ease and relish, and greatly deserved the rapturous applause with which they were met at the final curtain.

Perhaps the only slight shortfall of the production was the surtitling. Though largely competent, there were moments when it was blank for entire sentences. When this was merely intense repetition of the same, already translated lines it was understandable, but towards the end when Libuše is envisioning the future of her firm and bloodline there didn’t seem to be a viable reason for the breaks. It should be noted however that the lack of translation here did not necessarily detract; the intensity of emotion still shone through and the approximate meaning was discernible from the action onstage. The main confusion is why they chose to surtitle the bulk of the libretto, but not these specific sections.

Overall, however, it was a delight to see Smetana’s work brought into the twenty-first century so capably and in such an innovative fashion. The production’s popularity and praise is well-deserved, and I look forward to seeing what the company devise for their performance next year.