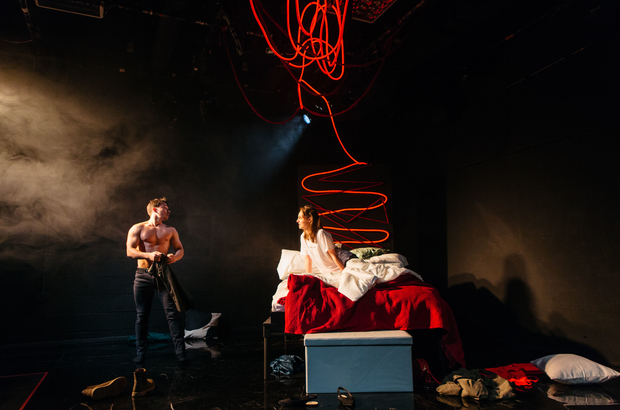 Love Me Now, written by Michelle Barnette and directed by Jamie Armitage presents a frank look at the arena of casual sex. While it displays the complexities of this grey-area relationship, its emphasis is maybe misdirected as the script becomes hooked on its humour. The comedy intertwined with its serious subject matter makes for a nice contrast, but resultantly the play’s statements are never quite stated.

We are introduced to an unnamed couple, A (Alistair Toovey) and B (Helena Wilson) who have a long-term on-off casual-sex set-up. Their relationship makes up the first chunk of the play, with the narrative jumping between a present where they are locked in B’s apartment and past encounters they’ve had. These changes happen seamlessly, facilitated by compelling lighting and sound (designed by Ben Jacobs and Andy Josephs respectively). A burning red neon coil (set design by Fin Redshaw) flickers in correspondence with distorted snippets of past arguments as the actors reposition. The audience is kept fully engaged until sharply snapped back into the scene.

The technical design aptly distinguishes these scenes from one another, but tonally there is little change. A and B’s relationship is overwhelmingly dominated by snide remarks and bickering prevalent in the play’s present as well as in the flashback scenes. Though very funny, with the actors capturing their characters well and timing jokes perfectly, the comedic formula of sarky digs and indignant responses is used relentlessly, to the extent that there is little character development. There is also a consistently angry atmosphere – why the pair continue to sleep together is impossible to understand. Though more shocking moments do stand out with Armitage’s direction, the characters’ reactions are difficult to trace; they often get disproportionately angry about small insults. At one point, A jumps on the bed screaming that he does not care about B. His acting and physical dynamism certainly show his rage, but why he is particularly angry remains unclear.

Both A and B are entirely unsympathetic, with B as shallow as A is unapologetically and intensely misogynistic. They seem to be pastiches: B as much an archetypal, superficial, yoga-hyped, millennial with lines such as ‘No point doing something if you don’t look good doing it’, as A is a hyperbolised sexist arsehole. Moreover, both of these defining traits are treated in the same way, as the subjects of humour, so much so that it is unclear initially that the sexism B suffers from is indeed the subject of the play – the shock the audience feels towards the problematic duo dilutes that which we experience specifically towards A’s misogyny.

This is a structural problem of the script. In the first section we witness B’s relationship with A; in the second we see her relationship with C (Gianbruno Spena). Where the first lover could be categorised as a ‘lad’ misogynist, saying ‘cheers babe’ as he pulls his trousers on after a blowjob, C is a boring, chivalric romantic-type, comically humourless yet dangerously manipulative. It is only when we get the contrast of these two forms of misogyny that the audience starts to get a grip on what direction the play is taking – before then it is unclear that B is actually the main protagonist, and that the play is more than just an inspection of a dysfunctional relationship. A’s misogyny is designed to invite interrogation; it is not just being satirised for a scornful laugh.

This seems to be what happens in the final section, which is the most dynamic and creative. B relives the episodes where she was victim to A and C’s abuse, analyses their misogyny and answers with sterner responses than her previous playful evasion. The staging here is precise, with A and C retracing their steps and miming earlier scenes, while B circles them and fills in her sections of dialogue. But even here, the script does not allow the sexism to be specifically critiqued. When B looks as spectator on the moment of her sexual assault, she problematically asks ‘How did we get here?’ – it is only after her reliving of the preceding episodes that the play implies the answer is that it was not ‘we’, it was ‘he’, and regardless of how she responded to his abusive treatment, the result would always have been the same.

While Love Me Now explores a complex kind of relationship that operates deliberately in a grey area and astutely exhibits different forms of misogynistic abuse, the way the script is structured unfortunately doesn’t allow for nuanced criticism of A and C’s toxic masculinity. Barnette makes it difficult for us to fully understand B as a character; we do not get an honest exploration of her mindset as shaped by her experiences, but rather a figure who seems entirely two-dimensional and inherently unlikeable. The trauma of her assault is unsettling with A’s haunting presence, yet later her bizarre fantasy of their first night together, preceded by an erotic dance between her and the perpetrator of her assault, presents a complexity that is left untapped. The persistent humour leaves little space to engage with the more interesting questions the script raises, and quite what the play’s stance is is unclear.