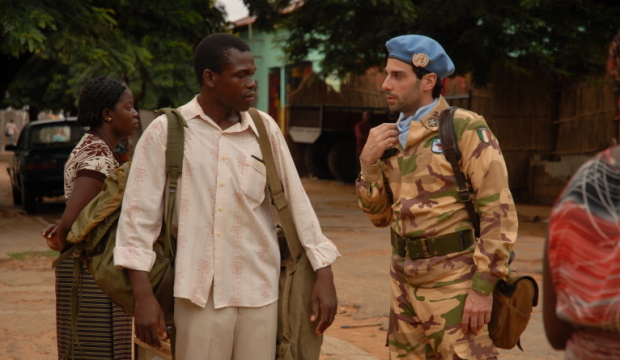 This week SAVAGE is at Film Africa 2015. Here GEORGIE COWAN-TURNER takes a look at a series of films marking the fortieth anniversary of the independence of Lusophone Africa.

All is Well, The Last Flight of the Flamingo and The Roar of the Sea have been brought together by Film Africa to form a special strand of films signalling the fortieth anniversary of independence for the  former Portuguese colonies on the African continent. If you want to watch something uplifting, these are not the right films for you. However all of the films make you question how far these countries have recovered from colonial rule and also how we should treat refugees fleeing from these broken countries.

All is not well in Pocas Pascoal’s film, All is Well, which traces the trials of sisters Alda (Ciomara Morais) and Mara (Cheila Lima) as they try to find a home in Portugal, the land of their ex-masters. Essentially orphans, the two girls stoically fend for themselves while blindly trusting that their mother will eventually join them from war-torn Mozambique. Pascoal sets the film in the Summer of the 1980 and makes glaringly obvious the similarities between the treatment of the sisters by the Portugese and our own treatment of Syrian refugees.

Overall the film is crafted in a sleek and sensitive way. Morais and Lima beautifully capture the nuances of sisterly love and their performances make the film. At times the film’s commitment to exposing the inhumanity of strangers to the sisters does mean it occasionally falls into the trap of cliché. For instance, phrases such as ‘life is unfair’ and ‘this time, I’m the one who’s deciding what to do with my life!’ occasionally pepper the script. Nevertheless I find the use of these clichés adds to the realism of the film – after all, not every line has to be original. Alda and Mara’s story isn’t original: thousands have experienced it before and thousands will continue to experience it.

The Roar of the Sea is testament to this. Ana R. Fernandes and Torsten Truscheit’s short film centres around the story of an anonymous refugee who has travelled to Germany to attempt to find his daughter and ex-wife. The main set is a prison cell, symbolising the Germans’ hostile treatment of the refugee. It is also a place of limbo. This, in addition to the relative shortness of the film, adds to the sense of the refugee’s stay in Germany as being transitory. The roar of the sea is calling to the unknown refugee as he sits in his dark and bare cell, acting as a sombre reminder that he will be on his way before long.

The simplicity of the script and the fact the refugee is unidentified means the film functions perfectly as an allegory for how refugees lose their identity when they abandon their country. This loss of identity means they find it impossible to be absorbed into a new culture. The film has an apposite soundtrack which is used to particular effect when the soft and soulful voice of the refugee’s ex-wife plays as her ex-husband is being violently deported from the country. It’s a song about the destruction of his home country. It reminds us of what he has lost – his wife and daughter – as well as the worrying future ahead for him when he returns home.

The Last Flight of the Flamingo is a very different film to the others. An adaptation of Mia Couto’s popular novel, director Joao Ribeiro captures the weirdness of this work which is at times comic and at others disturbing. A mutilation in the first scene is a mixture of the bizarre and everyday; the camera focuses in on an intact penis and then pans out to a crowd of inhabitants from Tizangara who seem extraordinarily undisturbed by the clear evidence of mutilation before them.

Tizangara, Mozambique is a land in which ‘not everything is what it seems’. The idiosyncrasies of the film made me conscious of the foreignness of their culture to my own. Like the protagonist Massimo Risi, an Italian lieutenant investigating the disappearances of five united nations soldiers, we need a translation of the culture as much as the language.

Mozambique is a living paradox. The characters are vibrant and vivacious, yet they are living in the land of the dead. Childhood innocence and youth cannot be found in the country. There are shots of Massimo walking through deserted parts of the town, with graffiti such as ‘only children never wither’ scratched onto crumbling walls. Ribeiro uses the fate of Temporina, a young woman cursed with the appearance of an old woman, as a symbol for the entire country which has become aged and withered by the suffering it has endured. The mutilated genitals are a grotesque symbol for how the country is struggling to be reborn out of the ashes of its colonial past.

Unlike The Roar of the Sea and All is Well, the crafting of The Last Flight of the Flamingo is not always sophisticated. At times I could find fault with the acting. Yet it’s a gruelling watch and the film’s absurdity makes us question the absurdity of the situation.

Film Africa 2015 is running in cinemas across London until 8th November. You can take a look at the programme here.