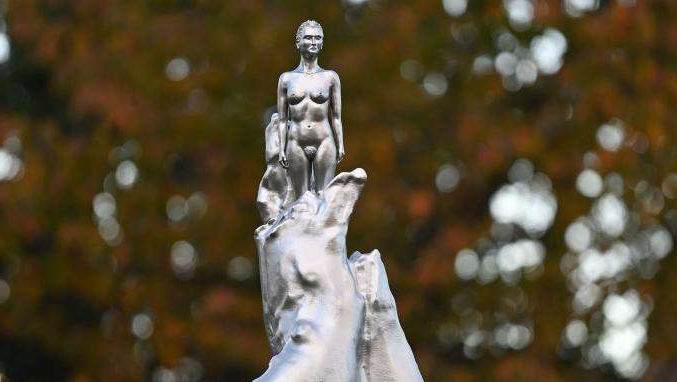 ANNA DANG contemplates whether Maggi Hambling’s new statue of Mary Wollstonecraft does justice to the writer and activist’s legacy.

London is a city that remembers and celebrates its history. It seems that every public square displays either a bust, a plaque, or a fully-fledged statue in homage to a venerable figure. The stony eyes of Winston Churchill overlook Parliament Square as if he were still watching over his former turf. Admiral Nelson stands proudly on top of his column in Trafalgar Square. In Tavistock Square Gardens, mere steps away from UCL, a bronze bust of Virginia Woolf is one of the relatively few sculptures of women in London.

In my hours of daydreaming, I’ve found myself wondering what would happen if all the sculptures of London came alive at night. I wonder if they’d walk across the modern city, keen to leave their footprints on the streets as a reminder of their larger-than-life presence.

A few weeks ago, a newcomer joined the ranks of this army of bronze and stone. A park in Newington Green unveiled what looks like a towering wave of silver-plated granite, surmounted by a diminutive nude woman. There she stands, lithe yet curvaceous, a tiny sprite newly sprung from the seafoam. Her glossy skin evokes the smoothness of freshly-shaved legs. Her elfin face seems to bear a slight pout. Is this a statue of Aphrodite, the sea-born goddess of beauty? Or is it perhaps her cousin Artemis, lunar goddess of chastity?

No. This delicate sculpture is not a monument to any member of the Greek pantheon: she was erected in honour of Mary Wollstonecraft, the eighteenth-century author of A Vindication of the Rights of Woman, a radical advocate for gender equality and, arguably, the mother of feminism.

Most people were thrilled by the thought of a statue honouring Mary Wollstonecraft. Considering the sheer scope of her literary and political legacy, this commemoration was long overdue. Few, however, were pleased with the end result. Soon after the unveiling, critics took to social media, accusing  the statue of objectifying women with its nudity and sexiness. ‘I, for one, am loving the new Mary Wollstonecraft statue. I had no idea Mary had shredded abs or bouffant pubes’ remarked twitter user Whores of Yore. Author Caitlin Moran expressed similar ‘praise’ in her tweet:

This is the new statue of Mary Wollstonecraft. It’s not making me angry in any way because I just KNOW the streets will soon be full of statues depicting John Locke’s shiny testicles, Nelson Mandela’s proud penis, and Descartes’ adorable arse.

The sculptor, Maggi Hambling, was well aware that the real Wollstonecraft didn’t look like a Victoria’s Secret model. According to her, the critics had ‘missed the point’. The statue was never supposed to represent Wollstonecraft herself; instead, it symbolised the ‘idea’ of the feminist movement and the ‘Everywoman’ that had risen from it.

This clarification arguably makes the sculpture slightly less bizarre, but it also redirects our focus to a perhaps no less loaded question: is it alright to objectify the female body if it’s in the service of a lofty ideal?

Whenever I think about this question, I find myself remembering Merchant Ivory’s film adaptation of Henry James’ novel, The Bostonians. In one scene, the Civil War veteran Basil Ransom meets Verena, a charismatic public speaker for the Women’s Rights Movement. As Basil gazes at Verena, his friend says, ‘Oh, what a load of bollocks she says!’ ‘Yes,’ Basil replies dreamily, ‘but how pretty she looks as she says it!’

I was watching the film with a male classmate of mine, and couldn’t help rolling my eyes at Basil’s comment. My classmate chuckled tersely and asked, ‘What? He’s not allowed to find her attractive?’

Of course he was allowed to find her attractive. In fact, Basil found her so attractive – despite her silly ideas on suffrage – that he eventually married her and forbade her to pursue a political career. Attraction isn’t and has never been the main issue. No one can stop you from lusting after a sculpture dedicated to Mary Wollstonecraft (as long as you’re not being publicly indecent about it). There’s nothing wrong with appreciating the female form – unless it comes at the price of women’s freedom of expression, political rights or human dignity. One cannot, in good faith, admire the picture and remain deaf to the message. In art, one can choose to overlook content for form. But despite what several male poets have been attesting for centuries, women are not works of art.

The French symbolist Charles Baudelaire, for instance, is infamous for his objectification of women. He adored them – as long as they were ethereal martyrs, tender Madonnas or stern muses. Once the symbol reduced itself to flesh and blood, he cared little for what they had to say:

As terrible and incommunicable as the Deity (with this difference, that the Infinite does not communicate because it would thereby blind and overwhelm the finite, whereas the creature of whom we are speaking is perhaps only incomprehensible because it has nothing to communicate).

For Baudelaire, as for many men, the drive to worship allegorical women was directly proportional to his cold indifference towards the real thing. Almost a century earlier, Mary Wollstonecraft noticed a similar parallel in the attitude of noblemen towards ladies:

Experience should teach (women) that the men who pride themselves on the scrupulous exactness with which they pay this insolent respect to the sex are the ones who are most inclined to tyrannise over and despise the very weakness they cherish.

In other words, the greater their adoration for the image of woman – composed of a thousand silly graces and charms – the deeper their disdain for the reality of her. For Wollstonecraft, most so-called ‘womanly charms’ were a sign of weakness resulting from lack of education; instead of the power to charm through beauty, she demanded mutual respect and intellectual freedom.

If we squint, we might be able to find a faint trace of this determination in the stern-looking face of Hambling’s sculpture – even though the rigid pose of her shoulders feels closer to ‘runway model’ than ‘steadfast activist’.

But Maggi Hambling is a woman, some might object. Surely she couldn’t participate in the long-established male tradition of erasing the woman behind the symbol?

However, being a woman doesn’t automatically make one a feminist, just as being a feminist doesn’t exempt one from making mistakes. As far as erasing the woman goes, the sculpture speaks for itself: it reveals that Hambling, far more than her critics, has ‘missed the point’. By choosing to represent feminism as a hot, naked lady, she has given us a work of art that feels at best comically outdated and, at worst, blatantly insulting.

Everything about the sculpture – from its silver tint to the wave-like column evoking Botticelli’s Birth of Venus – screams delicacy, softness, grace and refinement. These are the very things that Mary Wollstonecraft railed against: the things she identified as obstacles to the emancipation of women.

Taught from infancy that beauty is woman’s sceptre, the mind shapes itself to the body, and roaming round its gilt cage, only seeks to adorn its prison.

The woman who wrote these words was honoured by a nude barbie doll-like statue. For many of Wollstonecraft’s fans, this feels like a slap in the face.

‘Clothes would have restricted her’, Hambling said in response to widespread backlash on the nudity of her sculpture. ‘Statues in historic costume look like they belong to history because of their clothes. […] The sculpture is for now’. Hambling seems to have forgotten that bodies, too, can belie their times. To her credit, the sculpture does feel very timely: but it does a much better job of representing contemporary beauty standards than of conveying the ideas and legacy of Mary Wollstonecraft.

With this pint-sized, perfectly polished body, Hambling reasserts the woman’s status as a spectacle; a pretty object to be seen, instead of a rational subject which should be heard. In contrast to Wollstonecraft’s boldness, the sculpture’s svelte (almost frail) appearance seems to reduce the feminist movement to something unthreatening and harmless.

If the statues of London do come alive at night, they need not fear an uproar from the newly unveiled sculpture in honour of Mary Wollstonecraft. The ‘Everywoman’ that rose from her revolutionary work is apparently no more than a graceful Tinkerbell look-alike. If the little fairy dares to walk across the capital at all, rest assured she will leave behind no more than a dainty set of footprints, pretty as can be, quickly erased by the more imposing soles of Churchill, Nelson and countless other men of bronze.