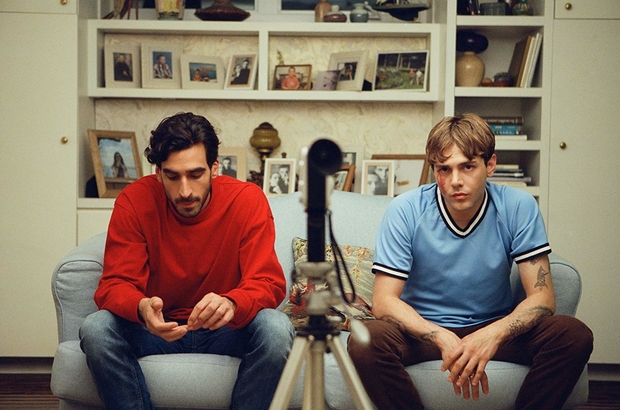 Xavier Dolan’s eighth film readopts many of the themes highlighted in his former works (Mommy, 2014, Laurence Anyways, 2012): the question of identity and sexuality, complicated mother-son relationships, and, most importantly, friendship. Yet, the repetition of these recurrent themes does not render their depiction any less sincere and raw.

The film starts with a group of male friends in their early thirties spending the weekend together in a cottage by a lake in Québec. Erika, the sister of one of the friends, is directing a short movie for her film studies and needs two actors. Matthias and Maxime, close friends since childhood, reluctantly agree to help her without knowing that the scene requires that they share a kiss. After initially reacting with shock upon receiving instruction of this stage direction, they awkwardly assure Erika that the kiss does not pose a problem. They are unaware that this kiss will change their lives.

The audience is prevented from seeing the kiss by a pitch black screen just as it is about to happen. The silence afterwards makes us wonder what has happened, the audience is left just as confused as Matt. His sudden sense of identity loss is depicted in a strongly metaphorical scene as he gets lost swimming in the lake. Maxime, played by Dolan, is preparing for his departure to Australia where he will travel around and work as a bartender for two years; Matthias (Gabriel d’Almeida Freitas) is working for a prestigious law firm and has a long-term girlfriend. The decisive scene takes place just a few weeks before Maxime’s departure and changes the friendship dynamic between the two entirely.

Whilst, at the start, Matt and Max are very comfortable with one another and do not leave each other’s side, after the kiss they begin to act awkwardly and start to ignore each other. They avoid the other’s gaze and pretend not to care about the disregard of the other. The relationship becomes an observational one; the audience sees Max the way Matt sees him, observes him in moments where he feels unobserved. The two friends are presented as newfound strangers as they begin to notice and discover little features about each other they had been unable to see before. The audience, itself a stranger to the two men, takes part in this intimate and subtle discovery. It is those small glances and smiles that constitute the tenderness and sincerity of Dolan’s film.

Although the film features a lot of fast-paced, sharp, and funny dialogue, its central theme is the lack of communication between its main characters. There is a yearning for understanding, a search for identity and answers, and at the same time an enormous fear to discover the truth about oneself and the other. This indecisiveness and inner conflict are especially embodied by Matt, looking behind formerly closed doors, then running away from what he finds on the other side of them.

The lack of communication is present in the whole friendship group. They talk a lot, they joke a lot, but they never so much as graze any non-superficial subject. Instead, they show their empathy through gestures: a reassuring hand on the shoulder, a short pat on the knee. Dolan affectionately portrays male friendship with all its particularities and difficulties, inspired by his actual group of friends. The most authentic scene is probably the one in which the friends are singing ‘J’ai cherché’ by Amir in the car, a fun performance which nevertheless seems to carry some earnestness to be found in the lyrics. ‘You gave me the desire to be myself, gave a meaning to my ‘whys’ (…) You’re the one that’s making me strong’, they sing, pointing at each other, seemingly joking but perhaps subconsciously feeling this way.

Critics have pointed out the lack of strong female characters in the film, some having even gone as far as calling its depiction of women misogynistic. Those critics ignore the fact that it is the female characters in the movie who are pushing the men to discover and understand themselves. Although Erika’s character is caricatured, mocking the social media generation, it is her movie and her understanding of fluid gender and sexuality (although even this attitude is presented in an exaggerated way which makes it seem comical) that pushes the main characters to discover themselves. Matt’s girlfriend is the one driving him to the party, the setting of a decisive scene, and pushing him to be honest to himself and kind to others. It is Matt’s mother who understands Max’s pain and tries to talk sense into her son. The women are the only characters in the movie who properly communicate. They might seem naïve at first sight, but they are the contrary. They are kind and generous, and they help the male characters to discover what they feel, sometimes very subtly, sometimes with brutal sarcasm. The female roles bring about change. And they do so selflessly, without expecting to get anything back.

It is also worth mentioning the strong score of the film, featuring a diverse genres. Evocative piano arrangements by Jean-Michel Blais during calm scenes alternate with 60s and 70s Soul and Jazz (Nina Simone, Al Green) and contemporary pop and rock music, for example by Half Moon Run from Montréal. This is not the only reference to Canada: the whole film can be viewed as an ode to Québec, Dolan’s home. In particular, the film’s opening features beautiful landscape shots of Canada’s autumnal forests and lakes. All the characters speak French in the strong Québec accent and mock Erika who speaks a mix of a French accent and English. The strong connection of Dolan to Canada and the feeling of home which is tied to the movie is palpable.

The amount of personal elements Dolan incorporated in the film – himself as actor, his friends, his home, his language – might be an indication that the movie is somewhat autobiographical. Although the parallel between Erika as director and Dolan himself might be a bit far-fetched, the movie does illustrate how art can change and influence identities. There is a strong possibility that Dolan’s own movies have had a strong influence on his friends’ identities as well. ‘We all have very different lives compared to the ones of our characters in the film. But it is indeed the DNA of our group,’ confirms Dolan in an interview. ‘What you see on the screen with this group of friends, that’s what happens in my kitchen.’ He thus considers Matthias et Maxime the most intimate of his movies.

Dolan’s performance is outstanding. Acting brilliantly with his voice, he transforms a seemingly banal scene in which he is spelling out his e-mail address to an assistant on the phone into one depicting a great vulnerability and hurt. Both Dolan and D’Almeida Freitas succeed at authentically portraying intense desire and violent love, but also hesitation, fear and suppressed feelings. There is a certain universality in the theme of pushing the other away because of fear of the intensity of emotions, and, even more crucially, of the meaning of these emotions for one’s identity. “This is not who we are”, says Matt. “I need to understand”, says Max. But it is the unsaid, the glances, the hesitations, the metaphorical pictures, which carry the greatest importance in the film.