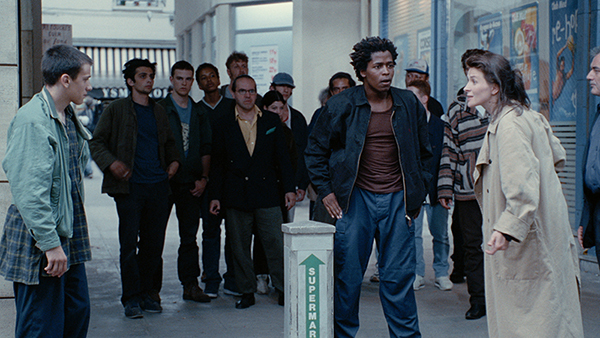 Mainstream cinema tries to feed you the idea that there are solutions, but that’s bullshit. You can make a lot of money with these lies. But if you take the viewer seriously, as your partner, the only thing you can do is ask questions more strongly – Michael Haneke

Code Unknown is Michael Haneke’s first venture into French film; set in Paris with a French script and actress Juliette Binoche. Drawn in by Binoche’s presence, audiences will encounter a film that will question their views on the nature of reality, their positionality and their ability to co-create a film as a spectator who is taken seriously.

On first viewing, Code Unknown can either leave the audience in a state of profound reflection or sheer indifference. Indeed, the film’s limited dialogue, which is often offlaid in a brusque manner, results in a narrative which is deliberately incoherent. The film’s aesthetics are also no more formally interesting than those in Haneke’s earlier films. That being said, there is a great deal of action. Through fragmentation Haneke disrupts the viewer’s sense of the possibility of a complete reality, with a narrative that splinters a set of different yet loosely interrelated storylines from the film’s opening scene.

On a busy Parisian boulevard, we meet Jean (Alexander Hamidi), a frustrated countryside teenager walking down a street. He tosses a paper bag he had been carrying onto the lap of a street beggar, a Romanian woman named Maria (Crenguta Hariton). At this point, Amadou (Ona Yu Lenke), a young Black man, catches up with Jean, who has walked away, and confronts him. He asks Jean to apologise to Maria. Jean refuses, prompting Amadou to thrust him towards Maria. Jean’s second refusal to apologise triggers a fight between the two men, as an observing crowd surrounds them and the police are called. Racially profiled by the police, Amadou is arrested and Jean is left free. From this moment onward, the film expands its dramatic characters to a larger and more diverse set, whose individual narratives are only loosely linked.

Through this opening confrontation between Amadou and Jean, Haneke demonstrates that inhabiting the same space can have radically different implications for the personal lives of the various characters – a motif he explores throughout the film. The multiple narratives that emerge from this point of departure survey the lives of those associated with the event. In exploring the characters’ relation to a larger fragmented reality, Haneke leads the viewer on a similar path of exploring their own relationship to the fragmented world they are part of. He asks spectators to “look for their own responses, wherever they are” and for those responses to “come from within…only that can give them a good conscience”.

Such responses can be compelled by the fragmentary aesthetic whose incomplete reality and storylines ask the viewer to pursue their own interpretation. Some critics, namely Peter Brunette, point to philosopher Jacques Derrida as influencing Haneke’s use of fragmentation. In Limited Inc (1988), Derrida observes that all meaning is determined by context. But, as context cannot be completely known, meaning is always indeterminate. Brunette notes that Haneke is illustrating this inability to determine meaning with cinematic images. Haneke himself states:

Every kind of explanation is just there to make you feel better, and at the same time it’s a lie. It’s a lie to calm you, because the real explanation is so complex, it would be impossible to have in 90 minutes of film or 200 pages of a novel.

At its heart, Code Unknown’s fragmentation is an attempt to fashion a counter cinema that values the spectator and a revelation of Haneke’s honesty.  From his point of view, films can never show reality, so the only honest way to proceed is fragmentation. Only a shattered art can honestly reflect the shattered reality of contemporary life. By withholding narrative information, Haneke ultimately conspires to provide a clarifying distance that transforms the viewer from simple consumer to active evaluator. As Haneke remarks, “I give the spectator the possibility of identifying … I say to him or her: stop a little bit with the emotional stuff and you’ll be able to see better”.