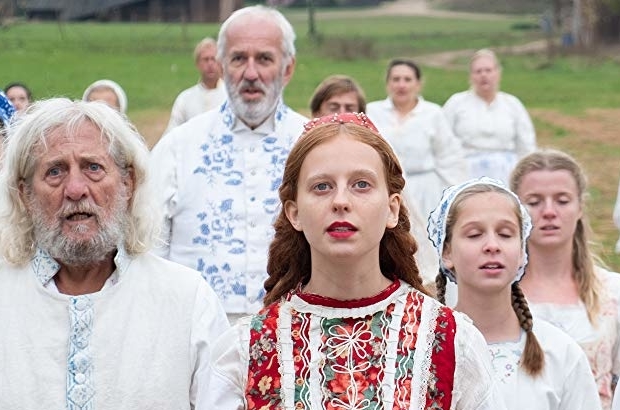 Were it not for its overt title, the gloomy snow-filled landscapes that open Midsommar might tempt us into thinking that the shadows and darkness typical of the horror genre will envelop the film. What instead emerge are verdant fields, flowing robes and the midnight sun – this is to be a markedly different iteration of chilling disquiet.

Indeed, Midsommar shouldn’t really be categorised as a horror film – the pre-film trailer for the sequel to It had me fearfully averting my gaze from the screen more often than the main event’s 147 minutes. It does have its fair share of violence and gore, but this is very much slow-burning psychological tension as opposed to jump-from-your-seat slasher action. Aster himself has said it is a ‘breakup movie’ and this definition feels appropriate. It is a vulnerable relationship that frames the narrative, and which, through its interplay with all the strange goings-on, does much to drive character development.

Midsommar sees student Dani (Florence Pugh) tag herself, in rather unsolicited fashion, onto boyfriend Christian’s (Jack Raynor) trip to rural Sweden with his fellow PhD anthropologist friends. There are academic motivations behind the expedition, but for Dani, who is in the aftermath of a grim family tragedy, this is more a desperate attempt to cling onto the only meaningful relationship she has left. The impromptu opportunity to paper over the cracks comes in the form of the 9-day-long ‘midsommar’ festivities.

Midsummer is a celebration of the summer solstice observed by a variety of cultures, and an especially important occasion in Sweden, where the ‘midsommar’ festivities are a grand occasion for being with family and friends. While the precise nature of the inevitable departure from this normality remains unclear, through clever camerawork and unsettling transitions, director Ari Aster deftly suggests the descent into delirium that is to come.

From beginning to end, Dani flies between emotional extremities and Florence Pugh superbly delivers a powerful portrayal of a woman whose intense grief amalgamates with a psychedelic sensory discord, which is triggered from the moment she takes her first sip of tea laced with hallucinogens. From intensely choreographed choral screaming to serene enchantment, her performance is the backbone of several of Midsommar’s most memorable acts.

Christian’s position as reluctant fault line between his girlfriend and his friends is well executed by Jack Raynor, who impressively handles certain scenes that are exotic, to put it mildly. Also noteworthy is Will Poulter’s fine performance as Mark, Christian’s obnoxious, vape-wielding bro-friend. His character is key to much of the film’s unexpected, yet welcome comedic undertone.

While Dani, Christian and Mark are amongst the characters whose storylines unfold and conclude well, others are rather underdeveloped and frequently seem to be hastily disposed of. For example, British tourist couple Connie (Ellora Torchia) and Simon (Archie Madekwe) seem like unnecessary additions and they add nothing in terms of action and emotion not already offered by the American group. Meanwhile, tensions brew between Josh (William Jackson Harper) and Christian, before the former is removed from the film rather too abruptly for their conflict to provide any real contribution.

These minor frustrations can leave you slightly dissatisfied, and with the film’s propensity to meander (as well as the fact it already pushes two and a half hours), it probably would have been for the best had some details been trimmed. It is also worth mentioning, however, that the meandering itself is far from boring. The kaleidoscopic visions of nature as seen through the slowly disintegrating travellers coalesce unnervingly with an excellent score by Bobby Krlic (whose stage name is The Haxan Cloak) replete with eerie strings and ominous drum beats. These elements amplify the impression throughout that the ostensibly pleasant environment is masking something far more sinister beneath.

Cultish rituals as numerous as they are bizarre, an idyllic setting with creepily saccharine inhabitants, and the careful construction of an ominous atmosphere mean the comparisons being made between Midsommar and Robin Hardy’s 1973 The Wicker Man are both inevitable and appropriate. While the former suffers from lacking the robust plot of the latter, there’s no doubting its successful delivery, to a new generation of filmgoers, of that same feeling of being caught in a situation where the longer you remain, the more desperately out of place you realise you truly are.