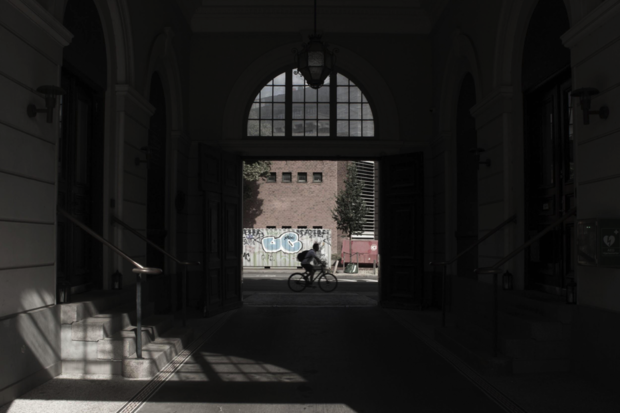 A prose piece by SELIN BENGI

Two strangers walking together amongst hundreds of thousands of people in a foreign city. Even surrounded by a sea of strangers, the two were still barely familiar to one another. After all, it had only been two weeks since they’d started seeing each other.

It was just a few days ago that he had asked Margaret if he could join her on the holiday she had planned for herself. Caught completely off guard, Margaret struggled to respond to his question. She had never been on holiday with someone she was seeing before. In fact, her relationship with him, if you could even call it that, was the most serious she had ever experienced. Her long list of criteria for in a romantic partner and her nagging practical brain had kept her from seeing anyone for more than two or three dates. Yet here she was, confronted with a proposal that might require her to spend four whole days with this almost-stranger. Thinking about it sent chills down Margaret’s spine; whether tremors of horror or excitement she was not sure. Did she want to take him with her on the solo journey she had planned for herself? Was she willing to sacrifice her oh-so-precious alone time for this boy?

More importantly, would her traditional parents even let her go away with a male companion? How would she tell them? Lying was always an option yet whenever she had resorted to this method, things had not ended well. As an only child, the pearl of the household, she could perhaps cajole her parents into considering this  proposal. They were supportive of any interaction Margaret had with people as they thought they had deprived her of companionship by not giving her any siblings. Since her childhood, Margaret had spent a lot of time by herself and was fiercely independent. It was revolutionary that she was even considering sharing her time with someone else, not just for a few hours but for several days on end!

The one thing Margaret loved more than alone time was getting to know herself. She enjoyed putting herself in unfamiliar situations and testing out her theories about herself. Like a scientist, she would mentally record her own responses to changing circumstances. That was the main reason she had started dating anyway. Accepting the boy’s offer would mean throwing herself into something completely unknown to her. Now that was thrilling: a fresh opportunity for a new experiment on herself, to understand herself better.

She wasn’t sure there was much to know about the boy; she found him a bit boring and shallow. He kept telling Margaret how she, at nineteen, had taught him so much, a twenty-four year old graduate with a full-time job. Margaret’s main motivation for taking him with her would be the unexplored physical aspect of their relationship. He and Margaret had shared their first kiss only a week ago on a bench in a tiny pocket park in the city. Even at this perfectly secluded location on a beautiful summer night, when both of them were in a blissful state of tipsiness, their kiss was nothing to rave about. Margaret had waited and signalled for a kiss all night, yet the timid boy only gathered the courage to make a move upon Margaret’s derogatory comment, ‘You’re shy when it comes to physical stuff aren’t you?’

When their lips finally touched, Margaret was partially distracted by the big bony hands on her cheeks. The boy had just been to the bathroom in the cafe close by and all she could think about was whether the strange skin touching her face was clean or not. To make things even worse, he pulled away for a second and uttered the words, ‘You’re thinking ‘he’s such a bad kisser’ aren’t you?’ Lacking the motivation to praise the boy, Margaret kissed him again. They were kissing alright, but Margaret just couldn’t get herself to close her eyes and enjoy the sensation. Her eyelids rejected her command to keep shut, rolling up every time she tried to control them. Her gaze was fixed on his porous skin with little follicles of hair sticking out. The beige sea with floating black sticks kept undulating rhythmically, creasing then straightening again and again. At least she was finally kissing a boy, she thought, it had been far too long since her last prey. It didn’t matter who she was kissing, she just appreciated the feeling of physical intimacy. The comfort she got out of relieving some of her built-up lust was so satisfying, it even gave her the illusion that perhaps he was not that dull, maybe he could become her boyfriend if they both opened up a bit more.

It only took a few days for Margaret to realise the absurdity of her hopes about the boy.

Now they were in this unknown city together, aimlessly walking across town. They passed through the crowded centre and reached the empty residential streets. The deeper they descended into the quiet neighbourhoods, the more ordinary their surroundings became: low-rise concrete block apartments lined up along a now abandoned main road leading into the glowing city centre behind. A particular office block caught Margaret’s attention. She strolled into the alleyway, with him following her, and stopped right in front of the tall metal gates shielding the block. Plastered across the side of the building was a peculiar phrase in massive letters: ‘Standard Life.’ How demoralising would it be, she thought, to encounter this phrase every single day going to work. A sore reminder of the mediocre life the employees were leading. A boring old standard life was surely the last thing she wanted for herself. While scornfully laughing at the phrase, she noticed the boy staring at her lips. He dove like an eagle towards her. The kiss was inevitable. Out of all the spots in this whole city, had he really chosen this one to kiss her? In front of a shrine to the ordinary? Margaret was not going to conform to a ‘Standard Life’, she would not surrender to normality. She was done with him.