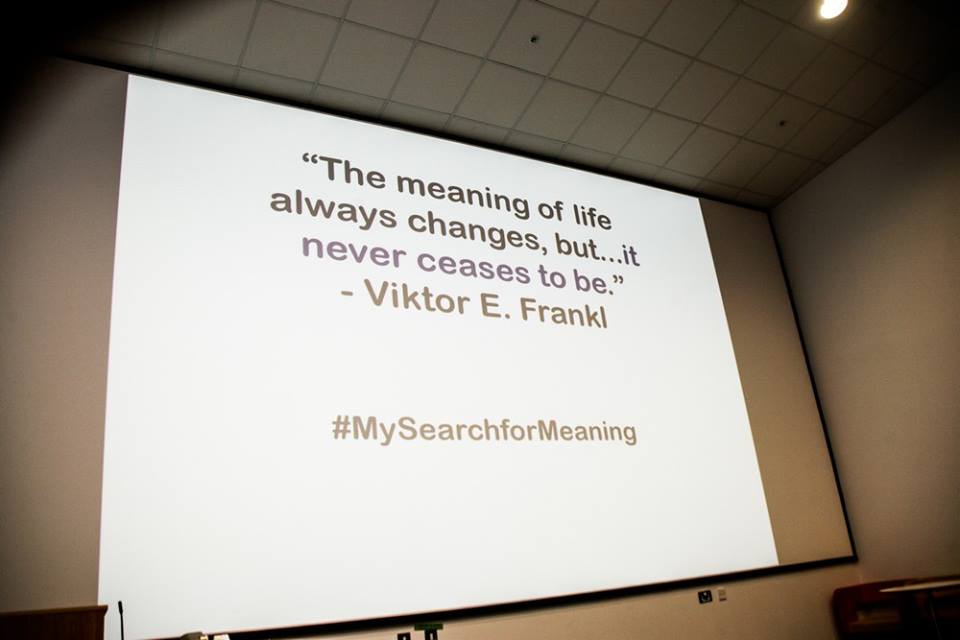 RYAN MCMEEKIN explores the creative power of spoken word in his review of ‘My Search For Meaning’.

The power of language has always appealed to social minorities. However marginalised, forgotten, or abused, reading and writing have stood, and continue to stand, as two of the most accessible forms of expression for those otherwise excluded from wider public discourse. Spoken word is a genre that has particularly strong associations with the struggle for social inclusion. Emerging from the poetry of the 1920s Harlem Renaissance and the Beat Generation of the mid-twentieth century, it is a genre that has always been concerned with matters of race, sexual liberation, censorship, and the afflictions of modern society at large.

These issues remain just as, if not more, problematic in the twenty-first century. Accordingly there has been a noticeable surge in interest, especially in the UK and especially amongst youth, for spoken word, a mode of writing and performance that can succinctly articulate the grievances of an increasingly stressed social fabric. New issues too, such as immigration, have gradually found their expression in poetry; in December 2015, The Guardian published a video, Immig-Rants, which saw four prominent poets speak out in defence of immigration. Spoken word is fast becoming the mouthpiece for a generation consumed by issues of class, tolerance, and the limits of freedom.

Though the poems were performed by prominent British and American spoken word artists, each of the readings was interspersed with recorded extracts from the prisoners themselves. Perhaps wrongfully, it is easy to exclude prisoners from our conceptions of ‘normal’ society, yet hearing their voices immediately broke down the boundary between ‘us’ and ‘them’ with surprising ease. Poetry united prisoner and audience, reiterating the idea that, whether incarcerated or not, creativity holds a position as a communal and inalienable human right.

The performers not only read the works written by prisoners, but also presented some of their own pieces. Adam Kammerling, for instance, performed his piece ‘Red Phone Boxes’, an elegy to Britain’s decayed and decaying history, whilst Joshua Idehen read his comic, yet profoundly lyrical, ‘My Love’. Undoubtedly, the prisoners’ pieces were less practiced, yet this is not to say that they were any less insightful. What they lacked in rhythm, rhyme, and style was more than compensated in their pure, unadulterated exploration of what it means to ‘live’ and to find ‘meaning’ within life.

This was the common interest of all of the prisoners’ writing: the search for meaning. Though ranging in focus from religion to domestic life and the nature of motherhood, all of the pieces presented sought to remedy the poets’ exclusion from wider society. As a minority denied privileges such as the power to vote, the opportunity to write and to bond with an audience outside of prison walls allowed the prisoners to reconnect with lost community and, most importantly, to rediscover a sense of inclusion. In her performance at TED2011, spoken word poet Sarah Kay stated the following: ‘I write poems to figure things out. Sometimes the only way I know how to work through something is by writing a poem’. Poetry possesses a power beyond that of simple expression: it allows the poet to evaluate and to refigure his or her own sense of identity.

It felt strange to suddenly leave the theatre where the performances had taken place. Though the audience had not seen any of the prisoners, nor had they learnt much of the prisoners’ personal lives, a relationship had undoubtedly been formed; not a relationship developed through direct interaction, but instead a bond crafted through the medium of language. Spoken word had once again demonstrated its power to unite poet and audience and to create ‘meaning’ in a society increasingly accused of ‘meaninglessness’.