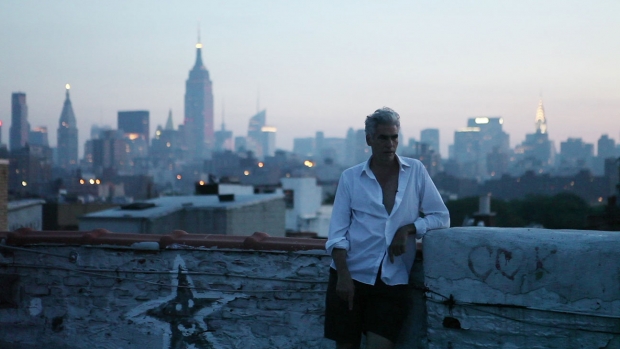 ROBERT STEVENS reviews ‘Homme Less’, a documentary about model and photographer Mark Reay that ‘attempts to make fiction out of reality’.

“Why make fiction when real life is so interesting?”, I overheard a colourfully dressed woman say at a documentary screening in Shoreditch one time. A little over the top perhaps, but then that’s Shoreditch.

Homme Less, though, takes the opposite approach, constantly trying to make fiction out of reality. Thomas Wirthensohn’s directorial debut spends two years in the shoes of New York-based Mark Reay, a 52 year old relic of the American dream. Reay is strikingly handsome and full of charm. He’s a street fashion photographer, an actor and a model for an array of impressive agencies. Reay appears to live a life only shown in glossy magazines. Yet when the façade drops, Reay is revealed to be an exhausted, under-performing and broke man, who sleeps in a small hole on the roof of his friend’s apartment building.

In this sense, Wirthensohn’s documentary works pretty well as a metaphor for the American psyche: always present yourself as more successful than you are, and try your hardest never to let up. Yet behind this obvious metaphor lies the film’s most interesting point. Even when we see Reay as his most vulnerable – and we do: we see him naked, homeless, drunk – there is still a heavy amount of resistance. Even in his darkest moments, Reay never quite seems genuine, but always trying to placate an audience with his sadness. Everything he says feels scripted and slightly false. This is perhaps Wirthensohn’s fault as a director, for he allows Reay to indulge in himself, and never forces him to confront reality.

The desire to see Reay as truly vulnerable speaks to the incessant desire to perform in American society. Reay rarely speaks of having failed in life, but rather clings onto his aspirations. This sense of motivation and hopefulness rarely lets up within the film, and I would have preferred to see Wirthensohn dig deeper into those moments of isolation and self-reflection. Instead, Wirthensohn happily jumps into Reay’s dream world, never pointing out the truth.

As a result, Homme Less often feels frustrating. Though Wirthensohn offers a very valid commentary on American society, with Mark Reay as his vehicle for satire, his passiveness as a director sometimes allows his protagonist’s denial to prevail. Wirthensohn also, with a jazzy score and overly produced photography, presents Reay’s life as cooler than it is. In these moments, I found it difficult to sympathise with a character that isn’t presented as real, but rather a fictional character.

‘Homme Less’ is playing at the DocHouse until 18th February. Tickets are available here.