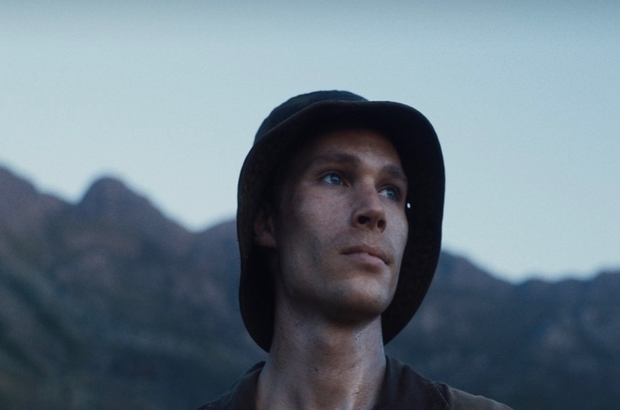 ‘You aren’t people any more. You are scabs: flaky, yellow, pus-filled scabs.’ And with these words we are baptised along with 18-year-old Nick Van de Swart (Kai Luke Brummer) into the South African Military. Set in 1981 during compulsory conscription and the border war between South Africa and Angola, Oscar Hamanus’s Moffie (2019) adds to the established South African genre of grensliteratuur, or, ‘Border Literature’; the film is a triumph that teeters on the edges of borders, exploring the constructed margins that shore up identity.

What with this year’s The Lighthouse and Portrait of a Lady on Fire, the sea seems to have an irresistible pull currently for films exploring the theme of identity. Is this a result of the general mellowing of our contours, our search for something more malleable to define ourselves through? With Moffie, however, we are not allowed the catharsis of an eroding and windswept landscape, but are stuck inland, in an arid terrain. Nick, who has never been to the sea, longs to go, the lingering hope of the ocean floating in the background. The intercut scenes that take us to his past occur in a lido, the closest he has come to this expansive fluidity.

The medium of a war film can show us that the less stable identity becomes, the harder people fight to protect its sovereignty. The more the boys are drilled in fighting, in the importance of protecting their country from communism, of being strong for their women and children — of being racist, of being homophobic — the wider the cracks that begin to show in the veneer. Moffie allows us glimpses of tender weakness. The close-up is Hermanus’s shot of choice, inviting us to share in these individual experiences rather than the homogenous ‘whole’ of the army. The otherwise distant and brutal Sergeant Sachs (Michael Vey) has times where he seems to be longing for the intimacy that his position denies him. The face of the ‘enemy’ is always imbued with an emotional complexity that looks back on us through the barrier of the fourth wall, as if pleading for an empathy that they know is communal, despite the constructed differences.

Braam du Toit’s impeccable soundtrack gives an emotional intensity to the film, that works at times to harmonise with the visual, but more often to strike a discordant note. When we would expect a complimentary sound — epic for the battle scenes, quivering for the emotional — we are offered harsh minor notes or ghosts of melodies that cannot find an aesthetic hook. The way the music alienates us from what we see reflects how jarring the forced homogeneity of the military mindset is, the mismatched identities crowbarred into one.  At some points the non-diegetic sound takes over the diegetic, making Nick’s location as an outsider stark, as if swimming in a pool of detached experience.

Moffie poses the question: who is really being punished by this war? Is it the ‘commies’? The black Angolans? Or is it those within the ranks already, who are not quite ‘Africaans’ enough, are not quite ‘man’ enough — are not quite ‘straight’ enough? Moffie is a homophobic slur, and it is something the boys must avoid being at all costs. In one scene that is heart-breaking and terrifying in equal measure, the dormitory of boys play a military version of spin-the-bottle, beating each other up for fun. Their play-fighting exposes both the constructed-ness of war, as well as the need for complicity from both sides for a ‘game of war’ to work: if one side refuses to play, the victory becomes flaccid. When Nick and Stassan (Ryan de Villiers), who share a tender moment the night before, are placed against one another, neither moves to fight. The discomfort in their initial refusal to fight one another is transferred into an over-compensation: Stassan beats the shit out of Nick. Hermanus shows us that sanction and suppression lead to a precarious enactment of self-punishment.

Hermanus, a black South African, says he initially balked at the idea of making a film about South Africa’s white minority: the kind of worry that many artists seem to struggle with — haven’t narratives of dominance had enough airtime?  But the reason Hermanus seems to have pushed ahead is a realisation that everyone is implicated in these patriarchal battles, even those who fight them, forced to do so without realising. Who, and what, are these boys fighting to protect? Moffie suggests that it is just an ideology of manliness that is fast receding into the horizon on a sinking ship.