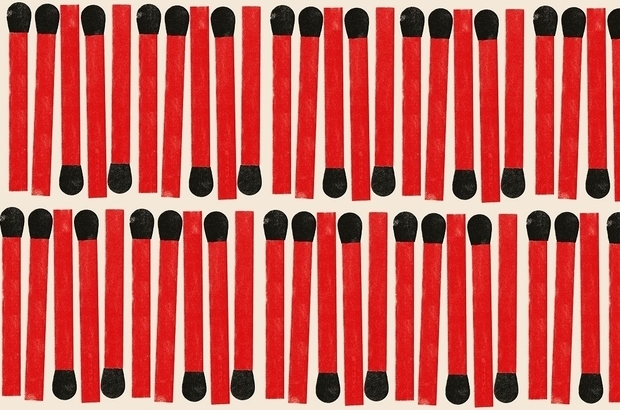 LAITH CAHILL examines the ethics of consensual deception in Moonglow, the new novel by Michael Chabon.

I arrive early. A man beside me is wearing a red baseball cap with one word on the back: Trump; and four on the front: Make America Great Again. Inauguration day has arrived.

I am not there at the demise – or perhaps the beginning – of the American experiment, but in East London. At the Libreria bookshop Elle’s new Literary Editor, Sharmaine Lovegrove, is in discussion with the Pulitzer- winning writer, Michael Chabon. By the time Chabon starts speaking the man, and his red cap, have disappeared.

The Liberia bookshop provides the perfect sanctuary on such a day. It is a reader’s paradise: cozy, crammed, and ordered with a haphazard flair and imagination which suggests that it was you, by some daring feat, that discovered this book. The back wall of the shop is a mirror which makes the shelves, books, and ideas appear endless. Like bookshop, like writer: Chabon’s works often reach beyond the confines of genre. Take The Yiddish Police Department; a ‘hard-boiled detective novel, that is also science-fiction’, set in an alternate universe. Recounting the story of a professor who ‘wouldn’t read my story if it was science-fiction’, it is clear that Chabon has built a career on ignoring such restrictions. In a bookshop where literature is ordered by genre, the author asserts that ‘any good book should appear on multiple shelves’.

Chabon describes his new book, Moonglow, as mirroring Benny Goodman’s song of the same name. It is wistful and lyrical, while also having melancholy, mournful qualities. Framed as a family memoir, the narrator, who like Chabon is American, is a writer, and is named Michael Chabon, recounts the stories his grandfather told him on his deathbed. They are grand stories of the Second World War, presented in a chronological ‘mishmash’. Chabon explains that the genesis of the book was a story about his great uncle, a stationary salesman, who was put out of work by the Alger Hess … or worked with Alger Hess … or had heard that Alger Hess was now a stationary salesman. The news of his grand-uncle’s firing was true – or not – depending on who you asked. Either way Moonglow is as they say in the movies ‘based on a true story’.

Its playful treatment of ‘the facts’ makes Moonglow a novel which engages more than most with the now ubiquitous concept of ‘post-truth’. The book begins with six words: ‘this is the way I heard it’. The sentence is emblematic of the idea that the world can only be accessed as the individual ‘I’ sees it. If I hear it this way, if I see it this way, this is how it is. As the book initially warns its reader, ‘I have stuck to the facts except when they refused to conform to my memory, narrative purposes, or the truth as I prefer to understand it’. The day after my trip to the Libreria bookshop, the US President unconsciously imitated the opening line of Moonglow: the crowds had been huge from where he stood, and this was enough for Donald Trump to claim that the inauguration had been the ‘largest in history’. Chabon’s fiction’s assertion of ‘the truth as I prefer to understand it’ powerfully reflects a ‘preference’ which is spilling over increasingly into real-life.

Starting with its choice of narrator, Moonglow sets out to blur the line between fact and fiction, comingling historical with fictional figures, and family history with invented history. For Chabon, the distinction between the performed ‘truth’ of a novelist as opposed to a President resides in the idea of consent. ‘The consent of the person being lied to. That’s what’s missing in a political relationship.’ Chabon’s reader begins Moonglow with an understanding that it is, to all intents and purposes, a lie. The novel therefore becomes a celebration of the multitudinous nature of shared narratives. It is, as one reviewer remarked, ‘a lie that tells the truth’.

Fiction like Moonglow represents an antidote to ‘alternative facts’ and political discourses which strive to reduce shared narratives to the impoverished singularity of vision offered by the likes of Sean Spicer and Steve Bannon – that ‘that’s what you guys should be writing and covering’. Chabon likens his works to scale-models which try to approximate a whole world – a world that ‘doesn’t have a crack’. Like the mirror in the Libreria bookshop and the numberless books reflected in it, Moonglow’s narrative does not exist in isolation but is inspired by, relates to and interacts with thousands of others. Its model of life is one which, although looking back to the Second World War, is acutely relevant to an understanding of the concepts of ‘truth’ and ‘fact’ in the present day.