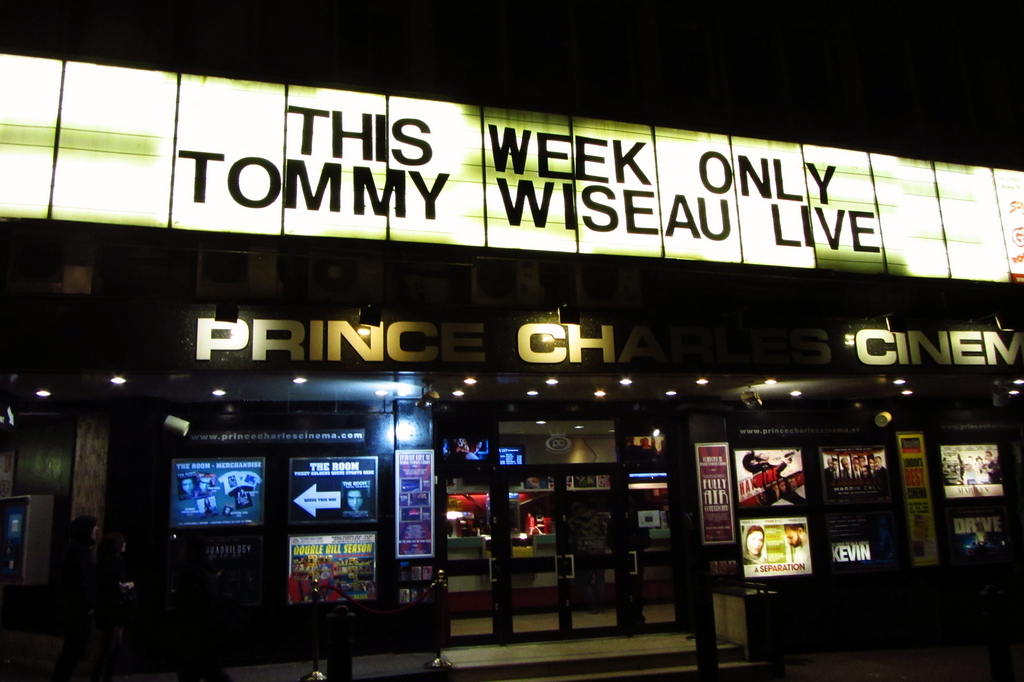 In early February I worked at the Prince Charles Cinema whilst it showed the notoriously awful movie The Room, with creator Tommy Wiseau live on stage. Thousands of people (including SAVAGE) turned up over the course of the weekend for a series of interactive screenings: they quoted along with the film, threw plastic spoons screen-ward, and yelled out witticisms, pointing out the film’s myriad of inconsistencies and idiocies. It was pretty fun.

Tommy Wiseau is an odd man: tall and vampiric, with a tendency to speak in gnomic, thickly-accented proclamations. My first glimpse of him is during the Q&A, where he has clearly developed a shtick; he brushes aside certain questions as boring and laps up flattery. The crowd loves it, but it’s hard to know where the laughing-at ends and the laughing-with begins. Does the scorn bother Tommy? Does he admit to himself they’re making fun of him? When he looks at his bank balance, does he even care?

Somebody mentions The Disaster Artist, James Franco’s biopic about The Room. He has guarded, nice things to say about the cast and crew, although he’s clearly nervous about how he’ll be portrayed. “We’ll wait, we’ll see, you know?” he says. Apparently Johnny Depp was originally billed to play him, but asked for $20 million. “Well, he is a Jew,” Tommy says flatly. Later, when I’m running the merchandise stand with Tommy, I mention that Johnny Depp isn’t actually Jewish. “Well, you don’t know Hollywood,” he tells me.

He then abruptly starts waxing lyrical about a feature on Final Draft that reads out your script’s dialogue; it helps Tommy get a “sense of rhythm”. Just to be clear, Final Draft reads dialogue out in a flat, mechanical, Steven Hawking-esque voice, which is a useless tool for pretty much every writer in existence, except Tommy Wiseau.

Many, many people want photos. At one point a film critic comes up and congratulates Tommy, who is delighted, and oblivious to the sneering irony in his tone. It’s an undignified scene.

I was on the merchandise stand quite a bit this shift, so I got to chat to Tommy lots. He is a man of contradictions. He tells me he’d reshoot The Room frame by frame, changing every actor; later he tells me it’s perfect as it is; shortly after he avers that he would only change the pacing “a lot”.

I hear him saying to one girl that The Room is “100% fantasy” but he later tells me that “all art is biographical”. It’s kind of sad to think that the film is probably founded on some fact – it’s a bitter movie suggesting that everyone (especially women) will betray you in the end. Even sadder, it’s not hard to imagine Tommy experiencing something like that.

We’re talking about film making now; Tommy’s heroes are Tennessee Williams, James Dean and, above all, Orson Wells. The Room’s most famous review called it “The Citizen Kane of bad movies”, so I guess he kind of succeeded.

He tells me he hates it when people think that The Room has bad dialogue; they need to look “behind the words”. To demonstrate this, he picks up a copy of the script and asks for a random line which he will elucidate. I stumble upon:

Tommy says: “Right, so Lisa’s mom is telling Lisa…” [I butt in, and point out that it’s Mark speaking] Right, right. So Mark is saying to Lisa… [No, I interject again: he’s speaking to your character] So Mark is saying to Johnny… what was the line again?”. It’s hard to believe in the meaning behind the words when he struggles with the ones in front of him.

By now it’s pretty obvious that Tommy is using the event to get laid; he asks the manager to announce his hotel room over the PA system. To get a signature you have to buy something – unless you own a pair of breasts, it seems: an implicit rule I don’t exactly feel comfortable enforcing.

One enthusiastic girl from New Zealand realises his sordid intent a little late into their ten-minute conversation. When he keeps telling her his e-mail so that they can meet up, she tries to bail: “okay, got it – I’ll e-mail you!” she says, moving to leave. “Don’t you want to write it down?” Tommy asks; “nah… I’ll remember it.” she says unconvincingly, pivoting and scurrying away.

During a quiet moment, Tommy asks us about a member of staff who died a couple years ago; he didn’t want to ask the manager “in case it upset him”. All of us on the merchandise stand started here too recently to have worked with the guy – in fact, we’re surprised Tommy remembers him. “He was always kind to me,” Tommy says.

I’ve noticed that every time a black person poses for a photo, Tommy happily tells them that Mark was originally played by a black actor, who was changed at the last minute. This suggests to me that Tommy doesn’t know many black people. The responses are always polite, though – it’s clearly meant to be affectionate. Tommy obviously isn’t up to speed on political correctness; during a Q&A discussion of his sitcom Neighbours, he talks of wanting “a Chinese, a black, a woman, a pregnant”. He’s inclusive, at least.

I leave for my break and am replaced by a bespectacled colleague. Suddenly, Tommy angrily beckons his assistant Raul over, getting him to stand in front of him. Everyone is watching at this point, and Tommy grabs Raul, repositioning him as a buffer between himself and the member of staff. He then says, in a loud, irritated voice: “what’s this Harry Potter? Does he know what he’s doing, even?!”.

I watch the film for a fifth time, and it is officially joyless to me: simply a bad film. Sat at the back of the screen on a piano stool, I am suddenly joined by Tommy. We watch the film for a while and he grins conspiratorially. “Good crowd!” he tells me. It’s incredibly surreal, hearing the jeering whilst the creator looks on, but he seems to relish it. I give him my last spoon.

Then, something magical happens – one of the film’s numerous, interminable sex scenes begins. Picture Tommy and I sitting together, shoulder to shoulder, necks craned upwards, silhouetted against the the blazing screen. Movie-Tommy is thrusting awkwardly to an R&B smooth jam. His body is like a statue of a Greek God that was hewn in a hurry, all weird right angles and deep crevices. Yet here he is sat amongst these mere mortals, who stare aghast at the screen. Movie-Tommy’s obloid ass ripples rhythmically.

Again, the crowd’s loud and obvious derision doesn’t seem to bother him. “They have fun, that’s the main part” he tells me, sounding weary but at peace. But then a man yells “your hair is shit!” at his character and Tommy rises, hurls the spoon in his direction, and lumbers towards the exit. He pauses for a moment, taking one last look at the crowd, before disappearing into the rectangle of light.