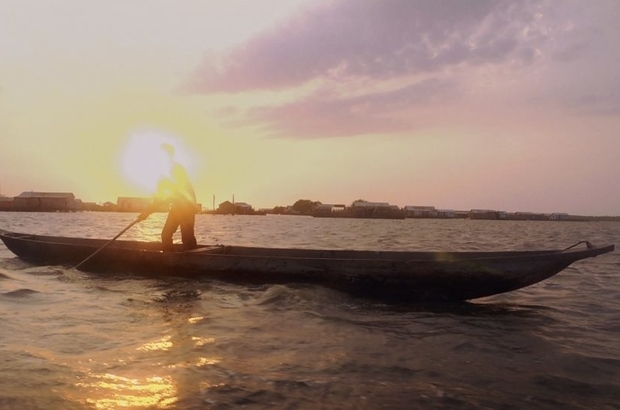 Between sky and water, in the midst of Colombia’s largest lagoon, the small community of New Venice stays afloat despite the harshness of everyday life and the lingering scars of the massacre that fractured them years ago. As a symbol of hope and resilience, the village gathers to repair its only meeting place, the football field.

A woman puts on lipstick. A young man gets a haircut, hoping to look like Cristiano in order to impress the ladies. A group of children fly kites and kick a football around. Life in the fishing community of Nueva Venecia, also known as El Morro, is like that of any other in the world, with one extraordinary difference: the entirety of this village – homes, schools, shops, the lot – is floating just a few feet above Colombia’s largest lake, Lake Tota. Nueva Venecia rises on stilts like a mirage above the waters of the Ciénaga Grande de Santa Marta, located at the heart of the fictional landscape of Macondo, the towns and villages imagined by the Nobel Laureate Gabriel García Márquez in One Hundred Years of Solitude. Like its more famous Italian counterpart, Nueva Venecia is accessible only by boat; wooden, gondola-like canoes connect this amphibian world with the neighbouring towns of Cantagallo and Soledad.

Director Emiliano Mazza de Luca creates a stunning, moving portrait of an intimate community struggling through and moving on from a devastating massacre carried out by paramilitary forces in late 2000. The inhabitants, mainly fishermen, live in close harmony with the swamp that surrounds and sustains them. They are in sync with the rhythms of nature, yet often find themselves struggling to coexist with it. Life is not always easy, and thankfully the director in no way attempts to glamourize their unusual situation, presenting us with an honest and raw portrayal of their often primitive struggle for survival. With the arrival of the rainy season, severe flooding damages homes and property, and the water seems ominous and threatening. Times of drought are followed by a boom period during which the swamp offers up plenty of fish, but these are increasingly scarce and small due to environmental changes and contamination by agrochemicals in the region. This love-hate relationship with the marsh and its cycles is presented powerfully in the documentary, not as a minor inconvenience but as the wearisome, perpetual battle it is.

We see the villagers’ lifestyle, the stories that have marked their skin and soul, and their remarkable sense of belonging to a place that lacks land, fresh water, sanitation or medical services. In a moment of touching humour, the narrator, Jesús Suarez, compares the inhabitants to the village pig, who swims right back to its pigsty shortly after the village has been attacked: ‘It was the first to do what all would do after: return’. Through it all, de Luca masterfully captures the spirit and optimism of a people happy to be alive and grateful for the simple pleasures of life in their fishing village, whether it is pulling up nets full of trout or cheering on the football team as they prepare to face their rivals, Sitio Nuevo.

Hope and dreams are recurring motifs throughout the documentary, as the village children often talk of their aspirations for the future. One girl ardently wants to become a doctor; ‘it is my calling, my dream’, she states unequivocally. A teenager wants to finish high school and get a university education, while another dreams of being a footballer, and has no doubt that he will eventually succeed. A close up on the name of a boat called ‘Mi Esperanza’ (‘My Hope’), later followed by another boat called ‘Sueños Complidos’ (‘Accomplished Dreams’) towards the end of the film, is by no means accidental.

The narrator talks of Nueva Venecia as a place ‘where almost nothing ever happens, and where everything is forgotten out of convenience’. So how does one make a movie out of something like that? Apart from the narrator’s occasional interjections, such as when he describes the events of the massacre in a very matter of fact way, there is a noticeable lack of dialogue. And yet, there is a sense that words are not needed, that the images speak for themselves. Some of the most beautiful shots are, naturally, of the water. The image of the burning sun setting over the lake is truly stunning. The film is always bursting with colour, whether it is the turquoise of the wall paint or the deep red of the water after mercenaries have shot their victims. In one of the most poignant scenes, a man recounts solemnly: ‘after the massacre that took place here, it lost its colour; it turned completely dead. Everything looked sad, pale, colourless… everything had faded. But…today, little by little, we [will bring] colour back’. The village, as well as Emiliano Mazza de Luca, does exactly that.

New Venice is a story about the sense of belonging and the cycles of life, the seasons, the tides, the new beginnings. It is a potent and universal demonstration of having the collective strength to get up after a fall.

‘Nueva Venecia’ was part of the November documentary season, The Lives of Others, at the Bertha DocHouse.