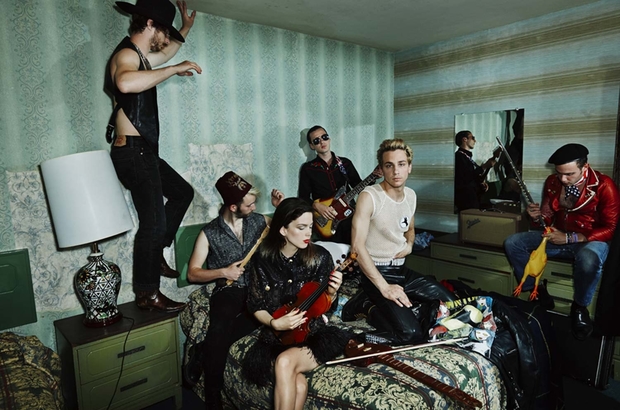 It’s Thursday night and Shepherd’s Bush Empire is full. The audience eagerly awaits French band La Femme to take to the stage; latecomers are still crowded in front of the (cruelly understaffed) bar, desperate to grab a beer and make their way to the stalls. The stakes are high for La Femme. After The Guardian announced them ‘France’s hottest band’ in an article published a few days prior, this is not an evening to disappoint. And disappoint they do not.

It is a few minutes past nine when the first notes of ‘Sphynx’ – the opening track of  the band’s latest album, Mystère – eerily resonate through the space, plunging the crowd into a deep trance, from the front row to the upper balcony. Anybody who has any concern that the French-speaking band will struggle to connect with a British audience is instantaneously reassured; there will be no complainers in the crowd tonight. Rather surprisingly, the band follows their opener with ‘Packshot’, an energetic track (though not their most well known) whose synth bass line is characteristic of La Femme’s stellar first album, Psycho Tropical Berlin. In between songs, the band makes an effort to introduce their next performance, resulting in a comical attempt to explain what their next song ‘Mycose’–or thrush–is about: ‘you know, when you get mushrooms’.

They follow with a few new songs, most notably their latest single, ‘Où va le monde?’, all of which receive a very warm reception from the audience, who dance enthusiastically throughout the show. Forty minutes into the performance, things are taken to another level, as the band plays the opening notes of their feminist anthem ‘Si un jour’; the upbeat intro is electrifying and the lyrics are chanted back at the band with a conviction that conveys the frustrations of our generation – frustrations that La Femme so skilfully capture within their art. Tonight is an escape for 2,000 people; we feel La Femme’s hypnotising sound echo in our bodies, and we let go of all inhibitions.

This exhilarating experience – band member Sacha Got has by now already jumped into the crowd twice – is followed by the band’s biggest hit, ‘Sur la planche 2013’, perpetuating the now well-established frenzy. Bodies are sweaty, drinks are flying, shoes are too. The band continue with two more of their most popular songs, ‘Nous etions deux’ and ‘Elle ne t’aime pas’, before establishing a groovier, suave mood with ‘Exorciseur’. They leave the stage for the first time a few minutes later, but promptly reappear for an encore, which they kick off with an odd choice: ‘Vagues’, a thirteen minute long track. The crowd is sceptical at first, having expected the last part of the concert to be packed with energetic hits; but the song choice soon makes sense, as we sway in unison to the near religious-sounding song and its high pitched, mesmerising vocals.

Before we know it, it’s time for the last two songs of the evening – undoubtedly the strongest part of an already incredibly fierce set-list: ‘Paris 2012’, a bonus track from their first album, and its opener, ‘Antitaxi’. The audience appears possessed: bodies frenetically bounce off each other, dripping with sweat, taking in every note, every second. But the end of the night is nigh; La Femme thank their London fans one last time and leave the stage. Sacha stays behind, banging a few dramatic notes on his keyboard for a few seconds, before the performance comes to an end.

What La Femme gave their audience tonight is a priceless gift–an opportunity to forget the outside world with two thousand fellow strangers, in an exhilarating celebration of music and life, just a year on from the horrific attacks at the Bataclan concert hall in Paris. There was no artifice in the band’s performance. With minimal lighting effects and no stage design, their electrifying presence was enough to deliver one of the most impressive live performances of the year.