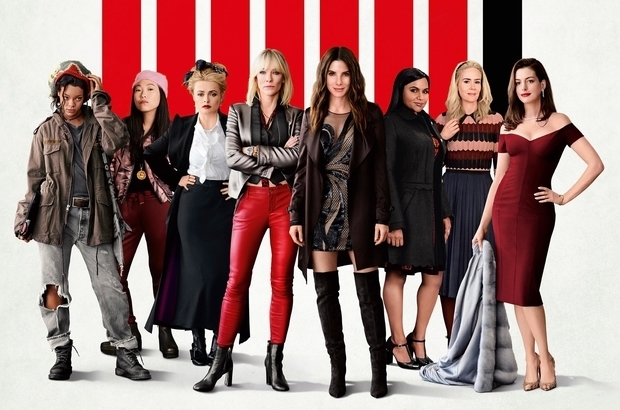 CLARISSA SIU discusses the varying responses to the female remakes of the Ocean’s and Ghostbusters franchises.

One of the most anticipated films of the summer, Ocean’s 8, arrived in UK theatres early this week. A female reboot of the Ocean’s trilogy, its star-studded cast features Oscar winners Sandra Bullock, Cate Blanchett and Anne Hathaway, as well as personalities Helena Bonham Carter, Mindy Kaling, Rihanna, Sarah Paulson, and Awkwafina. The film is centred on Debbie Ocean (Bullock), sister of George Clooney’s Danny Ocean, who recruits a team of modern pariahs to pull off the heist of a lifetime: infiltrating the Met Gala to steal a $150 million Cartier diamond necklace. Following in the footsteps of the 2016 all-female Ghostbusters reboot, much of the discussion surrounding Ocean’s 8 revolves around the gender-swapping of the previous male cast. Both remakes were born from beloved originals but bore a major difference in the way they were received.

As a summer blockbuster, Ocean’s 8 is clever and lively with its engaging plot. It is a delight watching these eight women on screen, from Hathaway’s semi-narcissistic celebrity Daphne Kluger to Rihanna’s nonplussed, genius hacker Nine Ball. When asked if this movie will inspire young girls, Blanchett (who plays Lou, Debbie Ocean’s right hand woman) deadpanned: ‘into a life of crime, yes.’ The film broke box office sales by shooting to the top of the chart, reining in an impressive $41.6 million in its opening weekend. It also earned glowing reviews, while remaining relatively unscathed by online sexist commentary.

This is a far cry from the response to Ghostbusters, which unleashed vitriol from men in all crevices of the internet. The latter harassed the cast with racist and sexist language in the mass of bad reviews left on aggregator sites. The original Ghostbusters is a giant of the fantasy genre and very much beloved by its predominantly male following. The film came out in 1984 and played a significant role in the childhoods and adolescence of these now grown men, whose entitlement sanctified the movie series and rendered it untouchable. What they saw as a ‘feminisation’ of the franchise and the introduction of a new, female and less ‘eligible’ fan demographic ignited such lashing out on the reboot.

Ocean’s 8 was left alone by internet trolls on the account that the original Ocean’s franchise was never quite as treasured as the Ghostbusters series. Compared to the original Ghostbusters, its legacy was much less coveted. Ocean’s Eleven came out in 2001, followed by Ocean’s Twelve in 2004 and Ocean’s Thirteen in 2007. Subsequently, Ocean’s 8 was not so much of a threat to nostalgia, and the immense outrage directed at the Ghostbusters reboot two years before dwindled to a tatter.

One question however lingers: were these female remakes really necessary? Some argue that although empowering, female reboots feel a lot like ‘heated up leftovers’ even as they hold new ideas and concepts. They believe there lies more value in creating original content, taking the examples of psychological thriller Gone Girl and DC superhero film Wonder Woman.

Gone Girl sparked conversations in 2014 when it was adapted from Gillian Flynn’s eponymous book. Psychopathic protagonist Amy Dunne (Rosamund Pike) might not have been a role model, but she certainly thrilled female movie-goers. Flynn wrote the screenplay herself, and Amy’s ‘Cool Girl’ monologue was one for the ages, printed onto T-shirts, mugs, and posters.

Wonder Woman made even greater waves last year. Despite being first introduced in DC comics as early as the 1940s, Diana Prince (Gal Gadot) had never headlined her own movie, even when her contemporaries Superman and Batman scored their fifth and seventh ones. Wonder Woman ended up breaking box office records, grossing $225 million worldwide in its opening weekend with a 52% female audience, which was a 12% increase from the usual 40% in superhero films. Patty Jenkins made history as the first female director to achieve success in the genre, with which she blazed the trail for a sequel scheduled for late 2019.

There may be mixed responses as to whether remakes or original content reign superior, but perhaps neither does. Perhaps they are equally important, and we should be able to choose both. But more important than what kind of women-led cinema is produced is addressing the double standard such films will inevitably be held to: productions by or specifically about women should be allowed to mess up, to fall flat on their faces and fail spectacularly.

To this day, there is still a certain precariousness surrounding female-driven film. Movies, even with great actresses and promising plots, are released with bated breath. Interviews with the cast of Ocean’s 8 were filled with fun and intelligent questions, yet amongst them laid one most persistent: ‘Will this film land?’ Nobody was certain.

Such delicate treatment of female films comes from their scarcity. If it feels like women in the industry have something to prove, it is because the lack of proper representation mounds and compounds the pressure to succeed. Of course, creating a film has its stakes. But where a man is allowed to make a bad movie without jeopardising the opportunities of his peers, the same cannot be said for a woman. Her failures reflect upon her gender and threaten to mar the authority of her fellow filmmakers. Individual pieces of women’s art in a male-dominated industry should not be taken to represent the entire female filmography.

This is why facilitating an honest conversation about women from all backgrounds in film, from cast to crew, is so important. Change may be a slow process that can sometimes feel impossible, but films like Wonder Woman and Ocean’s 8 remind us that the tide is turning – and the future as bright as the diamond necklace Debbie Ocean has her eyes on.

Ocean’s 8 is on general release.