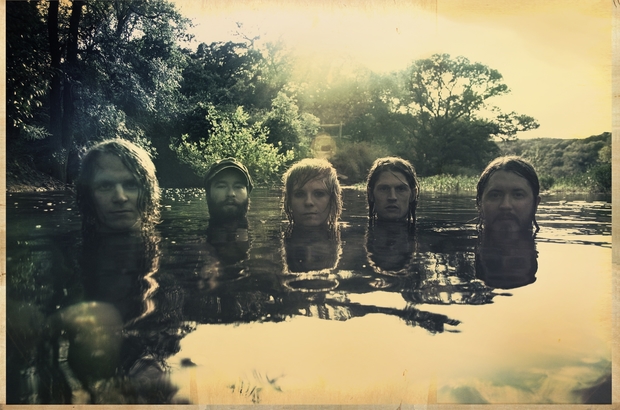 Give your eardrums a heads up before seeing The Black Angels. From the opening note, the band drench the audience in an expansive, metallic sound, a one way system, a closed circuit of lingering chords and scrapes which seems never to pause.

The band are a pseudo-homage to The Velvet Underground: their name itself comes from one of the tracks on the 60s band’s eponymous first album, ‘The Black Angel’s Death Song’. It seems apt, then, that they should walk on stage accompanied by this song. As they settle into their instruments, this soundtrack morphs almost imperceptibly into ‘Currency’, demonstrating the musical debt they owe to the iconic band. Over the ironised sound, lead singer Alex Maas delivers a biting attack on capitalism in a Nico-esque tone: ‘Currency carry me everyone is held hostage/ Currency means nothing/ How are they to spend us next/ Do you want a stake in us’. A huge screen buffers with white noise in the background, adding an exciting visual aspect to the live show.

As the track winds down, Stephanie Bailey’s clear back beat cuts through the metallic ringing, and the band rocket into ‘Bad Vibrations’. Here, ‘The Black Angel’s Death Song’ is reincarnated. The group creates a rich sonic landscape: Maas’s use of loop pedals and driving rhythmical riffs under a torrent of overlapping chords, produces a kind of controlled cacophony.

Then suddenly, a change of mood; the lighting softens. ‘Estimate’ has a nihilistic and sinister feeling as Maas sings with his cap pulled low over his eyes: ‘Never let them shoot you down/ They’re killing our children/ And I’m being protective/ Well I am raising my height, all done/ And I am losing sensation for you now.’ Blurred sounds hang in the background, a mixture of mutated sirens and high-pitched screams; the huge television screen behind the band aids and emphasises the mood of the track.

The dripping paint which forms the backdrop to ‘Black Grease’ enhances the excess in the lyrics; like the paint, Maas’ emotion overflows: ‘But I give give give give I give what I can give’. Throughout the rest of the show, the screen displays a dystopian collage of pictures: a cosmic backdrop is interspersed with images of obedience in a capitalist system, layering gold bricks, rally scenes and gymnasts – it is deliberately unnerving.

During ‘I’d Kill For Her’, the group momentarily abandon the Velvet Underground in lieu of something more like Nirvana, singing of emotional desertion and injustice. Eventually though, the oozing, lava lamp lighting signifies a return to familiar territory during the climax. Bailey ramps up the beat to a 12/8 charge with monumental drum and guitar solos from Christian Bland. The effect is that of a musical thunderstorm with flashes of lightning, creating a sense of drama – but the emotional intensity that usually comes with seeing a psychedelic band is missing.

When this has subsided, The Black Angels produce a song completely unlike any of the previous tracks. More pining, and with a wrenching modulation in the chorus, they lurch into the bombastic melancholy of ‘Life Song’. The lyrics are unsettling: ‘How can I explain/ With no voice/ With no chance/ As I’m traveling upside down/ Into a world of the unknown’. Despite the earnest lyrics, the band maintain a cool detachment from the audience throughout the gig (aided by the strict bouncers, who quell any signs of moshing), which seems at odds with the music. There is very little audience chatter, and the show is more of a spectacle than an intimate interaction.

The Black Angels do not manage to replicate the cultural spirit or nuance of their musical idols; though their live show is imposing, much of it is smoke and mirrors. The all-important connection with the audience is lost, in favour of an expansive sound that feels impressive, but ultimately alienating.