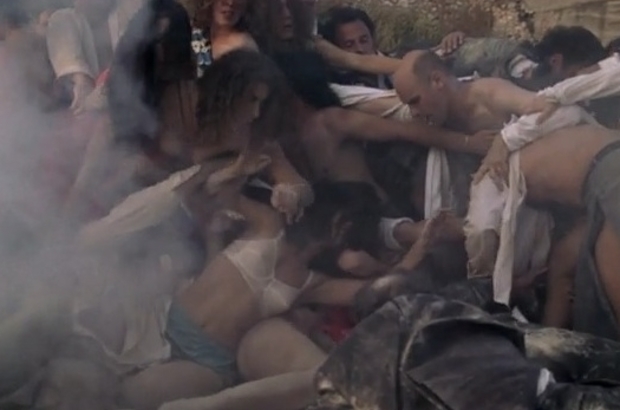 An author is often publicly cast in a political role, their opinion given a clout which artists working in other mediums are rarely afforded. Many have resisted this responsibility, calling for an ‘art for art’s sake’. Yet speaking at LSE Space for Thought literary festival, the award-winning writer Eimear McBride argued that authors should capitalise on the opportunity to make their voices heard.

What makes a work of fiction revolutionary? The answer lies in breaking established conventions of both form and subject; yet praise for McBride’s work often focuses on formal innovation alone. Enamoured critics leapt to compare the author’s fragmentary prose style to that of her fellow Irish writer, James Joyce, yet McBride has come to recognise such comparisons as ‘a way of not being seen’. There was an element of tiredness in the author’s voice as she graciously fielded probing questions about the impenetrable Finnegan’s Wake. Contemporary works of fiction that are as avant-garde as Girl often find themselves brought under the shadow of Joyce’s oeuvre. McBride perceives this as an understandable crutch of literary criticism, however it cannot fail to be a reductive way of assessing a new text.

While it was Joyce that inspired McBride to undertake the writing of Girl, the novel was also greatly influenced by the theatre, particularly the work of playwrights such as Sarah Kane. After reciting a passage from Kane’s monologue, 4.48 Psychosis, McBride remarks that, when writing, ‘I always have one eye on the theatre’. This attention is evident from the dramatic pitch of Girl, which was adapted as a stage play for Edinburgh Fringe in 2015, before a sold-out run at the Young Vic Theatre in 2016. By focusing on likenesses between McBride and Joyce, criticism overlooks the author’s rich sphere of influences, and concentrates on the author’s stylistic radicalism at the expense of analysing her subject.

For McBride, the revolutionary subject is essential. Her debut novel, A Girl is a Half-formed Thing, treats the topic of sexual violence in a way which, as the author says, ‘refuses to make nice’. From the time of Hellenic myth, literature has had a tendency to eroticise the fictional rape of women. McBride sees this as the consequence of a gendered cognitive dissonance. ‘You can see the gaps in portrayals of sexual violence’, she says; ‘when it is being addressed by men, it lacks a sense of horror’. The endurance of this dissonance is rooted in writing which disseminates the myth that women are somehow naturally equipped to deal with or expect sexual violence. Added to which, female writers continue to be deterred from writing men for fear of misrepresenting the male psyche. To confront this double-bind, McBride chose a male victim of abuse as the protagonist of her latest work, The Lesser Bohemians.

Eimear McBride maintains that, ‘so long as you are writing about the world, you are writing something political’. It is impossible to divorce literature from politics, and, surely, we would not wish to do so? Jean-Paul Sartre’s cri de Coeur that ‘il faut s’engager’ (one must engage), taken up later in E. M. Forster’s mantra, ‘only connect’, alludes to an intrinsic symbiosis between creative and political engagement with the world. Even if her works lose something for being translated as the heirs of Ulysses and Stephen Hero, and even if McBride feels that what she says may be ‘less than perfect’, the author is committed to taking advantage of the liminal space she holds between artist and spokesperson. McBride challenges norms of form to fashion a new and revolutionary medium, capable of confronting problematic norms of literature and life.

‘A Girl is a Half-formed Thing’ and ‘The Lesser Bohemians’ are published by Faber. See here for more information about LSE Space for Thought Literary Festival, see here.