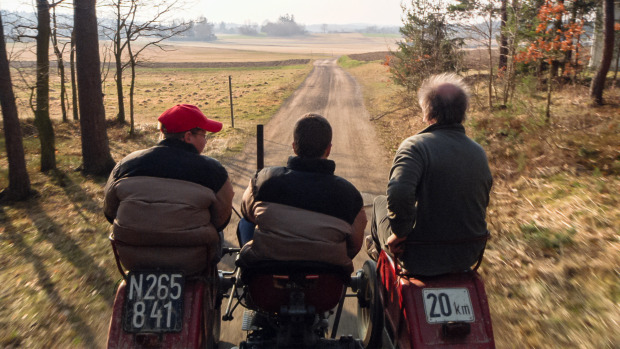 ROBERT STEVENS reviews Nikolaus Geyrhalter’s ‘Over the Years’, a documentary 10 years in the making and playing at the DocHouse this month.

Over the Years is a documentary without any real turning point, climax, or conclusion. It monitors how a group of ex-employees from a textile mill in rural Austria cope with unemployment. Some blossom, finding other jobs in a sparse job market, but others falter and lead closed lives. The premise is dry and thus the film occasionally teeters on the dull, though it rarely falls over the edge. Yet somehow Nikolaus Geyrhalter’s documentary is still excellent: a document of historical and social significance.

Over the Years is three hours long and I’d estimate that an hour of it is composed of shots of houses, or factories, or quarries. I spent ten minutes watching a woman give a Tupperware party. One man’s hobby is to alphabetise and label his collection of 13,000 songs. Yet Geyrhalter’s genius is perhaps found in this acceptance of the mundane. He refuses to alter his subjects for our amusement, neither glorifying nor patronising them.

The film contains many moments of silence, as if Geyrhalter allowed the interviewees themselves to direct the film. Long shots of expansive vistas are followed by factory ruins, allowing a viewer the time to soak up the world Geyrhalter lets us into. The film is also beautifully shot, and the photography in Over the Years is testament to the respect given to the subjects. Following them through an arduous route of unemployment, I never felt forced to victimise Geyrhalter’s subjects, or to see them as anything else than what they were. Sometimes life was dull, other times eventful. Over the Years, paradoxically, is interesting as a direct result of Geyrhalter’s refusal to impress. By allowing his subjects to breathe his story felt grounded in reality.

This is not to say that the film is a masterpiece. Geyrhalter’s ‘no-filter’ approach can be tiresome, and the lack of any real structure during the film means that there is rather little to be taken away from it as a result. Though Over the Years is ambitious in scope, following workers over ten years, it nevertheless feels muted. Geyrhalter never pushes too deeply into his subjects’ lives, preferring to keep a professional distance. As a result, the film is pleasant and respectful, and never quite manages to lose itself in its stories.

Regarding documentary filmmaking, there is a lot that can be taken away from Over the Years: how to listen to interviewees, how to shoot a beautiful film, and so on. Geyrhalter provides some brilliant educational resources here, but the lack of any driven narrative during the three hours can make the film sometimes feel like a slog.

A factory floor may never be interesting, but the story is coloured with enough characters – all interesting in their own right – to allow complete voyeurism into people’s lives. Although, as it turns out, this voyeurism seems to involve a lot of people eating breakfast in silence, or taking the dog out for a walk, or transferring the alphabetised CD collection from paper onto computer. Geyrhalter shows us as much as he can, for as long as he can. Having taken ten years to film, Over the Years demands a similar level of patience from its viewers.

‘Over the Years’ will be showing at the DocHouse on Sunday 7th February at 2pm. Tickets are available here.