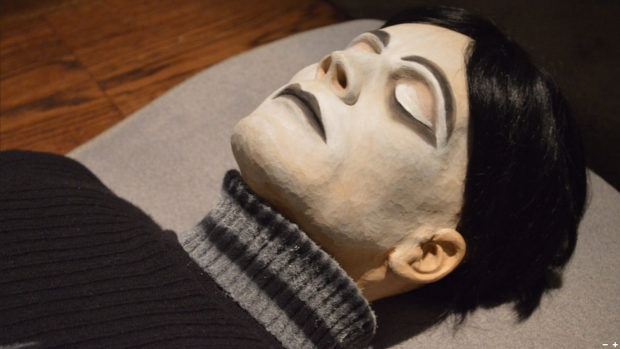 ELIZABETH ATANASSOVA reviews States of Mind at the Wellcome Collection.

The States of Mind: Tracing the Edge of Consciousness exhibition at the Wellcome Collection is all about consciousness. Its curator, Emily Sargent, sets out to discover or at least question subjects such as why we have subjective experiences, and what makes us who we are as individuals. The current exhibition, is as immersive as Ann Veronica Janssen’s yellowbluepink installation, which started this series of exhibitions at the Wellcome Collection, and consisted of an intensely smoke- and colour-filled room. Items appear to be organised almost like a labyrinth, yet the viewer moves through it smoothly, echoing the seamless way in which we we move from one thought to another.

The exhibition shows us how beautiful the mind can be. The first room Science & Soul is particularly striking. Experimental works such as Louis Dargent’s Thought Photographs, which supposedly caught peoples’ thoughts on camera, make us appreciate the aesthetic and the beauty of what may have come from the mind. Furthermore, the exploration of conditions such as synaesthesia makes us realise how exciting our perspectives of the world can be, and the exhibition suggests that this is a condition we can effectively learn. Some people live in a world where letters have different dimensions of colour, and Jean Holabird imagines Vladimir Nabokov’s perspective, by displaying the letter A with “the tint of weathered wood”, or the letter E which “evokes polished ebony”. We can see that other, more specifically visual artists such as Vladimir Kandinsky, live in a universe where the world of sound is like a colour wheel.

The further we move, however, the darker the tone of the exhibition becomes. In the Sleep & Awake room the viewer is introduced to the darker side of the mind. This room explores the potential darkness of the subconscious during its dreaming state. The articles about sleeping murderers make this clear. The lighting is dimmed, Carla Mackinnon’s installation haunts us with murmurs of peoples’ experiences of sleep paralysis; this immersive audio has an almost schizophrenic quality – these are similar to voices in your head that you do not want to hear. The murkiness of colour and sound remind us of introspective confusion and discomfort. Goshka Macuga’s Somnambulist is a particularly disconcerting piece; the uncertainty as to whether it is a real man sleeping or not, echoes the familiar confusion of being unable to distinguish dreams from reality. The viewer is deliberately brought to the conclusion that we may not be able to rely on the version of reality our minds create; the creation of false memories, for example, is a phenomenon which supports this.

The exhibition forces us to question our identity. It forces the viewer to confront the possibility that we are not in control, and puts forward the empirical idea that we are created and moulded by our memories and experiences. Crucially, the exhibition prompts an awareness of the sheer fragility of the human consciousness. The exhibition explores mental conditions such as aphasia, amnesia, minimally conscious states, and vegetative states. These can be triggered by everyday events and the exhibition’s inclusion of these conditions serves to underline the viewer’s awareness of their own mental fragility.

Overall, States of Mind leaves the viewer with a profound sense of awareness of the depth, complexity and beauty of the human mind. Being confronted with the inside of the mind, and the extent of what we do not know about the consciousness is an unsettling, yet important experience. The way in which the exhibition forces the viewer to confront their own mental fragility is appropriate and significant. It allows us to begin to discard an ignorance of the self which appears all too common in today’s world. We live in a society which is increasingly filled with distractions, and a myriad of different negative images which can influence our minds and our physical selves. Perhaps the increased awareness of oneself, which the exhibition prompts, echoes an increasing public awareness of practices such as mindfulness and meditation. It seems that in an age where we are simultaneously divorced from our inner selves whilst desperately trying to reconnect with them via practices such as mindfulness, States of Mind is very much a topical exhibition.

The ‘States of Mind’ exhibition is on at ‘The Wellcome Collection’ until 16th October, however the current layout continues until 24th April.