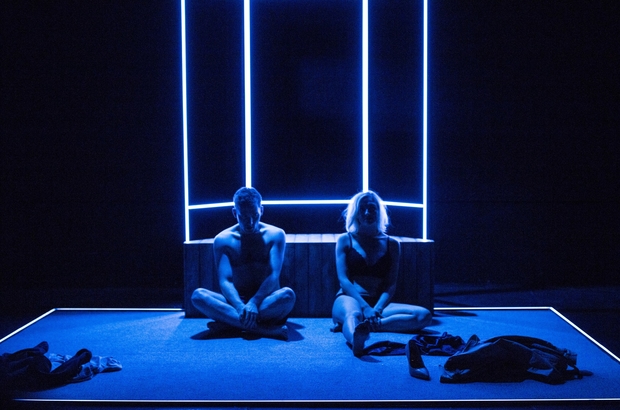 Punts tackles a host of taboo issues in only an hour and a half, ranging from prostitution to mental illness, besides the more conventional focal points of theatre such as gender politics, class, and family relationships. The production succeeds in such an ambitious and sensitive project by delivering an extremely original story with a good dose of humour.

There is a single, simple plot: Jack (Christopher Adams) has a learning disability which causes him social difficulties, so his parents (Clare Lawrence-Moody and Graham O’Mara) hire him a prostitute, Julia (Florence Roberts), to ensure he won’t miss out on sexual experiences. As expected, there are complications, although disappointingly these are largely unaddressed and the play ends abruptly and without closure. The obvious comparison to this production is The Curious Incident Of The Dog in The Nighttime, which despite being more family-friendly is not quite as profound as Punts: where the former almost emphasises and, at times, appears to humourise the isolation and disability of the main character, the latter focuses intently on the relationship between characters, such that it is hard to pick out a main character, in the traditional sense, at all. This is refreshing in a society which so glorifies individualism.

That said, Julia is perhaps the most interesting character and certainly the one who delivers the main messages of the production. In arguments with Jack’s parents, she makes statements such as ‘being a sex-worker empowers me’ and questions the stereotypical view of sex-workers as dirty and sleazy women of no morals. Writer Sarah Page has incorporated the discussion of sex-work into the play with admirable subtlety: Jack’s father asserts ‘you take pride in having power over men’, inverting common assumptions about power and exploitation, especially in regards to gender.

Julia is revealed to Jack to be more multifaceted than he anticipated. She explains that her goal is to become a carer; in fact, she is already volunteering at the local care home. The discourse between Julia and Jack’s parents make clear that her employment is on the basis of care; to care for Jack’s sexual wellbeing. This assimilation is incredibly eye-opening and approaches the debate over prostitution in a very pragmatic manner. It is clear early on in the production that Punts is not simply a cry to legalise prostitution but is a nuanced discussion of the very nature of care and sex-work together. Is Page suggesting not only the need to legalise sex-work, but the need for sex-carers as a new role entirely within society?

Addressing again the abrupt ending, perhaps the lack of closure is due to the fact the play would be impossible to end without undermining the questions it asks. Regardless, the production is so funny that it is bound to leave you with a desire for more at its close. If the important topics above have gripped you and you are happy to be confronted with lines such as ‘it’s difficult to wank over something your mum sent you’, Punts is an unmissable comedy with some heavy ideas to mull over besides.