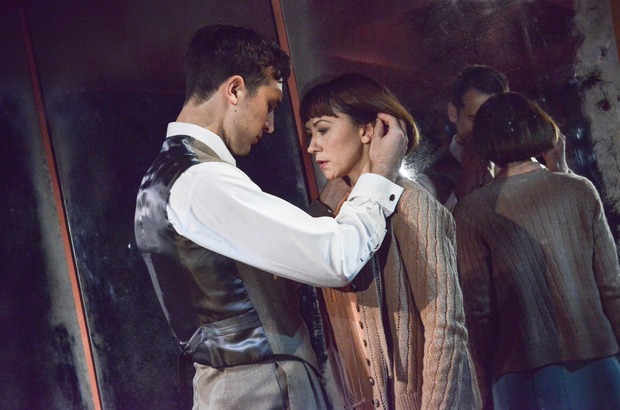 Red: the colour of desire, the colour of blood. A bed is centre stage, bathed in red light tinged with pink; there is a sweaty, sordid quality to it. Entering the intimate performance space, one has the impression of stepping inside a uterus or a murder scene. Grimy mirrors reflect this bloody light, enhancing the overall sense of sanguinity and seediness. The audience has stumbled upon the aftermath of a battle between Eros and Thanatos, the Greek for Desire and Death. What ensues in Kiss Me are the events that lead to this picture of death and sex.

The play is set in London, 1929. A generation of men have fallen in the Great War, and as such, few are now alive to procreate. Stephanie, a widow, is desperate for a baby, but conscious of the societal opprobrium she will attract if she becomes pregnant. Despite this concern of censorship, she contacts the suggestively named Dr Trollop, requesting that she dispatch a man to impregnate her and grant her the child she so yearns for. The man she receives, Dennis, is curiously restrained in manner for someone intent upon having sex, and insists on a series of ‘parameters’ decreed by Dr Trollop herself. Dennis’ purpose is strictly to make love, not to fall in love – is role is purely procreational.

Dennis (Ben Lloyd-Hughes), a devilishly attractive regular sperm donor, may believe that his incessant procreation is in defiance of death, but the eventuality of sex is the same as that of war. A Freudian slip occurs when protagonist Stephanie (Claire Lams) searches for the word ‘procreation’, only to utter ‘procrastination’ instead – reproduction merely delays the inevitability of our mortality. Sex is resistance, but resistance is futile. The bloody light that illuminates the stage prior to the performance imagines the conclusion to this existential struggle.

The play does, however, imply that life is more than a perpetual struggle between sex and death, and that sex is more than merely a means of procreation. Director Anna Ledwich admits in the performance programme that lovemaking as a resistance to death is somewhat clichéd, but a compelling cliché that resonates with the viewer in the current political climate of fear and division. She describes such small acts of ‘communion and resistance’ to be the ‘strongest weapon’ against the uncontrollable forces around us. The play has a nihilistic streak, but in opposition to this are the moments of humour, pleasure and something approximate to happiness.

Ben Lloyd-Hughes portrays Dennis as a strangely withdrawn character, whose sexual raison d’être is somewhat at variance with his upright conduct and stiff, awkward mannerisms. The execution of his arrival encapsulates these seemingly contradictory aspects of the man: the doorbell rings, a blackout occurs, and when the lights come back on, there he is before Stephanie, like a phantom of wish-fulfilment in a Freudian dream. There is a long silence as he stands there, nothing more than an objectified means of procreation… or perhaps, as becomes increasingly evident as the play progresses, an embodiment of desire.

Pregnant pauses arise from him regularly in the play as he cranes his neck, opens and closes his mouth – lost for words – and visibly ponders how to interact with a woman so human and so full of life. He initially approaches sexual intercourse as one would a medical procedure: impersonal and confidential, arousing his patient with minimal stimulation, meanwhile attempting to suppress any metaphysical emotions that may encroach upon this most expert of operations. 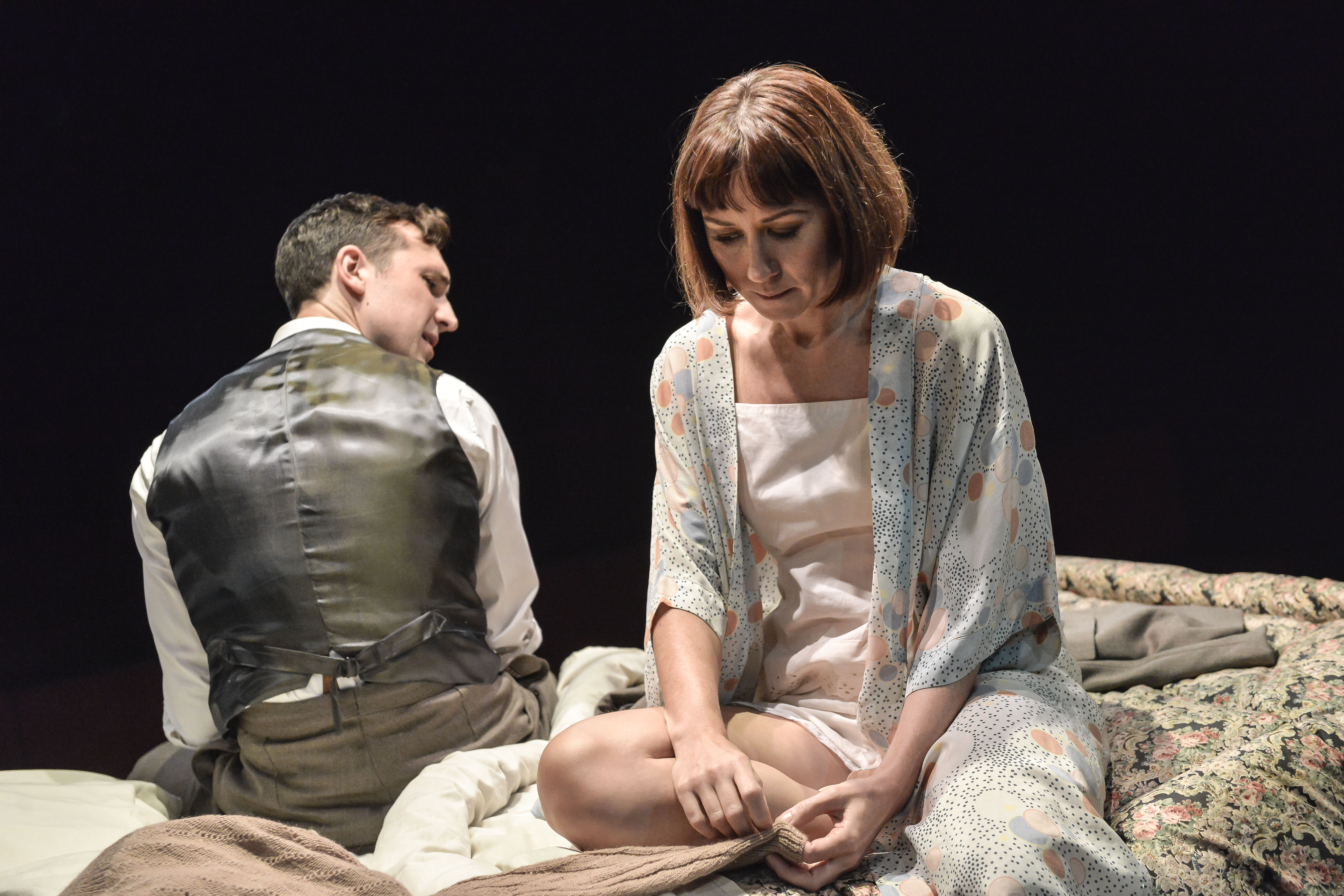 However, Dennis’ doctor façade gradually but surely slips away, revealing the vulnerable and deeply flawed man beneath. Stephanie’s charm disarms him, challenging his insistence on anonymity and detachment, pressing him to reveal his secrets by disclosing information about herself. Claire Lams’ portrayal of Stephanie is reminiscent of her character in BBC’s Call the Midwife. She exudes warmth and affability, producing jokes, amusing quips and offering her ravishing wish-fulfiller cups of tea and biscuits, as though he is merely around for a quick chat and spot of supper, rather than a more intimate pass-time. Freudian overtones pervade these scenes to darkly comic effect. In accordance with the prescription of anonymity, Stephanie agrees to adopt a pseudonym, only to learn that the one she initially chooses is the name of Dennis’ mother. References to Freud continue, acting as a form of dictate no less restrictive than those that arise from social pressures. Love is not necessarily the erotic antithesis of what Freud terms as the ‘death-drive’ alone: it can be something pleasurable, enjoyed and contained within the moment. While Dennis mostly remains a somewhat awkward character, Lams skillfully conveys Stephanie’s development in confidence, as she embraces pleasure for the sake of pleasure, rather than procreation.

Parallel to the Thanatos/Eros opposition is that between freedom and boundaries, expression and suppression. The word that seems to be spoken most frequently by Dennis is ‘parameter’, and the invocation of such disrupts moments of sexual intimacy. Stephanie perceptibly overcomes her inner parameters of restraint and encourages Dennis to do the same, but external and internalized boundaries repeatedly prevail. Real life ultimately impedes any further romance after a dream-shattering revelation enforces another social parameter that neither Stephanie nor Dennis feel able to contravene. Some of the characters’ exposition on this matter, as well as on the subject of Freud and their own backstories, can at times seem a little unnatural; in monologuic moments the discussion of Freudian theories becomes clunky. Nonetheless, the exploration of such themes adds an interesting layer of meaning to the proceedings.

Kiss Me challenges idea of sexuality and gender roles in a way that is inconclusive yet highly compelling. Though certain aspects of the play are nihilistic, there are indications that there is more to life than reproduction and death: there are the moments in between. It explores themes of death and sex, intimacy and restraint with considerable success, and skillfully presents and challenges Freudian ideas. Most provocatively of all, it draws parallels between the battlefields of World War One and the bedroom. Anna Ledwich injects the production with this sense of optimism, while also emphasizing through stage direction and lighting ideas of sex and love implicit and explicit in the script. The result is utterly intruiging.