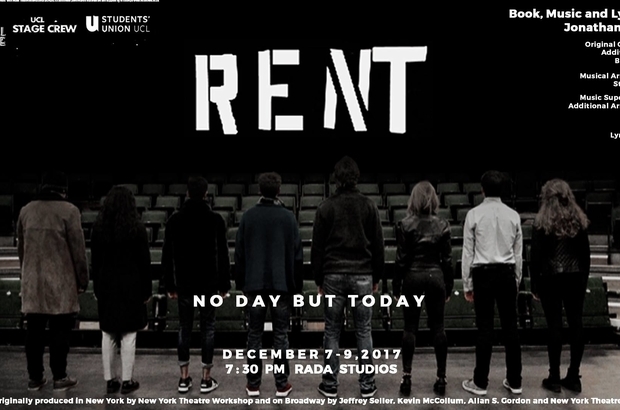 As a play set over Christmas, the last weekend before the end of the Autumn term was the perfect time to see the UCL Musical Theatre and UCL Stage Crew production of Rent. The stage is bare but decorated with fairy lights, and as Christmas music plays gently in the background, the audience eagerly awaits the performance.

Jonathon Larson’s musical tells the story of a group of young, broke, bohemian artists living in New York’s Alphabet City in the late nineties, many of whom are HIV positive. We observe the musical partially through the lens of lead character Mark (Matt Ginno) and his camera, as he films the lives of his roommate Roger (Simon Whitaker) and their friends. We are gripped from the opening number, ‘Rent’, performed by these two strong leads, neither of whom can afford to pay their rent. There is little dialogue throughout the show, the story being told instead through an array of upbeat numbers as well as slower, more poignant songs, making the performances technically challenging as well as emotionally exhausting. The ensemble, however, remains unfazed, and the cast as a whole are very vocally strong — so much so, that they make the performance seem deceptively easy.

This production deftly balances light-hearted stories of love and friendship and the darker themes of the musical: poverty and the AIDS Crisis. A standout comedic force is Christian Thevathasan’s Angel: a drag queen who, for example, kills an irritating dog to earn one thousand dollars (‘that dog is now in doggy hell’, she brays in ‘Today 4 U’). This comic characterisation weighs against the sensual performance of ‘Out Tonight’ by Alice Signell as Mimi, a junkie and Roger’s lover. Another standout song from Mimi is ‘Light My Candle’ where she meets Roger for the first time. The only light in this scene comes from the flame of the candle that Roger lights for her, reflecting the constant lack of electrical power for the residents of Alphabet City.

Another beautifully performed relationship is that between the promiscuous Maureen (Catrin Harris) and her equally feisty girlfriend Joanne (Ahilya Murkunde). A particularly memorable scene is Maureen and Joanne’s duet in ‘Take Me or Leave Me’, with Harris and Murkunde excellently depicting the strong-willed personalities of their characters by almost shouting in one another’s faces and standing on the table before they storm off: ‘Guess I’m leaving’, they both declare. Despite these more light-hearted moments, the danger to many of the main characters (including Roger, Mimi, Angel and his boyfriend Tom Collins, portrayed by Abel Law) of HIV is never explicitly stated but its threat is ever-present, reflecting the stigma behind the virus which has stifled open conversation about it both in the nineties and (unfortunately) to this day. Amongst the comic scenes, the more tender moments of the musical are excellently performed, the most striking of these perhaps being Angel’s death scene, where Dan Edge’s direction has the distraught Collins carry his boyfriend’s limp body onto the stage; this scene acts as a stark contrast to Thevathasan’s previous flamboyant and entertaining performance.

At heart of the musical is the contrast between the comic and the moving: this is most clearly embodied by the final song before the interval, ‘La Vie Boheme’, a shameless celebration of freedom and the bohemian lifestyle. This episode begins with a mock funeral for the apparent death of bohemianism, followed by the whole cast starting a coordinated clapping routine during the body of the song, creating an atmosphere of excitement and energy. We laugh at the song’s dismissal of the mainstream, but it also serves as a poignant reminder that many of these bohemians will be killed by HIV or die in poverty. In this scene and many others, the strong chemistry between the cast members shines through: they are entirely deserving of their standing ovation and, as this is closing night, the close friendships between the cast members themselves are evident after the final number, ‘Seasons of Love’.

This engaging, entertaining production left the audience buzzing and humming the songs all the way home (and shamelessly listening to the soundtrack on repeat ever since). Rent reminds us of the importance of living while we can: as Mimi so wisely says– ‘there’s only this: forget regret, or life is yours to miss’.