GENEVIEVE MORGAN reviews Bliss at the Finborough Theatre, a play By Fraser Grace based on Andrew Platonov’s 1939 short-story.

1921. The Russian Civil War has just ended. A young soldier returns home from the front, his vision of life stained by the traumas of war. A place in history so abhorrent that it is impossible to illustrate exactly, this play does not attempt to present suffering through explicit images and shock tactics. Rather, it leaves the audience to decode such horrors through silences, through disturbed, still faces, dark metaphors and intricate symbolism. In a theatre with a capacity of only around thirty people, the intimacy of the traverse stage, upon which actors are oftentimes less than a foot away from audience members, immerses you in a profound study of psychological torment, of living when you see no life around you nor feel any within yourself. As always, the cessation of war does not mean peace, the healed wound does not mean restored health, nor does the return of the soldier mean that he has survived.

The walls either side of the stage are dusted with white, save for the imprints of where crosses and religious icons had once hung, now dark chasms of nothingness. These spaces of nothingness are characteristic of the whole play. What is left in this world are holes: holes in families, in society, in communication, in the heart. We sense the play’s heavy loss through the long silence that reigns the opening scene and in the presence of a character on stage for the first hour and a half who has no dialogue. In a way, this hole in communication continues even when the characters start to speak, because they rarely say what they mean. For instance, Lyuba (Bess Roche) and Nikita (Jesse Rutherford), a young couple who try to make a life together out of post-war remains, speak about ordinary things like the happenings of her day or the weather, but the tears in her eyes and quivering of her mouth as she speaks suggests how silent she is in what she really wants to say. Nikita speaks politely to his wife, but at the approach of evening he withdraws from her, takes long walks and is unable to lie next to her. The hole of intimacy in their marriage is, like the crosses on the walls, only noticeable not from what is presented, but from what isn’t.

Fraser Grace creates space in this world for some tender moments. Lyuba sees and seeks to fill the holes around her, she cobbles a life together out of what is left for her. At one point, Nikita asks her why she loves him, and she replies that she does so because she can. When she has nothing left, no family, no food to feed herself nor wood to the fire, she looks to what she does have: a heart that still beats. And a heart that still beats is a heart capable of love. The idea of making what you can out of what you have left is also inspired in the play’s set design. The set consists of wooden crates that are moved around and stacked on top of each other to create different locations: the inside of a house, a workshop, stepping-stones over a river, a market and a courtroom. The fact that the same, simple props are used to represent all of these different places compounds the message that life can be made out of collateral, it is a case of what you do with what you have left.

Another of the play’s tender messages is said in the words of Lyuba but is also omnipresent throughout. Talking to her husband, she says that nothing good can be achieved alone. For her, this means that husband and wife need each other to exist, they provide a purpose for the other to live. We also see this in the relationship between Mikhail (Patrick Morris) and Nikita, father and son, who give each other meaning. In a discourse on the criminal system in the second half of the play, this dualism is represented by the gramophone that needs the record to make sense, or the artist who needs the medium of the art… Alone, the thing has a function but cannot operate, but as a pair they form a relationship, they form an entity, a unit, a meaning.

There are many despondent messages that can be taken from this post-war play: dark realities and disturbing truths alike. It makes you think not just of the horrors of war, the men who do not come back and the fate that awaits the ones who do, but the delicacy of the human mind in general, which cannot move fluidly between war and peace as though a machine that can be switched on and off. The sights and experiences inform the mind, and so its exposure to life must be moderated to keep it afloat. Man is not like the dehydrated plant that is brought back to life with water, such extremities between life and death will kill him.

This despairing message is certainly manifest in Bliss, but there is something that keeps the audience from leaving utterly dejected: the determined care that Lyuba and Nikita have for each other. Where there is a commitment to not give up on someone, an understanding of and forgiveness for their ills, there is hope that the person is still alive, for he still strives to live as he was intended to, in love, in bliss. Where there is love, hope dies last.

Bliss ran at the Finborough Theatre until 11th June. 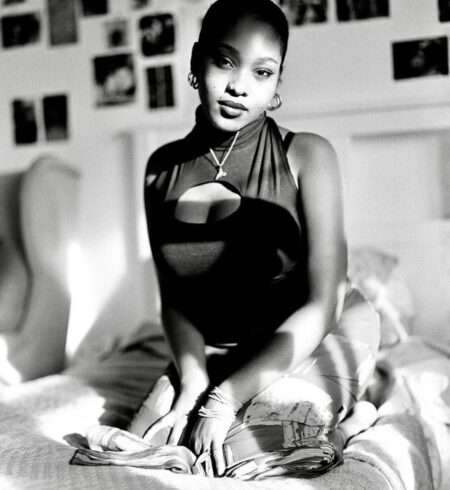 KIMI ZARATE-SMITH interviews Natanya Popoola.  Natanya is an old friend. I have always admired her considered creative practice, the way in which she is inspired..
Read More