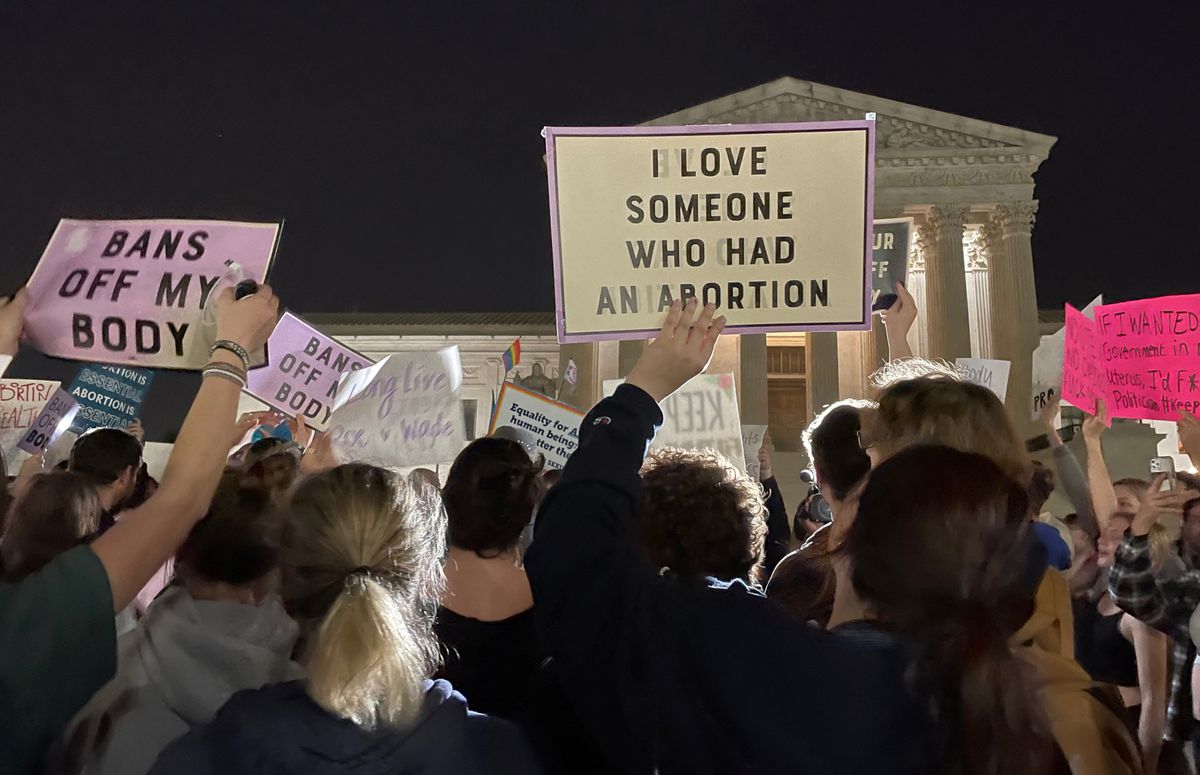 SUNISHKA KAPUR  ruminates on the US Supreme Court’s potential overturning of Roe v. Wade, in light of the leaked draft of the majority opinion. NB: This article was written before the Supreme Court ruled to overturn the ruling, on 24 June.

Upon proposing a near-total ban on abortion, Rep. Jean Smith, an Ohio lawmaker, received a question in response: if a thirteen-year-old girl is raped by a serial rapist, or ‘more likely’ by a member of her family, would she be forced to carry this foetus to term? Yes, is the simple answer. And the resulting child would be, in her words, ‘an opportunity for that woman… to make a determination about what she’s going to do to help that life be a productive human being.’

To reiterate: a hypothetical thirteen-year-old girl, hardly a ‘productive human being’ in herself (I certainly was not at that age), has been relegated to the back benches of her own life in favour of that of another. A hypothetical thirteen-year-old girl who has been raped by a family member not only has to carry the mental trauma for the rest of her life, but also the physical product of such an event. The hypothetical child, in turn, is forced to carry the burden of potential birth defects that arise out of inbreeding. The problem is that this is not, and will not, remain merely a hypothetical. The problem is that a reality like this could face millions of women across the US, should the Supreme Court’s overturning of Roe v. Wade come to fruition, and I am tired of it.

The news of the possible overturning of Roe v. Wade – the legal precedent that permits abortions based on the Fourth Amendment’s ‘right to privacy’ – comes following a leaked draft that reveals this to be a majority opinion within the Supreme Court. Four out of the five justices who voted in favour of the bill were men. If this largely masculine seizing of feminine agency is fulfilled, abortion laws would be decided on a state level, with twenty-six out of fifty states expected to ban or severely limit access to abortion, with women facing jail time as a consequence. Jean Smith’s proposal is one of many across the States that could impact all people with uteruses, regardless of their stance between pro-life or pro-choice. This is an objective truth. I implore you not to underestimate how dehumanising this will be – reducing women into mere vessels for foetuses. Every single one of these is a real person with individual hopes and aspirations for their own life.

The successes of the pro-life movement, then, stunt the development of women, both physically and in life. A hypothetical child is one thing, but these women are not abstract – they are real, and their stories can be ugly. To tell their stories is to humanise them when lawmakers strive to do the opposite.

We need only look to Argentina, where Jean Smith’s hypothetical girl manifests into a real eleven-year-old, known only as ‘Lucia’, who was raped by her grandmother’s partner and subsequently became pregnant. The law was on her side, stating that women are entitled to an abortion if they are raped. ‘I want you to remove what that old man put inside of me,’ she pleaded. The middle-aged men that reigned jurisdiction over her body chose not to. The child, who, according to her doctor, ‘wasn’t developed, and was playing with toys and her mom’, was forced to have a C-section, and was repeatedly given steroid shots disguised as ‘vitamin shots’ in order to ‘help the baby’s lungs develop’. The life of this child became secondary to that of a foetus who was deemed unlikely to survive. Are the ironies of the label ‘pro-life’ at all obvious here?

In both cases, women lose their autonomy and humanity. Lucia was prodded and poked with steroids that would certainly have caused her harm – but no matter! Pro-lifers must fulfil their quest to vitalise this premature foetus! The baby died two weeks later.

Jean Smith’s shift in language exemplifies the same point. She was asked about ‘a thirteen-year-old girl’, and she answered with regards to a ‘woman’. If she is a woman, surely she must have all the democratic and legal rights afforded to her? If she is a woman capable of raising a child, surely she should also be entitled to adopt one? No, of course not. She is a woman at eighteen, when some parts of the law dictate her to be, but she is also a woman at thirteen, when another part does. It is not just women’s bodily autonomy that is under threat, but how they can define themselves, as well. Why is it that what it means to be a ‘woman’ is so loose and pliable in the hands of others?

What happens to these women, then, when they are granted the right to make their own decisions? A friend who has had three abortions told me that she felt she ‘had no choice… I was very young the first two times, under twenty-one, and I could not tell my parents. It was out of the question; I could not even look after myself, let alone another life. The last time was difficult for me, as I was a bit older, but again I was in an unhealthy relationship, and it wouldn’t be an environment to bring a child into.’

I have to question, at this point – isn’t this the more authentically ‘pro-life’ stance? To consider not just the quality of life that the potential child would have, but also that of her own. For when I ask where she would be should she have had to carry that foetus to term, she responds: ‘In a completely different situation to now. Because of those abortions, I have been able to finish my degree and eventually one day contribute positively towards society. Whereas if I didn’t have the choice and had to bring an unwanted child into the world, I know I would have a life of struggle and wouldn’t have had the support from my family that I do now’. Or as Simone de Beauvoir puts it, when a woman is ‘freed from nature, she wins control of her body. Relieved of a great number of reproductive servitudes, she can take on the economic roles open to her, roles that would ensure her control over her own person.’

So this much is clear: forcing women to carry their pregnancies to term doesn’t necessarily result in the life of a child – and often detracts from the life of a mother – and when women are given control over their own bodies, they are liberated. In other words, the ‘pro-life’ movement is not necessarily ‘saving lives’, but it is controlling and restricting women. Our physical bodies are marred, our economic freedoms impaired, we are not granted the basic human right of autonomy over our own bodies, and even how we define ourselves – as ‘women’ – is not ours to decide. Women are relegated to the negative space: we are not people that have the responsibility to live our own lives, but stepping stones to ensure that other people can.

Roe v. Wade, too, is characterised by the negative. As Dorothy Roberts argues, understanding reproductive rights as negative rights grounded in privacy (rights to be free from government interference), rather than as positive freedoms (rights to actually do something, including having the necessary resources) has harmed low-income women through policies such as the 1976 Hyde Amendment, which bans the use of federal funds for abortions. In other words, understanding abortion as a private matter does not provide concrete protection for abortion access, or address other reproductive rights that are equally important.

So even the measures that permit abortion are saturated in irony. Is the intensely private and intimate nature of abortion actually observed? No – the existence of this very discussion spotlights it as a public issue. At the same time, by framing it as a right grounded in privacy, the action of abortion itself is cordoned off, made to be less of a natural freedom. What women do to their own bodies is their own business – until it’s not. It becomes something abstract, something furtive, discussed through the lens of legislation and statistics rather than the side effects of trauma and emotion that women endure. Even as women, the private nature of abortion means that we don’t always realise its universality. Confronting the clandestine associations of abortion is necessary, yes, but instead of attempting to restrict it altogether, we must humanise it, as we would with any other operation (do we perceive cancer as happening to only one type of person, for example?).

Subsequently, we need to understand that this is not merely an issue that affects only the most vulnerable in society. An attack on reproductive rights is an attack on all women, and I should therefore not need to confront you with shocking cases of children forced to give birth to their rapists’ child. I should not need to rapidly fire off statistics (now seared into my brain), in case I need to defend my reproductive rights to anyone who tries to claim ownership of them. Restricting abortive freedoms doesn’t actually make the number decrease (it actually increases); more women die because they opt for illegal, unsafe abortions instead.

For so long, the argument against abortion rights has been reduced to statistics. But Lucia is not a statistic. That thirteen-year-old girl in Ohio will become real. The fact that one in three women in the UK have had an abortion means that you will almost certainly know – and love – at least one of them. Equally, women across America are scared. The eighteen-year old Texan is ‘terrified’. 70% of Americans are against – each in their own way –  the capture of their body in a battle that they don’t necessarily have any say in.

It is difficult to express the same terror that I feel in writing this. I am frustrated, I am angry, I am emotional, I am left breathless in the constant struggle to progress even the slightest amount. Let it be clear: we will never be liberated unless our bodies are liberated, unless we have the power and the right to choose, unless we resist our constant condemnation to the role of baby-carrier, unless the life of an unborn foetus does not supersede the life we may live should we have the same unrestricted opportunities as men, unless all women everywhere can achieve this in the same manner. At the same time, Roe v. Wade was always imperfect. It must be built up again from the ground up, it must operate positively, and it must have agency to reach out and protect all women equally in their right to make decisions over their own bodies. Roe v. Wade may be struck down, but we shouldn’t have to be.