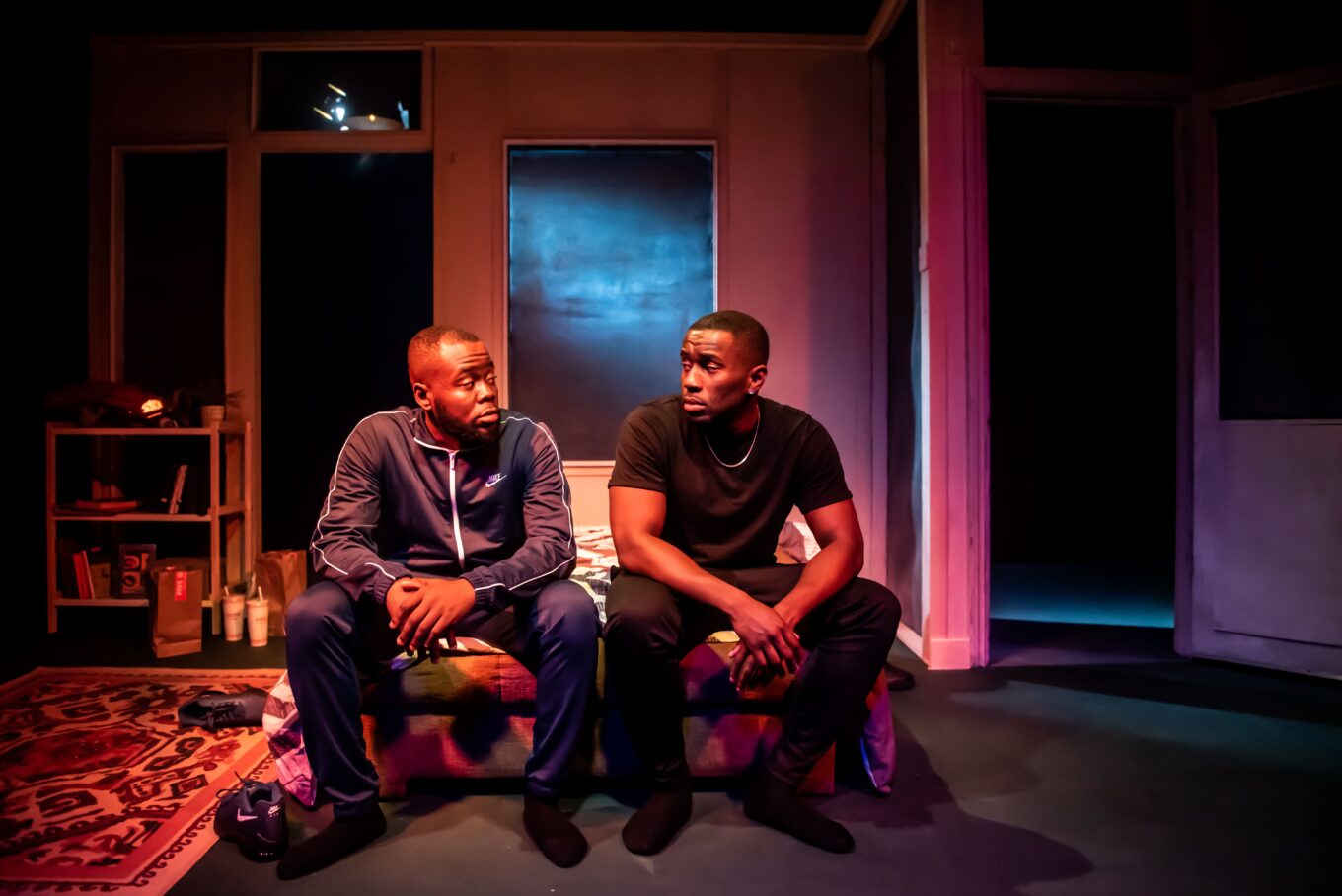 I’m pregnant, and the baby is yours’. One sentence and Daniel and Meera’s lives are set. Still in university, they are going to have a baby. Disowned by her religious Muslim family at the announcement of her pregnancy, Meera moves in with Daniel, his fervent Catholic mother and his sister. Life seems to resume its course, with a loving family, a seemingly stable relationship, and a precarious balance between university and earning money. But everything falls apart when Leon, Daniel’s best friend, kisses him.

With Foxes (2021), author and actor Dexter Flanders brings to the fore seemingly irreconcilable issues, in a clash between upbring and identity. The play, divided in three acts, explores the complicated intersection between sexuality, race, family and religion in today’s London, showcasing a little represented reality experienced by many within London’s Caribbean community. The play is deeply sincere and down to earth, with its script interspersed with British slang. Scene changes are made to a carefully calibrated playlist alternating between rap, gospel and pop, religious lyrics  reminding the audience of the centrality of the subject to the play. 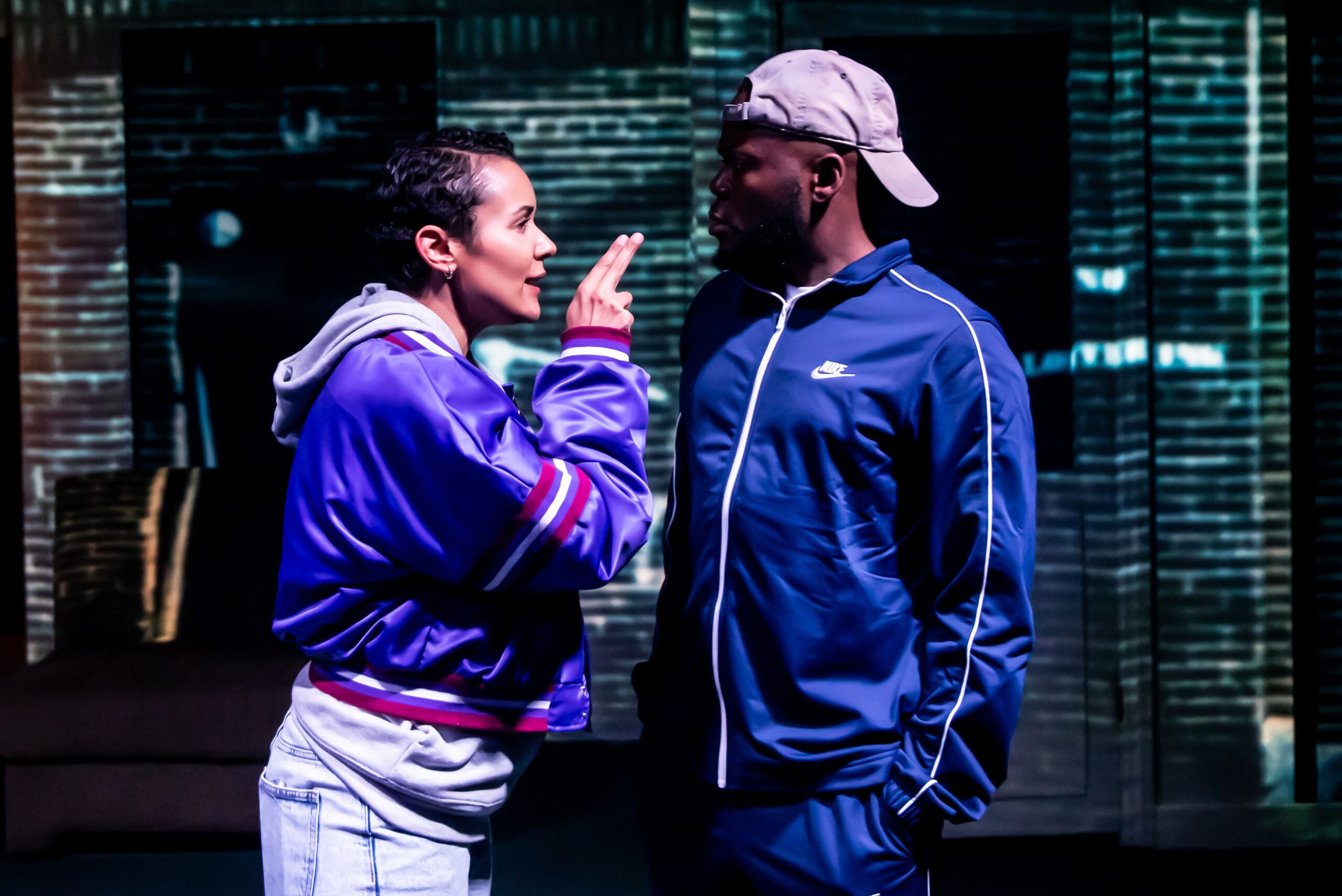 Following Leon’s kiss, Daniel is initially overcome by anger: ‘Are you fucking mad?’. Outrage is however quickly followed by dismay, and confusion, when Daniel wonders ‘what is that feeling, what’s fucking with my head?’.

The play highlights the doubts that plague Daniel, and the tension that keeping this heavy secret induces in his relationship with his surroundings, hurting the people he loves most. However, once he musters the courage to share his secret, he is faced with a reaction he did not expect, and finds himself alone in the world. His only way back to his family is to negate his emotions and pretend to his mother that he has had a change of heart, which rid him of ‘all the nastiness’ and brought him on the ‘right way’.

The success of this play stems partly from the depth of the characters, the intricacies of their psyches truly bringing Flanders’s text to life. Throughout the play, both Daniel (Michael Fatogun) and Leon (Anybe Godwin) deliver the moving and powerful performance of two conflicted men, forced, as foxes do, to live concealed in the shadows. Godwin, in particular, embodies the contradictions of the eternally closeted man, when he laments the lack of a ‘brother to connect with’, referring to the scarcity of openly gay black men he could identify with.

Daniel’s mother (Doreene Blackstock), is full of paradoxes. A pious Christian, she takes Meera under her wing, and preaches acceptance and respect for all, all the while encouraging her son whom she sees in disarray to ‘do what you have to do to get yourself right’. However, it is in the name of this same religion that she cries ‘thou shalt not lie with mankind as with womankind’ and chases her son away at the revelation of his homosexuality.

As for Deena and Meera, respectively the sister and pregnant girlfriend of Daniel, both characters are depicted as strong women struggling to find a balance between social and familial expectations and their identities. Among other things, Meera’s questions about her pregnancy could not be more relevant today, with the current debates in the United States to overturn the landmark 1973 Roe versus Wade decision, which would once again strip women of basic rights regarding their bodies, indeed suggestive that LGBTQ+ rights will be the next target of conservative judges. In the deadlock of his characters’ situation, Flanders manages to introduce a few moments of humour, such as Leon’s reply to Daniel’s doubts on his sexuality: ‘this ain’t no free trial you know’.

The skillful use of lighting mirrors the minds and emotions of the characters, with shadows cast over those in doubt, or wavering under the weight of heavy secrets. The projections on the walls is one of the highlights of the production, allowing a myriad of diverse worlds to come to life, without any real change of scenery or furniture. The audience follows the protagonists’ journeys through busy streets, alleys and even a Foot Locker, without ever leaving the living room of Daniel’s mother. 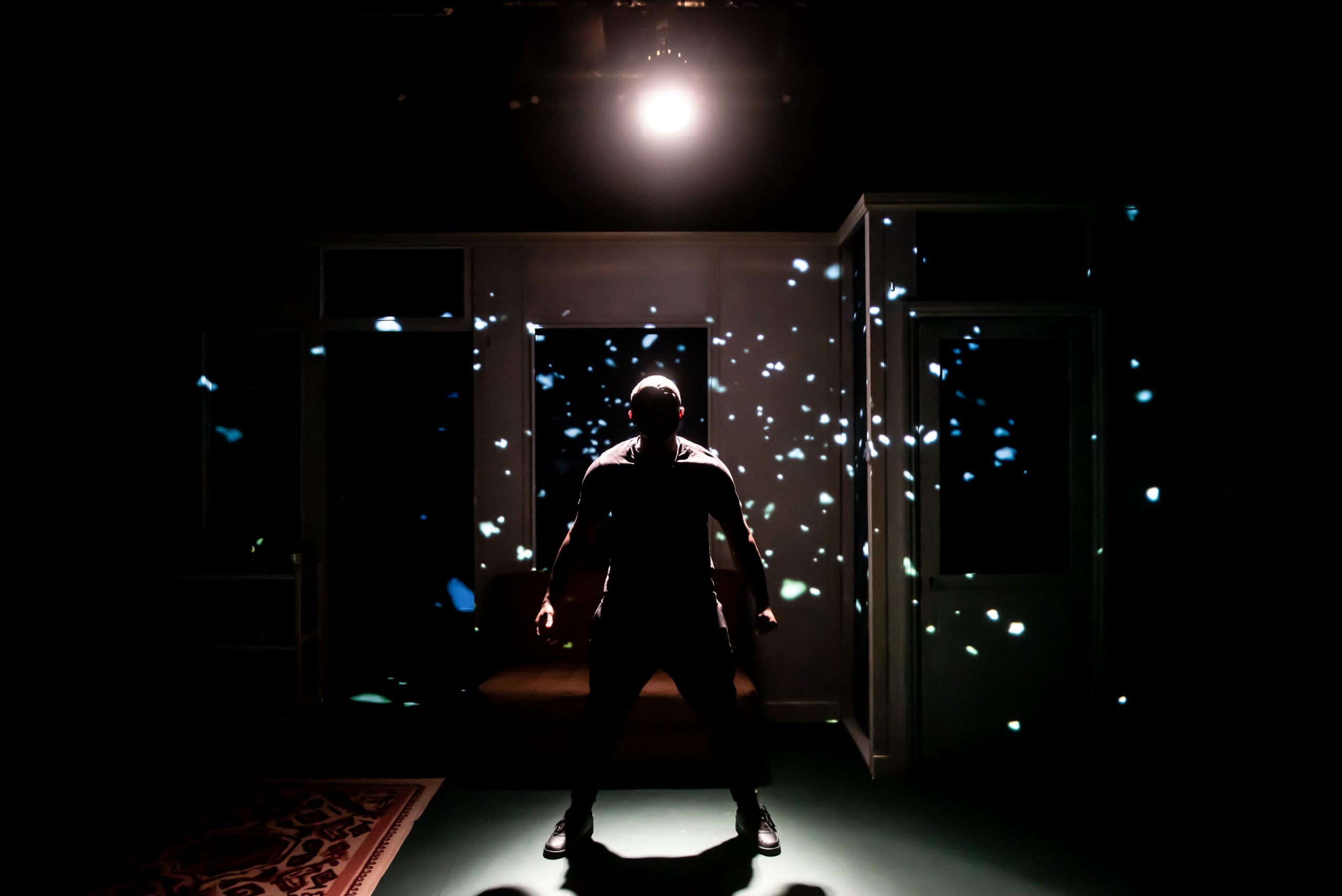 Throughout the play, short scenes are interwoven with the main plot in an attempt to explore the twists of Daniel’s tortured mind. During such moments, the only light on the stage is a kind of ‘snowflake storm’ projected on the wall. Daniel can be seen either alone or surrounded, unable to free his arms from invisible ties, preventing him from moving, and unable to scream. Throughout the play, these moments inside Daniel’s mind intensify, reflecting the existential questions running through him.

The ending of the play seems a bit of a hasty outcome for the extremely complicated themes it addresses; Foxes deserved an additional half hour to develop its characters’ outcomes, such as  the barely touched upon upward class mobility story of Daniel’s sister, Deena. However, the play manages to successfully convey Flanders’ argument that, in an epoch where acceptance and integration are increasingly advocated, and where media and culture appear to be more inclusive for members of the LGBTQ+ community, Daniel, and many others like him still have to hide away in order to avoid having to make the impossible choice between identity and family.